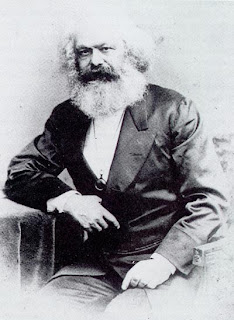 It sometimes seems as though there isn't much new to say about Marx and his theories. But, like any rich and prolific thinker, that's not actually true. Two articles featured in the Routledge Great Economists series (link) are genuinely interesting. Both are deeply scholarly treatments of interesting aspects of the development of Marx's thinking, and each sheds new light on the influences and thought processes through which some of Marx's key ideas took shape. I will consider one of those articles here and leave the second, a consideration of Marx's relationship to the physiocrats, for a future post.

Regina Roth's "Marx on technical change in the critical edition" (link) is a tour-de-force in Marx scholarship. There are two aspects of this work that I found particularly worthwhile. The first is a detailed "map" of the work that has been done since the early twentieth century to curate and collate Marx's documents and notes. This was an especially important effort because Marx himself rarely brought his work to publishable form; he wrote thousands of pages of notes and documents in preparation for many related lines of thought, and not all of those problem areas have been developed in the published corpus of Marx's writings. Roth demonstrates a truly impressive grasp of the thousands of pages of materials included in the Marx-Engels Gesamtaushgabe (MEGA) and Marx-Engels Collected Works (MECW) collections, and she does an outstanding job of tracing several important lines of thought through published and unpublished materials. She notes that the MEGA collection is remarkably rich:


A second point I want to stress is that the MEGA offers more material than other editions, not only regarding the manuscripts mentioned above but also with other types of written material. If we look at the material gathered in the MEGA we find examples of several different levels of communication. We may think of manuscripts on a first level as witnessing the communication between the author with himself and with his potential readers. On a second level, his letters give us notice of what he talked about to the people around him. And, on a third level, there is the vast part of his legacy that documents Marx's discourse with authors of his time: his excerpts, the books he read and his collections of newspaper cuttings. (1231)

Here is a table in which Roth correlates several important economic manuscripts in the two collections. 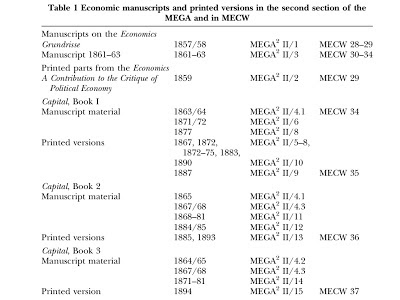 Careful study of these thousands of pages of manuscripts and notes is crucial, Roth implies, if we are to have a nuanced view of the evolution and logic of Marx's thought.


They show, first of all, that Marx was never content with what he had written: he started five drafts of his first chapter, and added four fragments to the same subject, each of them with numerous changes within each text. (1228)

And study of these many versions, notes, and emendations shows something else as well: a very serious effort on Marx's part to get his thinking right. He was not searching out the most persuasive or the simplest versions of some of his critical thoughts about capitalism; instead, he was trying to piece together the economic logic of this social-economic system in a way that made sense given the analytical tools at his disposal. Marx was not the dogmatic figure that he is sometimes portrayed to be.

There are many surprises in Roth's study. The falling rate of profit? That's Engels' editorial summation rather than Marx's finished conclusion! By comparing Marx's original manuscripts with the posthumous published version of volume 3 of Capital, she finds that "Engels inserted the following sentence in the printed version [of Capital vol. 3]: 'But in reality [...] the rate of profit will fall in the long run' " (1233). In several important aspects she finds that Engels the editor was more definitive about the long-term tendencies of capitalism than Marx the author was willing to be. For example:


Therefore, Engels continued, this capitalist mode of production 'is becoming senile and has further and further outlived its epoch.' Marx did not give such a clear opinion with a view to the future of capitalism, at least not in Capital. (1233)

She notes also that Engels was anxious about Marx's unwillingness to bring his rewriting and reconsideration of key theses to a close:


Shortly before the publication of Volume I of Capital, Engels worried: 'I had really begun to suspect from one or two phrases in your last letter that you had again reached an unexpected turning-point which might prolong everything indefinitely.' (1247)

The other important aspect of this article -- the substantive goal of the piece -- is Roth's effort to reconstruct the development of Marx's thinking about technology and technology change, the ways that capitalism interacts with technology, and the effects that Marx expected to emerge out of this complicated set of processes. But this requires careful study of the full corpus, not simply the contents of the published works.


To understand Marx's views on technical change, his whole legacy, which is also comprised of numerous drafts, excerpts, letters, and so forth, must be considered. (1224)

Roth finds that Marx had a sustained interest in "the machinery question" -- essentially, the history of mechanical invention and the role that machines play in the economic system of capitalism. He studied and annotated the writings of Peter Gaskell, Andrew Ure, and Charles Babbage, as well as many other writers on the technical details of industrial and mining practices; Roth mentions Robert Willis and James Nasmyth in particular.

The economic importance of technical change for Marx's system is the fact that it presents the capitalist with the possibility of increasing "relative surplus value" by raising the productivity of labor (1241). But because technical innovation is generally capital-intensive (increasing the proportion of constant capital to variable capital, or labor), technical innovation tends to bring about a falling rate of profit (offset, as Roth demonstrates, by specific counteracting forces). So the capitalist is always under pressure to prop up the rate of profit, and more intensive exploitation of labor is one of the means available.


In the discussion in the General Council [of the IWMA], Marx argued that machines had effects that turned out to be the opposite of what was expected: they prolonged the working day instead of shortening it; the proportion of women and children working in mechanized industries increased; labourers suffered from a growing intensity of labour and became more dependent on capitalists because they did not own the means of production any more .... (1246)

It is also possible that Marx took for granted a secular tendency for falling profitability and thought that the task was to explain it even in face of its being periodically arrested or even reversed. Roman Rosdolsky for example has collected several quotes, presumably not all additions from Engels, in which Marx asserts the centrality of a tendency to falling profitability in the dynamics of capitalism.

According to Bernice Shoul, Marx did not properly acknowledge his debt to JS Mill's attempt to understand capitalist dynamics in terms of a tendency towards falling profitability counter-acted temporality until a stationary state was realized.

Rosenberg reminds us that Marx did not reduce technical change to only the labor=saving kind. Marx (and here some of the quotes may come from Engels) was also interested in the technologies that allowed for the faster turn over of capital and the access to wider markets that made possible economies of scale. Some of these technologies are what we call today ICT.

MacKenzie revisits Marx's ideas that some technologies are developed and introduced to weaken labor's bargaining position. So Marx put power at the center of his study of technical change.

John Bellamy Foster has been interested in Marx's recognition of the ecological consequences of what we today call industrial agriculture.

Hi Dan, thanks for this post. I'm a philosophy professor and I want to include a short reading or two on Marx and technology in my spring philosophy of technology course. Any suggestions of things good for undergraduates? I'm finding a lot, but am having trouble separating wheat from chaff.