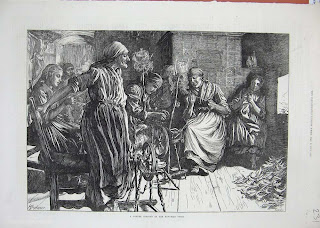 The concept of proto-industrialization became an influential one in economic history in the 1970s and 1980s. The term refers to a system of rural manufacture that was intermediate between autarchic feudal production and modern urban factory production. Variously described as rural manufacturing, domestic manufacture, cottage industry, and a "putting-out" system, it was a dispersed system of production that used traditional methods of production and extensive low-paid rural labor to produce goods for the market, both domestic and international. Unlike modern capitalist manufacturing, proto-industrialization did not depend on rising labor productivity as a source of higher profits; instead, merchants increased the scale of their businesses by extending production to additional households and workers.

One of the first to use the term was Franklin Mendels in 1970 (link), who applied the concept to extra-urban manufacturing in Flanders in the eighteenth century.  Peter Kriedte, Hans Medick, and Jurgen Schlumbohm's Industrialization Before Industrialization

provided an extensive historical and theoretical treatment of the phenomenon in 1977.


It has long been known that industrial commodity production in the countryside for large inter-regional and international markets was of considerable importance during the formative period of capitalism. (1)

What are the chief economic characteristics of a stylized proto-industrialization system of production?

In order for rural industry to develop on a large scale in a region, several factors needed to be present: extensive demand for manufactured goods by concentrated populations and developed patterns of trade; a concentration of merchant wealth; and a population of under-employed rural householders who could be recruited into sideline manufacturing employment.  Peter Kriedte explained the regional pattern of emergence of proto-industrialization in terms of the different forms of power possessed by lords in different parts of Europe:


The power-constellations and their impact on the spatial expansion of industrial commodity production were different in east-central and eastern Europe.  Peasants were more directly and more firmly dominated by their lords, and there was little room for the development of rural industries....

But whether a region developed rural industries or not was determined not so much by the extent of feudal charges as by the form in which peasants paid them. And the form of payment was determined not only by the social relationship in the narrow sense between the feudal lord and his dependent peasants but also by the overall relations of production. (18)

This argument is similar to that offered by Robert Brenner in his explanation of different courses that agricultural development took in different parts of Europe (link).

The regions where proto-industrialization developed earliest, according to Kriedte, were in western Europe:


The first regions of relatively dense rural industry had developed in England, the southern Low Countries, and southern Germany in the late Middle Ages. The decisive thrust which brought about the phase of proto-industrialization came at the end of the sixteenth and in the seventeenth centuries.... Quantitative changes in supply and demand combined to produce a cumulative process which led to a new phase. (23)


When proto-industrialization gained a foothold in a region of commercial agriculture despite these basic assumptions, special circumstances are usually responsible.  First of all, commercial agriculture, generally, could only develop in a highly urbanized region.  The concentrated demand of a large town or a whole network of towns was necessary in order to induce the self-sufficient peasant family holding to enter on the path of specialization. (27)

Hans Medick emphasizes the micro-side of the equation -- the economics of the peasant household in the late Middle Ages.


The central feature of the 'rationality' underlying the family economy is the fact that its productive activity was not giverned primarily by the objective of maximizing profit and achieving a monetary surplus.  The maximization of the gross produce rather than the net profit is the goal of family labour. (41)

In other words, the peasant household is governed by the dynamic that leads to "self-exploitation" in the sense described by Chayanov -- use of family labor to the point approaching a marginal product of zero (The Theory of Peasant Economy

). Under these circumstances, it is economically rational to expend some family labor on sideline manufacturing if there is some income associated with this activity -- no matter how low the wage.

PI is described as transitional because its economic possibility was created by the political situation of feudal cities -- specialized manufacture in cities under a regulated guild system, self-production in the countryside.  And, it is sometimes claimed, proto-industrialization prepared the ground for a full modern systems of capitalist industry.  The "transition" scenario might be framed along these lines: 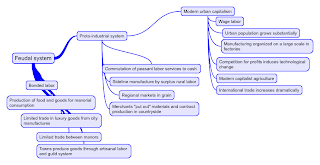 But it is also possible that proto-industrialization was an alternative to capitalist development -- a cousin rather than a grandparent.  Here the diagram would look differently: 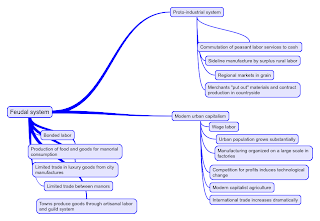 Proto-industrialization is a significant historical phenomenon, we might say, because it represented a large and marked change in the organization and volume of production of goods from the medieval period to the early modern period.  Towns and cities were already economically active locations, representing both concentrated demand and concentrated production.  But the rural population was almost entirely involved in farming and sideline production for home use.  The emergence of a significant level of production in rural hinterlands was a shift, and so it is worth asking why this change occurred in the circumstances in which it did.  The change dynamics Kriedte, Medick, and Schlumbohm describe include population change; urban economic regulations; incentives for feudal rights-holders to transition to cash obligations; and the existence of inter-regional trade and markets that extend beyond the local village.

Several questions are especially pertinent to the study of this phenomenon.
Here are some relevant causal factors that might be invoked in formulating answers to these questions:
It is tempting to frame this problem in the terms offered by Thunen and early economic geographers in "modeling" the economic changes that would be predicted on a featureless plane populated by economically rational agents (VON THUNEN'S ISOLATED STATE an English Edition of Der Isolierte Staat

). Imagine a sort of "SimCity" simulation that begins with a sprinkling of mid-sized towns and cities with given levels of production and trade regulated by guilds, located within a countryside consisting of manors with serfs and small peasant farms.  There is trade between town and country, since the towns must import food for the urban population, and there are some goods needed in the countryside that cannot be produced there.  But trade is limited, labor mobility is limited, and the market economy is only a small fraction of all economic production.  The actors in this story are merchants, lords, bonded serfs, free peasants, and officials.  Now postulate that the actors respond rationally to some set of changing circumstances.  Which of various initial scenarios lead to a proliferation of rural manufacture?

We might postulate that merchants have only a few accessible strategies for achieving a return on their wealth.  Investing in production and trade is one such strategy.  Town-based production was heavily regulated, however, and the opportunities for profits were limited.  A large under-employed labor force was available in the rural periphery of the towns.  So a strategy of "putting-out" materials and paying low wages to rural producers was an attractive one.


This discussion relies heavily on a very specific set of historical and institutional characteristics -- the economic and demographic conditions of Western Europe in the early modern period. But it is interesting to compare these developments with some similar patterns in China's economic history. For example, consider Mark Elvin's description of merchant-based manufacturing in Ming China in The Pattern of the Chinese Past

.  It is also interesting to compare the very different analysis in Charles Sabel and Jonathan Zeitlin's World of Possibilities: Flexibility and Mass Production in Western Industrialization

There is no substitute for detailed analysis of the actual situations. One can think of lots of factors that might encourage "putting out" - cheap rural labour, higher costs in urban areas (not just wages and regulatory costs, but also the higher urban disease burden), lots of pre-conditions (transport, markets for the finished goods, a suitable technology of production, suitable social and political conditions...).

There is no a priori reason to believe that the balance - or the factors - will be the same everywhere.

Thank you for taking your valuable time to create this very helpful, well written and concise post, it is genuinely appreciated.