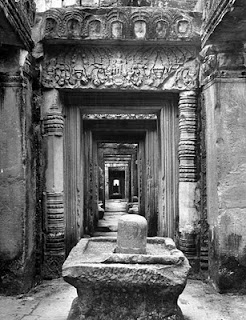 Victor Lieberman is probably the leading historian of Southeast Asia writing in English today. His primary focus is Burma, and throughout his career he has done a masterful job of piecing together the political, cultural, and economic history of the succession of Burmese polities over a millennium, using materials in many local languages.

he documents a degree of synchrony among widely separated polities that demands explanation. (Here is an earlier discussion of his programme in Volume One; link.)


Between 1240 and 1390 the principal realms of mainland Southeast Asia collapsed. The same was true of France and Kiev, whose political and economic travails merged with a general European crisis. (Kindle loc 512)

Here is how the pulsing of consolidation and disintegration looked in Southeast Asia:


In sum -- in lieu of four modest charter polities in 1240, 23 kingdoms in 1340, and 9 or 10 kingdoms in 1540 -- mainland Southeast Asia by the second quarter of the 19th century contained three unprecedentedly grand territorial assemblages; those of Burma, Siam, and Vietnam. (Kindle loc 799)

Lieberman defines consolidation as a broadening of scope of a polity, including territory, population, war-making capacity, and fiscal reach. And he notes that each of the world polities he studies shows a sequence of consolidation, followed by periods of turmoil and breakdown.


Along with territorial consolidation and administrative centralization, a third index of integration within each empire was a growing uniformity of religious and social practices, languages, and ethnicity. (Kindle loc 873)

And this was true as much in Burma as it was in 17th and 18th century France.

Moreover, and this is his key point, these periods show a remarkable degree of synchrony, from Kiev to Paris to Burma. So here is the central question: what kinds of global triggers or events could have created this synchrony?

Here are a few candidates that he considers. For the 10th-13th century, he considers the effects of global climate fluctuation, disease, Viking invasions, and the predations of Mongol armies from Inner Asia. And for the 17th and 18th centuries he considers the expansion of Eurasian trade, modern arms, and monetary uses of silver in Europe and Asia (Kindle loc 8745). Here is how the climate factor works:


Agriculture also exhibited long-term dynamism, the product of several influences. By increasing the reach and force of monsoon flows and minimizing droughts linked to El Nino events, the Medieval Climate Anomaly c. 800/850-1250/1300 contributed in some uncertain but possibly critical degree to that demographic and agricultural vigor, and associated institutional vitality, characteristic of the charter era, two of whose chief polities, Pagan and Angkor, lay in dry zones. (Kindle loc 1008)

Internal to each polity are factors that appear to be local in their effects: population change, agricultural improvements, new organizational forms in governance, military, and taxation, and the diffusion of literacy and national culture. Concerning the polities of Southeast Asia he writes:

But the logic of these processes does not imply any sort of global synchrony; so, once again, what would serve to link consolidation and disorder in France and Burma? Here is Lieberman's summary assessment.


Why, then, these loose, but increasingly close parallels over a thousand years? On current evidence, the synchronized florescence of Kiev, charter Southeast Asia, and Capetian France owed more to parallel social experiments and especially the Medieval Climate Anomaly than to long-distance trade. Political collapse in the 13th and 14th centuries reflected the intersection of institutional weakness with resource constraints caused by centuries of sustained growth, strains that were aggravated by post-1250/1300 climatic deterioration, shifting trade routes, Tai eruptions in Southeast Asia, and Mongol-Tatar mediations.  The latter could be either military (in Burma, Angkor, and Kiev) or epidemiological (across Europe). Political revival after c. 1450 in all five realms reflected, in part, counterphasic trends: institutional responses to antecedent weaknesses, demographic recovery, and climatic amelioration. But post-1450 reintegration also relied on substantially novel technological and organizational factors, so that each polity started from a higher level than its 10th-century predecessor.  (Kindle loc 9341)

This is world history you can get your teeth into. It is detailed, making use of the best available sources for each of the regions and polities considered. And it is bold in its effort to arrive at trans-continental, even global causes of these local developments.
Posted by Dan Little at 10:49 AM