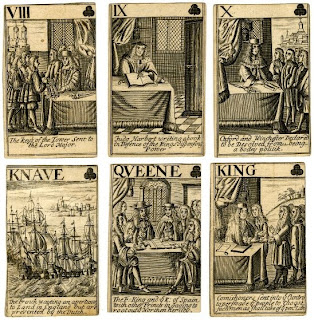 Earlier posts have remarked upon the interesting fact that large historical events are often significantly reconsidered and re-understood through the passage of time.  China's Cultural Revolution is one such example (link), as are the revolutions of 1848 (link).

A truly stunning example of this kind of historical recasting of something that we think we've fully understood is Steve Pincus's 1688: The First Modern Revolution. Pincus sets up his argument beautifully: there has been a dominant and eventually unquestioned narrative about the English Revolution of 1688-89, and in detail and in broad outline -- this narrative is incorrect. Here is the thrust of the standard story: 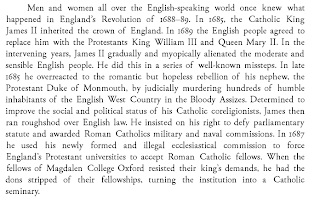 According to this dominant story,


The revolution was unrevolutionary. Unlike other subsequent revolutions, England's revolution was bloodless, consensual, aristocratic, and above all sensible. The English had no desire to transform their polity, their society, or their culture. Instead they worried that James II had intended to do just that. Second, the revolution was Protestant. James II had tried to reinstitute Catholicism in England. The revolution insured that England would remain a Protestant polity. Third, the revolution demonstrated the fundamentally exceptional nature of English national character.... Fourth, there could have been no social grievances undergirding the Revolution of 1688-89 because English society had changed little in the modern world. (kindle loc 134)

According to Pincus, this account fundamentally misrepresents the nature of the transformation that 1688 represented in English history, and it defines the scope of the historical question incorrectly in profoundly misleading ways. Pincus wants to tell a more accurate and revealing story; and he also wants to provide a political historiography that attempts to explain how these misrepresentations have come to define the dominant view of this revolution -- the political ins and outs of Establishment Whigs, Conservatives, and Opposition Whigs in the ensuing century and a half of debate and historical interpretation.

His own approach to the historical problem is to start over: to reassess the materials and archives that exist today that allow the historian to gain fragmentary glimpses into the complex social reality that 1688 represented.  As he points out, there are substantial materials available today that were not available in the eighteenth or nineteenth centuries when the master narrative was pieced together.  But he also observes that even materials available to Macaulay and Trevelyan can be read to a very different conclusion from those drawn by the eighteenth and nineteenth century historians.


The Revolution of 1688-89 is important not because it reaffirmed the exceptional English national character but because it was a landmark moment in the emergence of the modern state. (kindle loc 184)

Just as in the French and Russian Revolutions, there was extensive and violent crowd activity. And just as in other modern revolutions, the revolutionary events resulted not in consensus and compromise but in deep ideological cleavages. (kindle loc 3450)

Third, fourth, and fifth, Pincus refutes the idea that the revolution was "bloodless, aristocratic, and consensual". He documents that mass mobilization and violence were just as striking in England, Scotland, and Ireland as in the first year of the French Revolution (chapter 9), that segments from all levels of society were actively involved in these conflicts (chapter 8), and that the Revolution and its aftermath involved deep and abiding disagreements about the directions that the English state and society should take (chapter 10).  So -- not bloodless, not aristocratic, and not consensual.

Instead Pincus tells a new story:


In this book, then, I retell the story of the Glorious Revolution, but I retell it in significantly new ways.  Instead of a story of triumphant English exceptionalism emphasizing the far-seeing actions of a few men, I tell a story about a wide range of actors reacting not only to developments in English high politics and in the English church but to changes in society, in the economy, and on the broader European scene. (kindle loc 210)

The Revolution of 1688-89, then, like all modern revolutions, was a struggle ultimately waged between two competing groups of modernizers. The revolution did not pit defenders of traditional society against advocates of modernity. Both Whigs and Jacobites were modernizers. It was the Tories who wished to defend a version of the old order. The Tories were placed in the unpalatable position of having to choose between two very imperfect political outcomes. (kindle loc 7542)

So how is it that a great historical event could be so fundamentally mis-construed and mis-remembered? Pincus refers to a number of factors that have distorted the historical understanding of the English Revolution over intervening centuries. One is an English belief in "English exceptionalism." There was a powerful desire on the part of English intellectuals -- for example, Burke and Hume -- to see England as being very different from France -- more civil, more consensual, and more constitutional.  Second is the intellectual framework of "revolution as conflict between a decaying traditional state and a challenging modernist opponent" (see an earlier post on this conception of revolution).  This led historians to narrow the focus of the events they highlighted, and to give primacy in their accounts to the debates and positions of the great figures inside and outside of government.

Third and most important is a feature of English political ideology, as expressed in the political conflicts between Tory and Whig parties and between establishment and opposition Whigs.


Walpole and his political allies now claimed that the revolution had instantiated parliamentary rather than popular sovereignty and that it had established a constitution rather than a blueprint for further reform. (kindle loc 310)

The works of Burke, Macaulay, and Trevelyan reasserted the establishment Whig interpretation of the revolution. ... Their interpretations became hegemonic not because they had uncovered new, irrefutable historical evidence but because in the face of contemporary political events their interpretative opponents had abandoned the field. .... Burke, Macaulay, and Trevelyan did not so much refute the arguments of the Opposition Whigs as assume that in the contemporary political climate their claims were irrelevant. (kindle loc 470)

These passages perhaps represent the key to Pincus's own perspective on the English Revolution -- we might argue that the book contributes to an unfettered "Opposition Whig" account of the revolution. And Pincus seems to support this interpretation: "It is now time to find answers to the questions that the Opposition Whigs raised in the eighteenth century" (kindle loc 503).

So we have the makings of a partial answer to the historiographic question -- why did several generations of historians so badly misunderstand the nature of the English Revolution? Ideology played a role; mental frameworks about "being English" played a role; and concrete political conflicts about what the state should do played a role. And, of course, these sorts of factors are still with us.
Posted by Dan Little at 7:36 AM