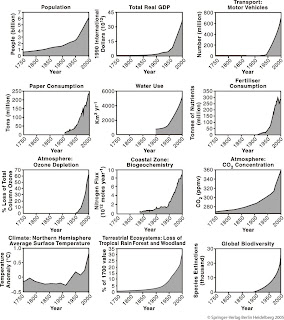 source: J. G. Speth, The Bridge at the End of the World
A recent post on Rawls's critique of capitalism closed with an intriguing mention of a contrast Rawls draws between economic growth and human wellbeing. He is particularly critical of the consumerism that is enmeshed in the social psychology of a growth-oriented market system. This point is worth focusing on more closely.

We seem to work on the basis of a couple of basic assumptions about income, lifestyle, and community in this country that need to be questioned. One group of these clusters around the idea that a high quality of life requires high and rising income. High income is needed for high consumption, and high consumption produces happiness and life satisfaction. Neighborhoods of families with high income are better able to sustain community and civic values. And symmetrically, we assume that it is more or less inevitable that poor communities have low levels of community values and low levels of the experience of life satisfaction.

All these assumptions need to be questioned. As any social service agency can document, there are ample signs of social pathology in the affluent suburbs of American cities. These suburban places aren't paragons of successful, happy human communities in any of the ways Robert Bellah talks about (Habits of the Heart: Individualism and Commitment in American Life

). And there is little reason to believe that the consumption-based lifestyles that define an American ideal of affluence really contribute consistently to life satisfaction and successful community.

But here I want to focus on the other end of this set of assumptions: the idea that non-affluent people and communities are necessarily less happy, less satisfied, and less integrated around a set of civic and spiritual values. So here is the central point: people can build lives within the context of low income that are deeply satisfying and rewarding. And communities of low-income people can be highly successful in achieving a substantial degree of civic and spiritual interconnection and mutual support. It doesn't require "affluence" to have a deeply satisfying human life and a thriving community.

There are many reasons for thinking these observations are likely to be true. One is the example of other societies. Consider village life in Spain or Italy, for example, where many families still live on incomes that are a fraction of American affluence, who incorporate gardens into their regular lifestyle and household economy, and who enjoy admirable levels of personal and social satisfaction. Or think of stable farming communities in India or Africa that have successfully achieved a balance of farm productivity, a degree of social equality, and a strong sense of community. Or consider examples of communities in the United States that have deliberately put together lives and communities that reject "affluence" as a social and personal ideal.

What everyone needs, at every level of income, is decent access to the components of a happy life: healthcare, nutrition, shelter, education, dignity, and security. These are what an earlier generation of development thinkers called basic needs. And it is self-evident how these fit into the possibility of a decent and satisfying life. But access to these goods isn't equivalent to the American dream of affluence.

So here is a fairly profound question: what steps can be taken to promote the features of personal wellbeing and robust community relations that can make "non-affluence" a sustainable social ideal? And how can we help poor communities to strengthen their ability to nurture these positive values according to their own best instincts?

This line of thought converges closely with the striking arguments made by James Gustave Speth in The Bridge at the Edge of the World: Capitalism, the Environment, and Crossing from Crisis to Sustainability. The graphs at the top represent Speth's summary of the environmental catastrophe associated with the idea of permanent economic growth. Much of Speth's critique of consumerism and growth is summarized in this account of a talk he gave at McGill in 2008. Speth argues that a radical rethinking of well-being is necessary if we are to achieve a society that is environmentally sustainable.
Posted by Dan Little at 10:07 PM

One aspect of affluence that positively contributes to environmental sustainability is the associated demographic change. Can we reconcile a standard of living plateau with human population stability?

Terrific piece. I think Jeffrey Sachs' op-ed on Project Syndicate (http://www.project-syndicate.org/commentary/sachs181/English)dovetails with your piece to create a compelling argument that national unhappiness is a national problem and it makes economic sense to make it a national priority. Thanks for posting.

Rebekah, Thanks for your note on this. You are right -- Sachs's piece is highly complementary to this line of thought.

You had me going for a while, until I got to the bit about the "stable farming communities in India" with various admirable qualities. Ummm, so just where are these places? Having had a little bit of personal experience of Indian village life I am sorry to report that you will, on the whole, also find more envy, long-nursed resentment, hatred, greed and fierce, sometimes lethal competition over scarce resources than in any American suburb. As you note, poverty is no basis for an optimal "non-affluent" state of well-being.

Perhaps you could make progress by trying to pin down what specifically a good non-affluent life would amount to in the present-day U.S. E.g. how many square feet of living space? Air-conditioning? Health care services? (MRI scan, yes?) Ditto for education, books and multiple channels of access to culture? I fear one may land up in a spot not too distant from the very same average "middle-middle" class suburban existence that one was trying to exit.

While I am sympathetic to your skepticism of the idyllic village life, your comment on what a good non-affluent life requires shows that you are trapped in a materialistic/consumerist worldview. For example, Dan mentions gardens. There are many ways in which gardening can be a source of personal satisfaction that are completely separate from income or affluence. The feeling of achieving something for yourself, of helping things to grow, of making mistakes and then correcting them, of learning how interrelated the physical world is, etc. etc. And the value of a community, which basically means friendships or family, is independent of income above a certain threshold. Whether you make $30k or $80k, you can still have satisfying and fulfilling friendships and family relationships. This is the point Dan is trying to make, not that people should do without air-con.