Health disparities in the US and China 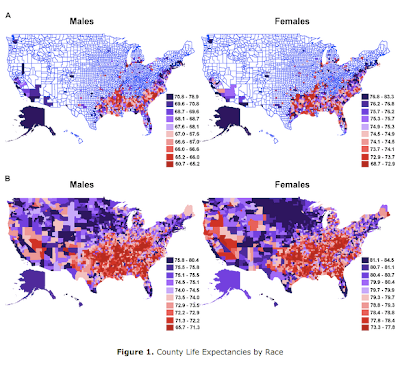 Health disparities across a population are among the most profound indicators of social inequalities that we can find.  And the fact of significant disparities across groups is a devastating statement about the circumstances of justice under which a society functions.  These disparities translate into shorter lives and lower quality of life for whole groups of people, relative to other groups.

Both the United States and China appear to display significant health disparities across their populations. Here are a couple of studies that draw attention to these facts.

Here is an important new study on the question of health disparities in the United States by public health researchers at Harvard and UCSF.  The study is "Eight Americas: Investigating Mortality Disparities across Races, Counties, and Race-Counties in the United States". And the answer the researchers provide to the question above is that the US possesses very significant health disparities across segments of its population. The study is worth reading in detail.

The authors analyze mortality statistics by county, and they break the data down by incorporating racial and demographic characteristics. The data groups fairly well around the eight Americas mentioned in the title: 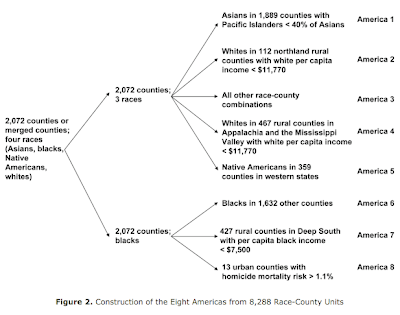 Here is how they describe their findings:


The gap between the highest and lowest life expectancies for race-county combinations in the United States is over 35 y. We divided the race-county combinations of the US population into eight distinct groups, referred to as the “eight Americas,” to explore the causes of the disparities that can inform specific public health intervention policies and programs.

And here is their conclusion:


Disparities in mortality across the eight Americas, each consisting of millions or tens of millions of Americans, are enormous by all international standards. The observed disparities in life expectancy cannot be explained by race, income, or basic health-care access and utilization alone. Because policies aimed at reducing fundamental socioeconomic inequalities are currently practically absent in the US, health disparities will have to be at least partly addressed through public health strategies that reduce risk factors for chronic diseases and injuries.

For example, their data show that "the life expectancy gap between the 3.4 million high-risk urban black males and the 5.6 million Asian females was 20.7 y in 2001." This is an enormous difference in longevity for the two groups; and it is a difference that tags fundamental social structures that influence health and risk across these two populations.

Here is a time-series graph of the behavior of longevity for the eight Americas: 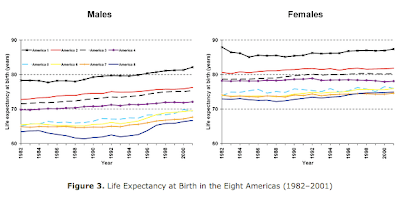 So what are the factors that appear to create these extreme differences in mortality across socioeconomic and racial groups in America? They consider health care access and utilization; homicide; accidents; and HIV as primary potential causes of variations in mortality for a group. Most important of all of these factors for the large populations appear to be the health disparities that derive from access and utilization.  And here they offer an important set of recommendations:


Opportunities and interventions to reduce health inequalities include (1) reducing socioeconomic inequalities, which are the distal causes of health inequalities, (2) increasing financial access to health care by decreasing the number of Americans without health plan coverage, (3) removing physical, behavioral, and cultural barriers to health care, (4) reducing disparities in the quality of care, (5) designing public health strategies and interventions to reduce health risks at the level of communities (e.g., changes in urban/neighborhood design to facilitate physical activity and reduce obesity), and (6) designing public health strategies to reduce health risks that target individuals or population subgroups that are not necessarily in the same community (e.g., tobacco taxation or pharmacological interventions for blood pressure and cholesterol).

These findings are squarely relevant to assessing the justice of our society. The country needs to recognize the severity of the "health/mortality equity" issue, and we need to make appropriate policy reforms so that these disparities begin to lessen.

Several research papers address these issues for the case of China.  One is a World Bank working paper by David Dollar called "Poverty, Inequality, and Social Disparities During China's Economic Reform" (link).  Dollar notes that China has dramatically reduced its poverty rate over the past 25 years, whereas its income inequality measures have increased sharply during the same period. (Albert Park and Sangui Wang review the poverty statistics for this period in China Economic Review; link.)  They conclude that these inequalities between rural and urban populations, and between well educated urban professionals and the urban working class, have also resulted in significant inequalities in health status and outcomes for the various sub-populations.


Disparities in income and wealth between the urban and rural areas, between the eastern and western regions, and between households have widened substantially. In 1990, the richest province had a GDP per person more than seven times larger than the poorest province, but by 2002, the same ratio had grown to 13 times greater.41The Gini coeﬃcient, a measure of income inequality,42increased for China as a whole from 0·31 in 1978–79 to 0·45 in 2004. The level of income inequality in China is now similar to that in the USA, roughly comparable to that in the most inequitable Asian countries—Philippines and Thailand—and approaching the notoriously inequitable levels in Brazil and Mexico. (29-30)


Health equity cannot be concerned only with health in isolation. Rather it must come to grips with the larger issue of fairness and justice in social arrangements, including economic allocations, paying attention to the role of health in human life and freedom.  Health equity is most certainly not just about the distribution of health, not to mention the even narrower focus on the distribution of health care. Indeed, health equity has an enormously wide reach and relevance.

And inequalities in personal income in different provinces lead to highly different levels of ability to fund public amenities in these provinces, with large effects on public health in poor provinces: 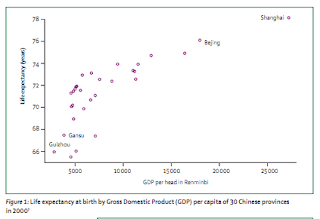 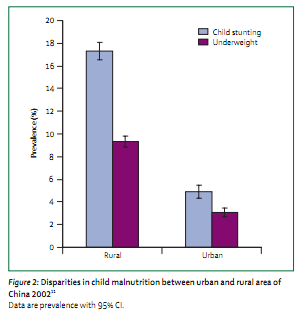 In figure 1 the data demonstrate a strong correlation between life expectancy and average income for China's provinces and municipalities, from just about 65 years for the poorest regions to 78 years in Shanghai region.  Figure 2 demonstrates major inequalities in child health between rural and urban locations.  The authors further report that infant mortality also varies dramatically across regions: "Rural infant mortality rates are nearly five times higher in the poorest rural counties than in the wealthiest countries -- 123 versus 26 per 1000 live births, respectively" (26). One important source of data on these issues that these researchers use is the Chinese National Health Service survey of 1998; link.

The most detailed analysis of health disparities in China I've been able to find is a paper published in 2010 by Feinian Chen, Yang Yang, and Guangya Liu, "Social Change and Socioeconomic Disparities in Health over the Life Course in China: A Cohort Analysis" (link).  They make use of the China Health and Nutrition Survey to allow for a longitudinal study of health in several segments of China's population. (Here is a description of the CHNS.) Their conclusion:

It would appear that studies of health status in China disaggregated by population segments are not yet as fully developed as one would wish.  The CHNS appears to have limited data coverage (much more limited than the national census, for example), and none of the studies mentioned in these articles appear to disaggregate down to levels lower than the province.  But the summary findings of all three of these articles point in the same direction: it is probable that there are significant inter-regional and inter-sectoral inequalities in health outcomes for the sub-populations corresponding to these segments.
Posted by Dan Little at 5:20 PM

For me a big difference in US and China health especially in rural areas. China's most medicine contains harmful chemicals while US medicines were carefully study to ensure the safety of the patients.