I've argued in earlier posts for several ideas:
Are these claims consistent with each other?  An earlier post argues for the consistency of (1) and (2).  Here I will address the relation between (1) and (3): what kinds of causal mechanisms are available to mediate the causal powers of meso-level structures? Are there meso-level mechanisms as well as meso-level causes?  Or are the mechanisms that mediate meso causal powers themselves necessarily located at the micro level?

It is evident that there are micro-level mechanisms for meso-level causal powers. The mechanisms of a run on the bank or a self-fulfilling prophecy are both micro-level; they show how a meso-level event disaggregates onto the beliefs and actions of the individuals involved, leading to collective behavior that results in the meso-level effect. These are This is exactly the kinds of mechanism that analytical sociologists, including Thomas Schelling, want to be the exclusive kind of causation in the social realm. So the hard question is this: Are there meso-level causal mechanisms?

I addressed one aspect of this question in an earlier post, where I considered whether causal mechanisms can be complex and multi-staged.  There I focused on the idea that most theories of causal mechanisms require that there be a reasonably strong regularity between input and output.  This implies that a multi-step causal process will probably not qualify as a mechanism, because the intervening causal steps will imply a low association between initial condition and output condition.  (See the post for more details.)  And this in turn implies that a social mechanism needs to consist of one step: the instigating condition occurs and then the output condition occurs. The diagram illustrates the point. Scenario I represents a single-step causal mechanism; scenario II represents a three-step causal process composed of three component mechanisms.  Scenario II does not qualify as a mechanism itself, because the compound probability of D given A is only 50%. 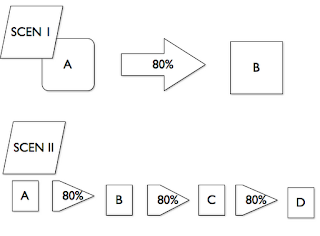 So this would seem to answer the question for the case in which the putative meso-level causal mechanism involves multiple steps of causation. For example: {[Distracting work environment] => [low productivity] => [low profits] => [downsizing]} is a multiple-step causal process entirely at the meso level; but it doesn't establish a meso-level mechanism {[Distracting work environment] => [downsizing]} because the intervening steps imply new contingencies and a subsequent low conditional probability between antecedent and consequent.

It would appear that there are.  Social isolation (referred to in an earlier post) is a meso-level characteristic of a population.  And Alford Young argues that decreasing social isolation causes rising inter-group hostility, another meso-level characteristic of a population.  This seems like a clear and uncontroversial example of a meso-meso causal link that is also a meso-level causal mechanism. It looks like Scenario I above.  Moreover, this mechanism can be employed in explanations of more complex social events like race rebellions.  It would seem that there are similar examples in the work of Robert Sampson on neighborhood effects (link). 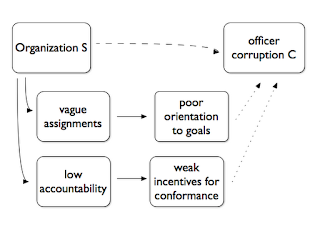 The dashed line indicates the causal power. The solid arc lines on the left indicate "composition". The solid arrows indicate meso-meso causal mechanisms.  And the dotted lines indicate the aggregate consequences of "poor orientation to goals" and "weak incentives for conformance", which is an elevated level of officer corruption. So the meso-level power depends on sub-meso level mechanisms and actor-level mechanisms.

A society / brain metaphor for what it's worth. An animal responds to its environment by action that is the result of the activation of a neural network (Vygotsky's lower mental functions). However, higher mental functions (HMF)(Vygotsky's name for ideas or other shared social functions) are mental actions that work on and change the mind itself (the neural network). Individual actors can also be analyzed as a network, and HMFs because they are also shared social functions (processes, ideas) can also change the network response. So HMF can be analyzed as a meso level cause (in a meso level network) Sort of a distributed cognition facilitated by HMF (and understood through semeiotic or even memetic analysis) Just thinking of analytic possibilities, not a well thought out social theory.