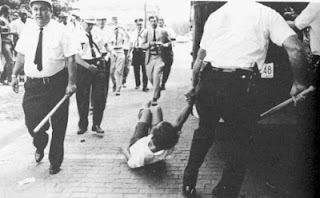 One of the most important and hard-fought dimensions of the Civil Rights struggles of the 1950s and 1960s was the issue of voting rights. The Jim Crow South had made democratic participation almost impossible for black citizens throughout the first half of the century in spite of the fourteenth and fifteenth amendments to the Constitution, ratified in 1868 and 1870. Intimidation and discriminatory voter registration requirements made it all but impossible for African Americans to exercise the right to vote.

Here is a summary of methods of disenfranchisement used during the Jim Crow period up through 1965 (link), provided on the excellent website maintained by Elizabeth Anderson and Jeffrey Jones at the University of Michigan. Here is a good description of the use of "literacy tests" in Mississippi in 1965, provided by the website for Civil Rights Movement Veterans. And here is an example of one such literacy test (link).

Bob Moses was a key leader in the NAACP's voter registration efforts in Mississippi in 1960.  Here is one of his own experiences during this campaign:


We planned to make another registration attempt on the 19th of August.... This was the day then that Curtis Dawson and Preacher Knox and I were to go down and try to register. This was the day that Curtis Dawson drove to Steptoe's, picked me up and drove down to Liberty and we were to meet Knox on the courthouse lawn, and instead we were to walk through the town and on the way back were accosted by Billy Jack Caston and some other boys. I was severely beaten. I remember very sharply that I didn't want to go immediately back into McComb because my shirt was very bloody and I figured that if we went back in we would probably be fighting everybody. So instead, we went back out to Steptoe's where we washed down before we came back into McComb. (The Eyes on the Prize Civil Rights Reader: Documents, Speeches, and Firsthand Accounts from the Black Freedom Struggle, 171)

So what would Bob Moses and other black applicants have found when (or if) they were permitted to attempt to register to vote in Mississippi? Here is a copy of the voter registration form that was in use in Mississippi in the 1950s and 1960s. (The copy was provided to students in my class by John Hardy, a participant in the Freedom Rides and the voter registration drives of 1961 and 1962. Thank you, John, for the document and for your eloquent lecture on the period.) 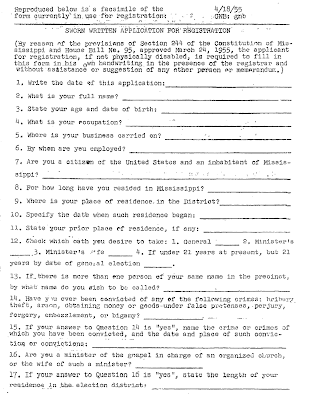 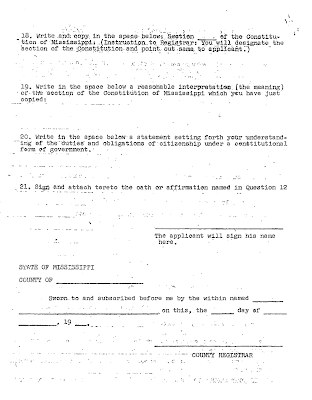 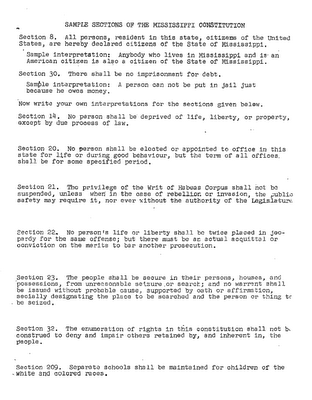 The document is worth reading in its entirety. It makes it plain that the purpose was to intimidate people from exercising their rights of political participation and to provide a basis for excluding them from voter registration if they did make the effort to register.  The form is highly complicated, requiring a series of answers to questions about prior residence and employment.  It then requires the applicant to provide an interpretation of the meaning of an assigned clause in the Mississippi Constitution.  The Registrar had the ability to rule that the explanation applicants provided of the required clause was not a "reasonable interpretation" and therefore disallow their application for registration.  Likewise, the Registrar could disallow the response offered to question 20: "a statement setting forth your understanding of the duties and obligations of citizenship under a constitutional form of government." And, finally, the applicant is forced to endorse clause 209 of the Mississippi Constitution: "Separate schools shall be maintained for children of the white and colored races." This registration form is dated 1955. But the US Supreme Court had already ruled a year earlier in 1954 in Brown v. Board of Education that segregated schooling was unconstitutional.

The Voting Rights Act of 1965 was intended to make these sorts of practices illegal (link).  The Act specifically prohibited the imposition of any "voting qualification or prerequisite to voting, or standard, practice, or procedure ... to deny or abridge the right of any citizen of the United States to vote on account of race or color."

This history of deliberate and violent efforts to prevent African-Americans from voting during the Jim Crow period of American history makes current efforts to tighten voter registration and voting highly suspect to many in the African-American community today.  Voter suppression efforts in a number of states look like a highly reactionary step backwards into a dark period in our history, when powerful individuals, groups, and government agencies vigorously attempted to prevent the black population from exercising their democratic rights. (Here is an ACLU report on voter suppression efforts this year.) It is good to know that several of those efforts have been put on hold by Federal courts, but the effort itself is insidious and shameful, given our history around this issue.

Here are Bob Moses and E.W. Steptoe talking about their registration efforts in Mississippi.

While I do understand that the form was manipulated to prevent certain citizens to vote, I find the concepts of the form, that one ought to show a certain understanding of one's citizenship rather positive.

Perhaps the concept is too idealistic to work in any real, nitty-gritty reality, but it would be nice to encourage (if one cannot mandate) that all citizens who wish to vote must give a a reasonable explanation of why they support or don't support each policy, law, or candidate (anything which may be voted in by popular vote).

Maybe in this day of computers and the anonymity of the internet, such a thing may be done and reviewed without any consideration to race, wealth, or general social class.

(if anything, having such a part as an optional element of a voter ballad would be incredibly interesting from a simple polling/political science standpoint.)

There are any number of problems with what you're describing, but you will definitely never find this expertise you're looking for to be uncorrelated to race, wealth, or general social class. The likelihood of voting in the current system is already correlated to those things.

You're misunderstanding the purpose of representative democracy, it is supposed to force politicians to be responsive to the public. Not force the public to be educated about politics.

Another interesting but unrelated aspect of this is the effective establishment of Christianity by asking about a "minister of the gospels" (which excludes rabbis, imams, etc), in direct violation of the First Amendment.

I never spoke of a prerequisite expertise, nor even that a vote could be invalidated if someone (arbitrarily) determined an opinion was invalid. I simply suggested that I think it would be positive in a broad sense for each American to know about the federal and state laws under which he or she is bound, especially those about which they directly effect through voting.

I find this especially true in a representational democracy, which I believe you characterize very poorly. The prerequisite of any democratic government is the idea that the people are capable of governing themselves freely and with liberal mindedness; democratic citizens do not so much have a right to vote as a duty to vote well--to vote in accordance with what they believe will create a free, good and excellent society.

I will agree with you when you say that each citizen does not need to be informed about each issue; that is, of course, why we elect representatives to vote among themselves about what is best generally. However, it *is* each citizens duty to be informed about each issue in which his or her popular vote directly effects government--such as elections for president, senate, congress and even state propositions. And in these such matters, I find that an accounting of why a vote was cast a particular way an interestingly positive idea--as a way, perhaps, to help citizens take their duty to vote more seriously. There is a certain flippancy in the current American mindset about their civic duty which cannot bode well for a democratic society.

I disagree a strongly as I'm able about your last point--that the purpose of a democracy is to force politicians to be responsive to the public, not force the public to be educated about politics. That is a precise definition of tyranny. A representational democracy can only be deterred from tyranny when they indeed are educated and partake in matters of the state/federal government. We should at all times encourage an informed and serious vote, and discourage an indifferent and uninformed vote.

(as an aside, because I don't wish that last phrase of mine to be misconstrued, an informed vote is simply a vote which is thought through--an opinion which a citizen has formulated thoughtfully given the facts available to him--and in good conscious. I believe that a good and thoughtful vote begins not at the polls but at our schools, where we ought to teach each of our citizens the means through which they might become liberal minded, and therefore fit to rule themselves. To even further clarify (and this perhaps may frustrate some), I believe that each citizen should feel the weight of their civic duty to educate themselves liberally and to vote accordingly.)