Historians of Past & Present 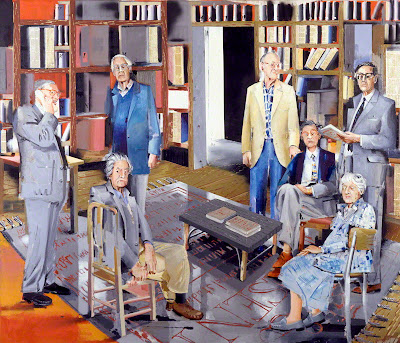 image: "Historians of Past and Present," National Portrait Gallery, London 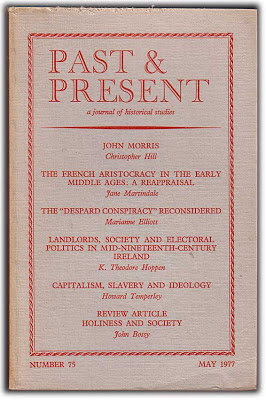 A recent article on J. H. Elliott in the New York Review of Books includes a very striking portrait of the founders of the British history journal, Past and Present. The painting includes Eric Hobsbawm, Rodney Hilton, Lawrence Stone, and Keith Thomas (standing); and Christopher Hill, J. H. Elliott, and Joan Thirst (seated). The journal has been an incredibly important platform for some of the best social history being written from its founding in 1952 through the present, and it is very striking to see these pathbreaking historians all depicted together.

The journal was founded post-war by a group of historians who were Marxist and often members of the British Communist Party; but the journal itself maintained an intellectual independence from doctrine and party that allowed it to cultivate genuinely important historical research. As Hill, Hilton, and Hobsbawm put the point in the 1983 essay mentioned below, "In our dealings with Party or Group we were quite explicit in establishing that the journal was independent, and would accept no policy instructions" (5).


There is one element of this piece of intellectual history that I continue to find particularly intriguing. This has to do with the relationship between intellectual honesty and political conviction.  How is an historian's work (or the work of a social scientist or philosopher) affected by his or her political convictions? Intellectual honesty seems like a straightforward thing: we want scholars to pursue their findings as the facts and inferences guide them. We want them to help us understand how the world works, based on their best reading of the evidence. We don't want them to "spin" events or processes into alignment with their political ideologies or commitments. So how did this work for the historians of Past and Present and for Communist historians who were not part of the journal like E. P. Thompson?

One part of the answer seems clear: these historians chose their topics for research based on their intuitions about the drivers of history, and these intuitions were certainly bound up in their political commitments and passions. So when Hobsbawm focuses on "Machine Breakers" (1952) or Soboul on "Robespierre and the Popular Movement of 1793-4" (1954) or Rodney Hilton on "Freedom and Villeinage in England" (1965) or E. P. Thompson on "The Moral Economy of the English Crowd" (1971), the topics they study have an obvious relevance to their political passions. But what about their findings? Are they able to see the aspects of their stories that are unexpected from a classical Marxist point of view? Is history "gnarly" and unpredictable for them? And are they honest in laying out the facts as they found them? Having read each of Hobsbawm, Soboul, Hilton, and Thompson with a certain degree of care over the years, my belief is that they meet this test. Certainly this is true for Thompson; the originality of his classic book, The Making of the English Working Class, is precisely to be found in the fact that it is not a cookie-cutter theory of class. Instead, Thompson goes into great detail, based on a rich variety of primary sources, about the sources of identity that working people in the eighteenth and nineteenth centuries created for themselves. These historians are not doctrinaire in their findings, and they honestly confront the historical realities that they find.

One way of getting a feeling for the journal is to look at its contents. The topics included in the first ten years of publication of Past and Present cover a broad range of historical subjects. Here are some exemplars from the first decade:
Out of this list a number of themes recur: for example, underclass life, revolution, class, and economic history. These topics reflect the theoretical and political interests of the founders and the editors of the journal, and they served to encourage a substantial volume of additional research along these lines in the years that followed. Many of these essays have proven to be a classics in their genres.

Two interesting articles were published in the journal in 1983 about its own history (link). The first was by three of the founding editors of the journal, Christopher Hill, Rodney Hilton, and Eric Hobsbawm. And the other was by Jacques Le Goff, the then-editor of the equally important French history journal, Annales.  These two essays offer very interesting snapshots into the role that the journal played in British history through the mid 1980s.

Hill, Hilton, and Hobsbawm emphasize the intellectual independence of the journal from its inception. This independence derived from the commitment of the board of editors: "It has been the collegiality of the Board which enabled us to know each other, to formulate a consensus about the sort of history we wanted to encourage -- irrespective of ideological or other divergences within the Board -- to establish policies and perspectives for the journal, however tacitly and empirically, and to establish a flexible continuity of policy" (12).

Jacques Le Goff also addresses the Marxist orientation of the journal in his 1983 contribution in these terms:


Never having had any prejudice against Marxism, provided it was open and undogmatic, I was totally able to accept a publication in which there was certainly an element of Marxism but which gave no impression of being subject to a dogma, still less to a party. (14)

Past and Present has been a leading forum for a particularly dynamic field of historiography in its six decades of publication. Its pages have highlighted the importance of social and economic history; the concrete history of social classes; the dynamics of revolution; the role that technology played in ordinary life in medieval and modern times; the key roles that agriculture and rural life played in early modern history; and underclass social life. These are themes that have a great deal of salience for a Marxist interpretation of history.  But what is displayed in its pages, from beginning to the present, is rigorous, critical history -- not Marxist dogmas about the working class, the peasantry, or the inevitability of social revolution.

(Here is a rational discussion of Hobsbawm's political affiliations in the Guardian; link. And here is a diatribe against Hobsbawm's insufficient commitment to Marxism in the International Marxist Tendency; link. This lengthy piece presents an alternative interpretation of Hobsbawm's life and work. Harvey Kaye provides extensive discussion of these figures in The British Marxist Historians. Also interesting is Michael Scott Christofferson's French Intellectuals Against the Left: The Anti-totalitarian Moment of the 1970s.)
Posted by Dan Little at 4:32 PM

Surely it's a framing issue. The topic is the frame and the innovation, the rest of the work fits the standards of 'professional history' - necessary for acceptance by the broader academic community.

What's interesting is that for such a modest innovation to occur, it seems a strong, organizing conviction is necessary.

It is a remarkable portrait, isn't it? If E.P. Thompson was included in it too, it would be hanging on my wall.

Despite being a historian, I sometimes forget just how much influence this group had on the development of the discipline in the last fifty years or so. However, the field has changed. Unsurprisingly, the explicitly Marxist aspects of their approach are rather less influential now than they once were. Less obviously, it seems that another part of their approach has also have fallen out of favour, namely sociology/anthropology inflicted historical analysis. Whereas it was quite important in the 50s-70s, historians now appear to draw much more on literary theory and perhaps economics than on the traditional social sciences.

That said, there are exceptions. As you are probably aware, James C Scott has had quite an impact on social history, especially early modern social history. See for example, Paul Griffiths, Adam Fox and Steve Hindle (eds), The Experience of Authority in Early Modern England (1996), especially the introduction. There's also Steve Pincus' new book on 1688 which explicitly draws on political science.