The status of women in India 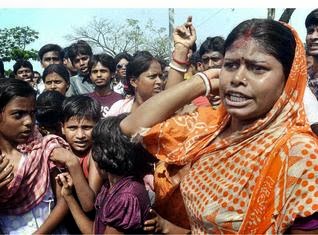 Sociologists are often interested in making sense of processes of change that radiate along the axes of the great tectonics of social life, including class, race, and gender. These features of social life are particularly fundamental because they denote powerful determinants of opportunity, life-course, and personal outcomes for all of us. The positions into which individuals are born within the property system have great influence on the ways their lives unfold. The social filigree of race and ethnicity, and the ways in which these categories are socially constructed and projected, likewise creates determinative pathways of development and action for individuals in many social settings. And the social freight of gender and family creates opportunities and obstacles, expectations and stereotypes, for boys and girls, women and men. There are other large dimensions of social embeddedness that might be brought forward as well -- religion, culture, normative communities, power and authority, for example. But class, race, and gender are especially profound. And each has given rise to movements of emancipation in reaction to the oppressions that they represent for specific groups in society.

Kenneth Bo Nielsen and Anne Waldrop have assembled an excellent volume on the status of women in contemporary India in their recent book Women, Gender, and Everyday Social Transformation in India. The collection brings together contributors who approach the topic using the tools of ethnographic research to better understand the everyday realities of experience of women in India today. The volume focuses on three large areas of life in contemporary India -- technology and work, political institutions, and feminist activism. There is a valuable effort to attempt to understand the current upsurge of public violence and rape against women in terms of the social changes that are occurring in these areas.

The editors introduce the focus of the volume in these words:

The pace of socioeconomic transformation in India over the past two and a half decades has been formidable. In this volume we are concerned with examining how these transformations have played out at the level of everyday life to influence the lives of Indian women, and gender relations more broadly."

Readers of Understanding Society will find the volume especially interesting because it approaches the realities of gender, class, and caste in a micro- and meso-level way, looking at specific individuals and groups of women within the concrete social relations within which they find themselves. A rich understanding of the socially constituted realities of "agency" and "structure" plays an important role in the approaches these investigators bring to their research.

People can never act outside of the multiplicity of social relations in which they are enmeshed; ... the exercise of individual agency aiming for change is thus always conditioned, and human agency is both enabled and limited by those social structures within which change is sought. (7)

Kenneth Nielsen's contribution on the Singur movement in West Bengal against the proposed Tata factory favored by the ruling CP/M government of the state is very interesting. He illustrates how the status rise of a caste group (Chasi Kaibartta in transition to Mahishya) also reflected a fairly deliberate effort to redefine and control the role of women. "Notably, the Mahishya caste movement for higher status entailed an appropriation of upper-caste norms and values including the Hindu elite male concern for harnessing female sexuality" (207). This account suggests a Bourdieu-like struggle within a "field", making strategic adjustments so as to gain advantage over time. Intra- and inter-caste struggles played out into a redefinition of the nature and role of women in village society. Nielsen's central interest is the micro-processes through which women in these villages made the transition from their traditional roles to the role of part-time activist. This is a familiar question from social movements research. (Here is a causal diagram representing the recruitment process taken from Doug McAdam, "Beyond Structural Analysis" (link).) 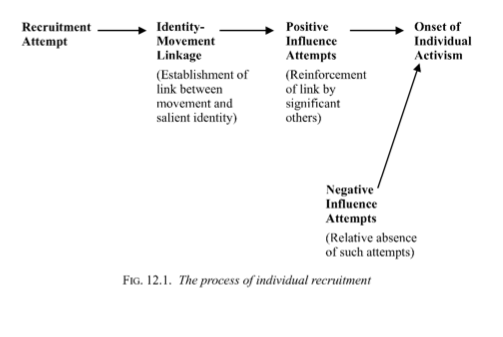 But Nielsen's treatment is not theoretical; it is ethnographic, attempting to discover through interviews and participant-observation the concrete steps that occurred from household to street demonstration for some of these women.

Another interesting observation Nielsen offers concerns the question of “issue escalation”. It is often observed in the study of contentious politics that a movement around a specific issue often broadens its focus to include a more comprehensive set of issues. In this instance the natural progression would be from the specific issue of land confiscation to a broader concern for gender equity in rural society. But this escalation did not occur in the case of the West Bengal/Singur movement.

In contrast [to movements in Karnataka and Maharashtra], the Singur movement did not spawn reflections on the gendered nature of landownership and inheritance, even though inheritance patterns in Singur followed the broader West Bengal pattern where land is fragmented and customarily inherited through the line of male descendants. (215)

And Nielsen seems to have uncovered the root of an explanation for why this escalation did not occur: the involvement of women in the Singur movement was actually quite consistent with the patriarchal values governing women's roles that were current in rural society in West Bengal. "The mobilization of women into the Singur movement was facilitated by the fact that it was successfully embedded in a gendered discourse and imagery in which Shantipara's Mahishya women appeared as defenders of the common good of the family and the village" (215). (Kimberly Springer describes the complicated relationship between feminist activism and the US civil rights movement in Living for the Revolution: Black Feminist Organizations, 1968–1980.)

Turn now to another contribution that also focuses on West Bengal, Sirpa Tenhunen's "Gender, Intersectionality and Smartphones in Rural West Bengal." Tenhunen's question is how this innovative communication technology affected the opportunities and agency of women in this region. (One thing I appreciate about the volume as a whole is the care that the researchers take to make it clear that their findings do not represent "India" as a whole.)


I argue that to understand how mobile phone use is shaped by and reshapes gender, it is necessary to explore how the physical properties of phones determine technical affordances -- that is, the possibilities for action -- according to the users' gender, but also such parameters of identity as class and education. (33)

Tenhunen's ethnography focuses on women's use of the technology -- the conversations they conduct in specific times and places. She had observed this village in 1999 (before the cell network had been built out), and again in 2005, 2007-08, 2010, and 2012-13. So her observations permitted her to have a perspective on the socially constructed ways in which adoption of telephony was carried out. One of her most basic observations is that the adoption of telephony initially followed caste lines (37), with upper castes adopting cell phones earlier than other caste groups. She also finds that cell phone ownership tended to be concentrated among male villagers in the early period, and that diffusion to women was often the consequence of marriage relationships. "Fathers and brothers gave phones to ensure that women could stay in touch after marriage" (37). And she finds that women's calling patterns are different from male users in the village. Here is a table of calling patterns based on call diaries from 2008. 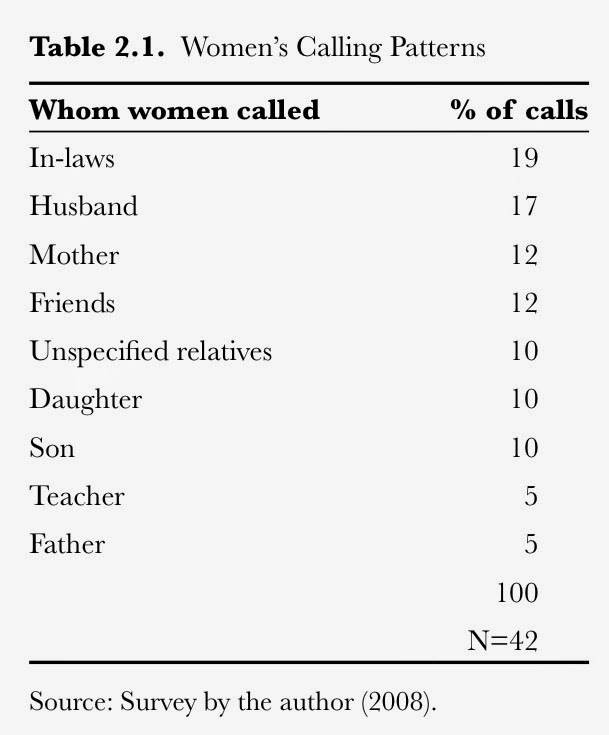 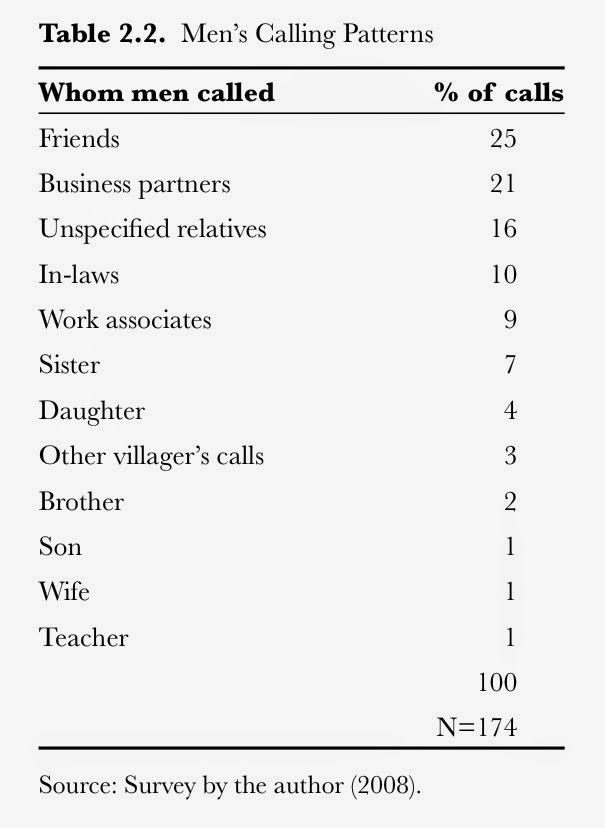 This is interesting material, and could be interpreted as a map of the patriarchal and domestic orbits of women and men in the village. Tenhunen argues that cell phones facilitated a broadening of social contacts that had favorable effects on gender opportunities for women in the village.


In rural India, the introduction of phones offered rural women a new, unobstrusive avenue to extend their contacts and space without moving out of their neighbourhood. Women's increased contact with their natal village and female relatives in other villages forms part of the broader changes evident in the village's gender relationships. The most pronounced of these changes are the increase in education for females, women becoming visible in formal politics, and a few high-caste women taking up white-collar jobs. (41-42)

What is particularly interesting about this research is the strength of the case Tenhunen establishes for the differential adoption and consequences of the new cellular technology. "Technology is gendered" -- this is a slogan in the sociology of technology, but it is a simple and important reality in this study.

These are only two of the fifteen chapters of Women, Gender and Everyday Social Transformation in India (Anthem South Asian Studies). But every chapter is worth reading, and the book represents an important contribution to understanding the dynamics under way in India today for half of its population.

India although a very progressive country, is still backward in some areas, namely the treatment of women. Women are not treated with respect nor given the same privileges as men.
Women are supposed to be homemakers, and even the working women are expected to attend to duties at home, once they return from work. They are responsible for raising a family, and that is the norm.

India although a very progressive country, is still backward in some areas, namely the treatment of women. Women are not treated with respect nor given the same privileges as men. Women are supposed to be homemakers, and even the working women are expected to attend to duties at home, once they return from work. They are responsible for raising a family, and that is the norm.Do check out my blog at: http://www.jodilogik.com/wordpress/index.php/status-of-women-in-india/