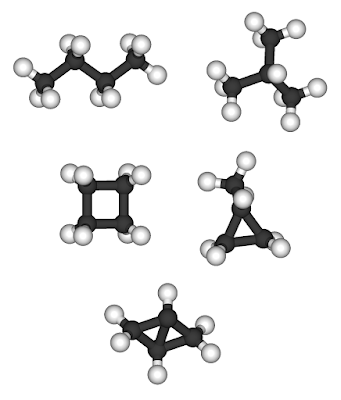 A prior post focused on the question of whether chemistry supervenes upon physics, and I relied heavily on R. F. Hendry's treatment of the way that quantum chemistry attempts to explain the properties of various molecules based on fundamentals of quantum mechanics. This piece raised quite a bit of great discussion, from people who agree with Hendry and those who disagree.

It occurs to me that there is a simpler reason for thinking that chemistry fails to supervene upon the physics of atoms, however, which does not involve the subtleties of quantum mechanics. This is the existence of isomers for various molecules. An isomer is a molecule with the same chemical composition as another but a different geometry and different chemical properties. From the facts about the constituent atoms we cannot infer uniquely what geometry a molecule consisting of these atoms will take. Instead, we need more information external to the physics of the atoms involved; we need an account of the path of interactions that the atoms took in "folding" into one isomer or the other. Therefore chemistry does not supervene upon the quantum-mechanical or physical properties of atoms alone.

It is evident that this is not an argument that chemistry does not supervene upon physics more generally, since the history of interactions through which a given isomer emerges is itself a history of physical interactions. But it does appear to be a rock-solid refutation of the idea that molecules supervene upon the atoms of which they are constituted.

Significantly, this example appears to have direct implications for the relation between social facts and individual actors. If we consider the possibility of "social isomers" -- social structures consisting of exactly similar actors but different histories and different configurations and causal properties in the present -- then we also have a refutation of the idea that social facts supervene upon the actors of which they are constituted. Instead, we would need to incorporate the "path-dependent" series of interactions that led to the formation of one "geometry" of social arrangements rather than another, as well as to the full suite of properties associated with each individual actor. So QED -- social structures do not supervene on the features of the actors. And if some of the events that influence the emergence of one social structure rather than another are stochastic or random -- one social isomer instead of its compositional equivalent -- then at best social structures supervene on individuals conjoined with chance events in a path-dependent process.

There has been much discussion of the question of multiple realizability -- that one higher-level structure may correspond to multiple underlying configurations of components and processes. But so far as I have been able to see, there has been no discussion of the converse possibility -- multiple higher-level structures corresponding to a single underlying configuration. And yet this is precisely what is the case in chemistry for isomers and in the hypothetical but plausible possibility sketched here for "social isomers". This is indeed the key finding of the discovery of path-dependencies in social outcomes.