A survey of agent-based models 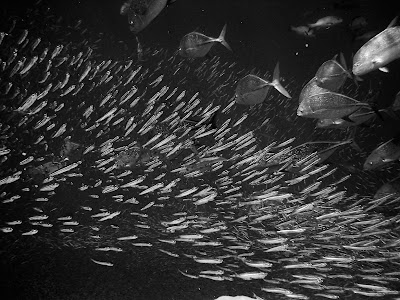 Federico Bianchi and Flaminio Squazzoni have published a very useful survey of the development and uses of agent-based models in the social sciences over the past twenty-five years in WIREs Comput Stat 2015 (link). The article is a very useful reference and discussion for anyone interested in the applicability of ABM within sociology.

Here is their general definition of an ABM:


Agent-based models (ABMs) are computer simulations of social interaction between heterogeneous agents (e.g., individuals, firms, or states), embedded in social structures (e.g., social networks, spatial neighborhoods, or institutional scaffolds). These are built to observe and analyze the emergence of aggregate outcomes. By manipulating behavioral or interaction model parameters, whether guided by empirical evidence or theory, micro-generative mechanisms can be explored that can account for macro-scale system behavior, that is, an existing time series of aggregate data or certain stylized facts. (284)

This definition highlights several important features of the ABM approach:
Bianchi and Squazzoni note that the primary areas of application of agent-based models in social-science research include a relatively limited range of topics. The first of these topics included uncoordinated cooperation, reciprocity, and altruism. Robert Axelrod's work on repeated prisoners' dilemmas represents a key example of modeling efforts in this area (link).

A peculiar form of altruism is punishment: imposition of a cost on non-cooperators by other actors. Without punishment the exploitation strategy generally extinguishes the cooperation strategy in a range of situations. A "reciprocator" is an actor who is open to cooperation but who punishes previous non-cooperators on the next interaction. Bianchi and Squazzoni spend time describing an ABM developed by Bowles and Gintis (link) to evaluate the three strategies of Selfish, Reciprocator, and Cooperator, and a derived Shirking rate in a hypothetical and heterogeneous population of hunter-gatherers. Here is Bowles and Gintis' hypothesis:


The hypothesis we explore is that cooperation is maintained because many humans have a predisposition to punish those who violate group-beneficial norms, even when this reduces their fitness relative to other group members. Compelling evidence for the existence and importance of such altruistic punishment comes from controlled laboratory experiments, particularly the study of public goods, common pool resource, ultimatum, and other games.

And here is their central finding, according to Bianchi and Squazzoni:

They found that the robustness of cooperation depended on the coexistence of these behaviors at a group level and that strong reciprocators were functional in keeping the level of cheating under control in each group (see the shirking rate as a measure of resources lost by the group due to cheating in Figure 1). This was due to the fact that the higher the number of cooperators in a group without reciprocators, the higher the chance that the group disbanded due to high payoffs for shirking. (288)

Here is the graph of the incidence of the three strategies over the first 3000 periods of the simulation published in the Bowles and Gintis article: 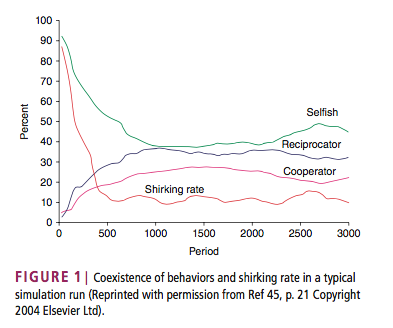 This graph represents the relative frequency of the three types of hunter-gatherers in the population, along with a calculated shirking rate for each period. The Selfish profile remains the most frequent (between 40% and 50%, but Reciprocators and Cooperators reach relatively stable levels of frequency as well (between 30% and 40%, and between 20% and 30%). As Bowles and Gintis argue, it is the robust presence of Reciprocators that keeps the Selfish group in check; the willingness of Reciprocators to punish Selfish actors keeps the latter group from rising to full domination.

It is tempting to read the study as representing a population that reaches a rough equilibrium. However, it is possible that the appearance of equilibrium conveyed by the graph above is deceptive. Other areas of complex phenomena raise the possibility that this is not a longterm equilibrium, but rather that some future combination of percentages of the three strategies may set off a chaotic redistribution of success rates. This is the key characteristic of a chaotic system: small fluctuations in parameters can lead to major deviations in outcomes.

Also interesting in Bianchi and Squazzoni's review is their treatment of efforts to use ABMs to model the diffusion of cultural and normative attitudes (293ff.). Attitudes are treated as local "contagion" factors, and the goal of the simulation is to model how different adjacencies influence the pattern of spread of the cultural features.


Agents interacted with neighbors with a probability dependent on the number of identical cultural features they shared. A mechanism of interpersonal influence was added to align one randomly selected dissimilar cultural feature of an agent to that of the partner, after interaction. (294ff.)

Social network characteristics have been incorporated into ABMs in this area.

Bianchi and Squazzoni also consider ABMs in the topic areas of collective behavior and social inequality. They draw a number of useful conclusions about the potential role that ABMs can play in sociology, including especially the importance of considering heterogeneous agents:

At a substantive level, these examples show that exploring the fundamental heterogeneity of individual behavior is of paramount importance to understand the emergence of social patterns. Cross-fertilization between experimental and computational research is a useful process. It shows us that by conflating the concept of rationality with that of self-interest, as in standard game theory and economics, we cannot account for the subtle social nuances that characterize individual behavior in social contexts. (298)

And they believe -- perhaps unexpectedly -- that the experience of building ABMs in a range of sociological contexts underlines the importance of institutions, norms, and social context:

Moreover, these ABM studies can help us to understand the importance of social contexts even when looking at individual behavior in a more micro-oriented perspective. The role of social influence and the fact that we are embedded in complex social networks have implications for the type of information we access and the types of behavior we are exposed to. (301)

This is a useful contribution for sociologists, as a foundation for a third alternative between statistical studies of sociological phenomena and high-level deductive theories of those phenomena. ABMs have the potential of allowing us to derive large social patterns from well chosen and empirically validated behavioral assumptions about actors.

I mentioned the common finding in complexity studies that even fairly simple systems possess the capacity for sudden instability. Here is a simulation of a three-body gravitational system which illustrates periods of relative stability and then abrupt destabilization.

ABMs permit us to model populations of interactive adaptive agents, and often the simulation produces important and representative patterns at the aggregate level. Here is an interesting predator-prey simulation on YouTube using an ABM approach by SSmithy87:

The author makes a key point at 2:15: the pattern of variation of predator and prey presented in the simulation is a well-known characteristic of predator-prey populations. (Red is predator and blue is prey.) 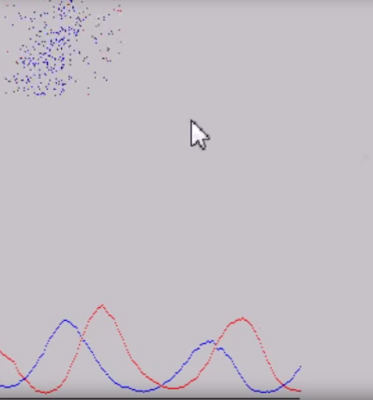 But the equations representing this relationship were not built into the model; instead, this characteristic pattern is generated by the model based on the simple behavioral assumptions made about prey and predators. This is a vivid demonstration of the novelty and importance of ABM simulations.