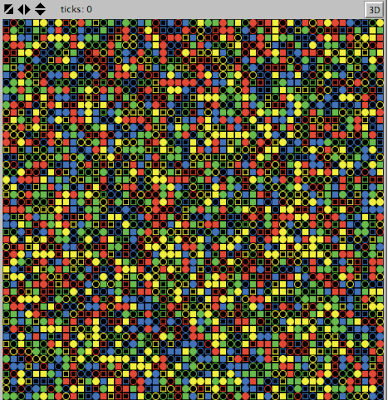 One defect of the ABMs considered in the prior post about the emergence of civil conflict is that they do not incorporate the workings of organizations into the dynamics of mobilization. And yet scholars like Tilly (Dynamics of Contention) and Bianco (Peasants without the Party: Grassroots Movements in Twentieth Century China) make it clear that organizations are critical to the development and scope of mobilization of a populace. So a model of civil conflict needs to be able to incorporate the effects of organizations in the mobilization and activation of large groups of individual agents. Here I will explore what we might want from an ABM that incorporates organizations.

Ideally I would like to see a model that incorporates:

How might organizations be introduced into an agent-based model of social contention? I can imagine two quite different approaches. (A) We might look at organizations as higher-level agents within the process. As each organization works its way through the population it gains or loses members; and this affects individual behavior and the geographical distribution of activated agents. This would be an attempt to directly model the mechanism of mobilization through organizational mobilization. (B) Another possible and simpler approach is to represent organizations as environmental factors, analogous to disease vectors, which percolate through the population of first-order agents and alter their behavior. Let's consider both.

(A) Organizations as meso-level agents. The first approach requires that we provide rules of behavior for both kinds of agents, and recognize that the two processes (organizational recruitment and individual action) may influence each other iteratively. Organizations compete for members and strive to create collective action in support of their agendas. Membership in an organization influences the individual actor by increasing activation. And increasing membership influences the functioning of the organization.

If we want to model organizations as agents, then we need to specify their properties and action rules as well. We might begin by specifying that organizations have properties that affect their actions and their ability to recruit:

For a simulation of inter-group conflict, we would like to include two ethnic groups, and one or more organizations competing within each group.

Mobilization occurs at the individual level: actors receive invitations to membership sequentially, and they respond according to the net effect of their current characteristics. Once an actor has affiliated, he/she remains susceptible to appeals from other organizations, but the susceptibility is reduced.

Membership in an organization affects an individual's level of engagement in a set of grievance issues and his/her propensity for action. Individuals may express their organizational status at a range of levels of activism:
The model calculates each agent's behavior as a function of grievance, risk, appeal, location, and organizational influence.

(B) Organizations as infection vectors. A simpler approach is to represent the various organizations as contagious diseases that have differential infection rates depending on agent properties, and differential effects on behavior depending on which "infection" is present in a given agent. Presumably the likelihood of infection is influenced by whether the individual has already been recruited by another organization; this needs to be represented in the rules governing infection. It also implies that there is a fair amount of path dependence in the simulation: the organization that starts first has an advantage over competitors.

It seems it would be possible to incorporate a disease mechanism into the Epstein model to give a role for organizations in the occurrence of civil unrest.

Now imagine running the model forward with two types of processes occurring simultaneously. The organizations recruit members iteratively and the activation status of each individual is calculated on each tick of the model. At each tick every individual has a membership status with respect to the organizations ("infections"), and each has an activation level (low, medium, high). When a concentration of, say, 40% of agents are activated to a high level in a region of a given size, this constitutes an episode of uprising / ethnic violence / civil unrest.

(It should be noted that organizations are a peculiar kind of agent. They have properties that are characteristic of "complex adaptive systems": they are supra-individual, they are influenced by the actors they touch, and they influence the behavior of the actors they touch. So the behavioral properties of an organization perhaps should not be specified exogenously.)

(NetLogo is a sophisticated modeling package that permits researchers to develop small and medium-sized agent-based models, and it provides a number of relevant examples of simulations that are of interest to social scientists (link). Particularly interesting for the current purposes are a simulation of the Epstein model of rebellion discussed earlier (link) and an implementation of an AIDS contagion model that could be considered as a platform for modeling the spread of an organization or a set of ideas as well (link). Here is the link for NetLogo:
Wilensky, U. (1999). NetLogo. http://ccl.northwestern.edu/netlogo/. Center for Connected Learning and Computer-Based Modeling, Northwestern University, Evanston, IL.)
Posted by Dan Little at 6:20 PM

Great post, Daniel! I'm just writing to thank you for all the thought-provoking discussions and suggestions you've been posting on your blog. I became interested in ABMs after reading your website and this particular model of organisational recruitment may be very useful for my research (on prison gangs). Many thanks from an avid reader! :)