How to do cephalopod philosophy 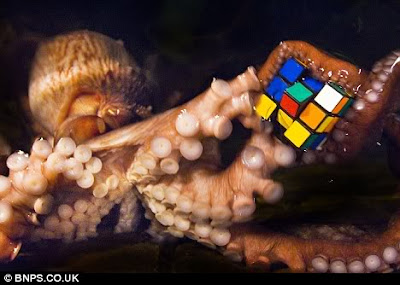 How should researchers attempt to investigate non-human intelligence? The image above raises difficult questions. The octopus is manipulating (tenticlating?) the Rubik's cube. But there are a raft of questions that are difficult to resolve on the basis of simple inductive observation. And some of those questions are as much conceptual as they are empirical. Is the octopus "attempting to solve the cube"? Does it understand the goal of the puzzle? Does it have a mental representation of a problem which it is undertaking to solve? Does it have temporally extended intentionality? How does octopus consciousness compare to human consciousness? (Here is a nice website by several biologists at Reed College on the subject of octopus cognition; link.)

An octopus-consciousness theorist might offer a few hypotheses:
How would any of these hypotheses be evaluated?

One resource that the cephalopod behavior theorist has is the ability to observe octopi in their ordinary life environments and in laboratory conditions. These observations constitute a rich body of data about behavioral capacities and dispositions. For example:

Here we seem to see the organism conveying a tool (coconut shell) to be used for an important purpose later (concealment) (link). This behavior seems to imply several cognitive states: recognition of the physical characteristics of the shell; recognition of the utility those characteristics may have in another setting; and a plan for concealment. The behavior also seems to imply a capacity for learning -- adapting behavior by incorporating knowledge learned at an earlier time.

Another tool available to the cephalopod theorist is controlled experimentation. It is possible to test the perceptual, cognitive, and motor capacities of the organism by designing simple experimental setups inviting various kinds of behavior. The researcher can ask "what-if" questions and frame experiments that serve to answer them -- for example, what if the organism is separated from the shell but it remains in view; will the organism reaquire the shell?

A third tool available to the cephalopod researcher is the accumulated neuro-physiology that is available for the species. How does the perceptual system work? What can we determine about the cognitive system embodied in the organism's central nervous system?

Finally, the researcher might consult with philosophers working on the mind-body problem for human beings, to canvass whether there are useful frameworks in that discipline that might contribute to octopus-mind-body studies. (Thomas Nagel's famous article, "What is it Like to Be a Bat?", comes to mind, in which he walks through the difficulty of imagining the consciousness of a bat whose sensory world depends on echo-location; link.)

In short, it seems that cephalopod cognition is a research field that necessarily combines detailed empirical research with conceptual and theoretical framing; and the latter efforts require as much rigor as the former.

A great post. This makes me think of Stanislaw Lem's "His Master's Voice". Lem's recurring theme of the deep differences that are likely to exist between extraterrestrial intelligences and our own finds its fullest expression in this novel; it's practially a philosophical treatise. Thinking about these issues is a useful corrective to anthropocentrism and ethnocentrism.