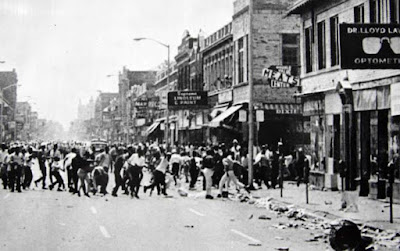 The Kerner Commission released its report in 1968, following months of intensive study of the series of major race riots and rebellions that had occurred in 1967. Here is the executive summary (link), and here is a detailed review of the context and reception of the report in Boston Review (link).

It is enormously important for us today, almost fifty years later, to reread the report with an eye to the diagnosis the commissioners arrived at -- the underlying structural and experiential conditions that had set the stage for 164 riots, rebellions, and disturbances across the country during 1967 -- and the recommendations they made for healing these fundamental contradictions within our American democracy. Newark and Detroit were the most destructive during 1967, but there were many others during that year, and equally destructive uprisings took place in many major American cities in the following year as well. The Commission's "most basic conclusion" is stark, unblinking, and profoundly troubling: "This is our basic conclusion: Our nation is moving toward two societies, one black, one white -- separate and unequal."

The Commission was careful and deliberate in its assessments of causation of individual rebellions, and they identified broad standing conditions as crucial parts of the causal pathway to the eruption of violence:


Disorder did not erupt as a result of a single "triggering" or "precipitating" incident. Instead, it was generated out of an increasingly disturbed social atmosphere, in which typically a series of tension-heightening incidents over a period of weeks or months became linked in the minds of many in the Negro community with a reservoir of underlying grievances. At some point in the mounting tension, a further incident-in itself often routine or trivial-became the breaking point and the tension spilled over into violence.

"Prior" incidents, which increased tensions and ultimately led to violence, were police actions in almost half the cases; police actions were "final" incidents before the outbreak of violence in 12 of the 24 surveyed disorders.

What the rioters appeared to be seeking was fuller participation in the social order and the material benefits enjoyed by the majority of American citizens. Rather than rejecting the American system, they were anxious to obtain a place for themselves in it.

(6)The report considers the nature of the grievances and demands that motivated participants in these uprisings, and classifies them according to urgency:

The Commission report is also explicit about the severity of the gap between black and white citizens with respect to crucial elements of life quality:

Social and economic conditions in the riot cities constituted a clear pattern of severe disadvantage for Negroes compared with whites, whether the Negroes lived in the area where the riot took place or outside it. Negroes had completed fewer years of education and fewer had attended high school. Negroes were twice as likely to be unemployed and three times as likely to be in unskilled and service jobs. Negroes averaged 70 percent of the income earned by whites and were more than twice as likely to be living in poverty. Although housing cost Negroes relatively more, they had worse housing--three times as likely to be overcrowded and substandard. When compared to white suburbs, the relative disadvantage is even more pronounced. (7)

To this list of racial gaps we must now add the health disparities gap, including disparities by race in infant mortality, disease incidence, and longevity.

And consider these troubling observations about hopes and expectations by young African-American men and women that the Commission discovered. These lines were intended to describe conditions in the late 1960s; but they have great relevance for today's environment in many American cities:


Frustrated hopes are the residue of the unfulfilled expectations aroused by the great judicial and legislative victories of the Civil Rights Movement and the dramatic struggle for equal rights in the South.

A climate that tends toward approval and encouragement of violence as a form of protest has been created by white terrorism directed against nonviolent protest; by the open defiance of law and federal authority by state and local officials resisting desegregation; and by some protest groups engaging in civil disobedience who turn their backs on nonviolence, go beyond the constitutionally protected rights of petition and free assembly, and resort to violence to attempt to compel alteration of laws and policies with which they disagree.

The frustrations of powerlessness have led some Negroes to the conviction that there is no effective alternative to violence as a means of achieving redress of grievances, and of "moving the system." These frustrations are reflected in alienation and hostility toward the institutions of law and government and the white society which controls them, and in the reach toward racial consciousness and solidarity reflected in the slogan "Black Power." (9)

The second point is particularly salient today in a political environment in which racial antagonisms have been encouraged by leading presidential candidates, and an encouraging nod has been offered to adherents willing to use violence against peaceful demonstrators at political rallies.

The report's observations about failures of public school systems in segregated cities are particularly relevant to the city of Detroit, and a partial explanation of the growing sense of separation between white and black Michiganders and between Detroit and Lansing:


Education in a democratic society must equip children to develop their potential and to participate fully in American life. For the community at large, the schools have discharged this responsibility well. But for many minorities, and particularly for the children of the ghetto, the schools have failed to provide the educational experience which could overcome the effects of discrimination and deprivation.
This failure is one of the persistent sources of grievance and resentment within the Negro community. The hostility of Negro parents and students toward the school system is generating increasing conflict and causing disruption within many city school districts. But the most dramatic evidence of the relationship between educational practices and civil disorders lies in the high incidence of riot participation by ghetto youth who have not completed high school.

What have the succeeding five decades brought us? The twelve sources of grievance listed above are entirely relevant to today's realities in Detroit, Chicago, or Cleveland. Youth unemployment, crisis conditions in public school systems, highly visible and recurring instances of excessive use of deadly force by police across the country, and ineffective political institutions are high on the list today in African-American communities in virtually all large American cities, including especially Detroit.

If we are honest about the facts of race in America, it is hard to claim that there is substantial progress in the key concerns of the Kerner Commission report. Here is one key finding in 1967: "Segregation and poverty have created in the racial ghetto a destructive environment totally unknown to most white Americans." And in cities throughout the United States, this devastating reality persists. Racial residential segregation continues; there are continuing racial gaps in education, health, employment, and quality of life; and there continues to be a pattern of police violence against young black men. And, predictably, there is a rising level of anger and disaffection among many millions of young people whose lives are limited by these basic facts. We need to re-read the Kerner Commission report; and we need to act on its wise recommendations.

The Kerner Commission does not effectively describe today's social format, that being one of an abundance of races. Due in no small part to this newly-emerged social format, whites are now experiencing too many social disturbances themselves to care sincerely about the troubles of a race in the presence of whom they have felt, historically, keen discomfort (to say the least).