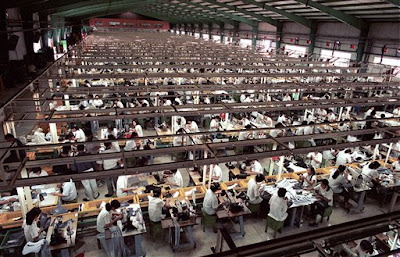 Does economic theory provide anything like a concrete set of reliable policies for creating sustained economic growth in a middle-income country? Some contemporary economists believe that it is possible to answer this question in the affirmative. However, I don't find this confidence justified.

One such economist is Justin Yifu Lin. Lin is a leading Chinese economist who served as chief economist to the World Bank in 2008-2012. So Lin has a deep level of knowledge of the experience of developing countries and their efforts to achieve sustained growth. He believes that the answer to the question posed above is "yes", and he lays out the central components of such a policy in a framework that he describes as the "new structural economics". His analysis is presented in New Structural Economics: A Framework for Rethinking Development and Policy. (The book is also available in PDF format from the World Bank directly; link.)

Lin's analysis is intended to be relevant for all low- and middle-income countries (e.g. Brazil, Nigeria, or Indonesia); but the primary application is China. So his question comes down to this: what steps does the Chinese state need to take to burst out of the "middle income trap" and bring per capita incomes in the country up to the level of high-income countries in the OECD?

So what are the core premises of Lin's analysis of sustainable economic growth? Two are most basic: the market should govern prices, and the state should make intelligent policies and investments that encourage the "right kind" of innovation in economic activity in the country. Here is an extended description of the core claims of the book:


Long-term sustainable and inclusive growth is the driving force for poverty reduction in developing countries, and for convergence with developed economies. The current global crisis, the most serious one since the Great Depression, calls for a rethinking of economic theories. It is therefore a good time for economists to reexamine development theories as well. This paper discusses the evolution of development thinking since the end of World War II and suggests a framework to enable developing countries to achieve sustainable growth, eliminate poverty, and narrow the income gap with the developed countries. The proposed framework, called a neoclassical approach to structure and change in the process of economic development, or new structural economics, is based on the following ideas:

Second, each level of economic development is a point along the continuum from a low-income agrarian economy to a high-income post-industrialized economy, not a dichotomy of two economic development levels (“poor” versus “rich” or “developing” versus “industrialized”). Industrial upgrading and infrastructure improvement targets in developing countries should not necessarily draw from those that exist in high-income countries.

Third, at each given level of development, the market is the basic mechanism for effective resource allocation. However, economic development as a dynamic process entails structural changes, involving industrial upgrading and corresponding improvements in “hard” (tangible) and “soft” (intangible) infrastructure at each level. Such upgrading and improvements require an inherent coordination, with large externalities to firms’ transaction costs and returns to capital investment. Thus, in addition to an effective market mechanism, the government should play an active role in facilitating structural changes. (14-15)

So a state needs to secure the conditions for well-functioning markets; and it needs to establish an industrial strategy that is guided by a careful empirical analysis of the country's comparative advantage in the global economic environment. In practice this seems to amount to the idea that the middle-income economy should identify the leading economies' declining industries and compete with those on the basis of labor costs and mid-level technology. Lin also emphasizes the important role of the state in making appropriate infrastructure investments to support the chosen industrial strategy. This is a "structural economic theory" because it is guided by the idea that a developing economy needs to incrementally achieve structural transformation from a given mix of agriculture, industry, and service to a successor mix, based on the resources held by the economy that give it advantage in a particular set of technologies and production techniques. Here is a representative statement:


Countries at different levels of development tend to have different economic structures due to differences in their endowments. Factor endowments for countries at the early levels of development are typically characterized by a relative scarcity of capital and relative abundance of labor or resources. Their production activities tend to be labor intensive or resource intensive (mostly in subsistence agriculture, animal husbandry, fishery, and the mining sector) and usually rely on conventional, mature technologies and produce “mature,” well-established products. Except for mining and plantations, their production has limited economies of scale. Their firm sizes are usually relatively small, with market transactions often informal, limited to local markets with familiar people. The hard and soft infrastructure required for facilitating that type of production and market transactions is limited and relatively simple and rudimentary. (22)

Some common development strategies fail to conform to these ideas. So, for example, import substitution is a bad basis for economic development, because it subverts the market and it distorts the investment strategies of the state and the private sector; it fails to guide the given economy on a path pursuing incremental comparative advantage (18).

What this analysis leaves out completely is the goal of economic development -- improving human wellbeing. Indeed, the word "wellbeing" does not even appear in the book. And certainly the perspective on development offered by Amartya Sen in his theory of capabilities and realizations is completely absent. This is unfortunate, because it means that the book fails to address the most important issue in development economics: what the fundamental good of economic development is, and how we can best approach that good. Sen's answer is that the fundamental good is to increase the wellbeing of the globe's total population; and he interprets that goal in terms of his idea of human flourishing. (Sen's theory of economic development is provided in many places, including Development as Freedom

. Here is a recent statement by Sen, Stiglitz, and Fitoussi on why GDP and growth in GDP are inadequate ultimate measures of development success; Mismeasuring Our Lives: Why GDP Doesn't Add Up.) Sen's fundamental view is this: the most important goal that a state can have is to create policies that enhance the development of the human capabilities of its population. In particular, social resources should be deployed to enhance education, health, domicile, and personal security. In such an environment individuals can have the fullest satisfaction of their life goals; and they can be the most productive contributors to innovation and growth in their societies. Well-educated and healthy people are an essential component of economic success for a country. But significantly, Lin does not address these "quality of life" factors at all (another phrase that does not occur once in the book).

Even less does Lin's theory address the kinds of issues raised by "post-development" thinkers like Arturo Escobar in Encountering Development: The Making and Unmaking of the Third World. Escobar challenges some of the most basic assumptions of classical economic development theory, beginning with the idea that industry-lead structural transformation is the unique pathway to human flourishing in the less-developed world. Escobar's critique involves several ideas. First is the observation that economic development theory since 1945 has been Eurocentric and implicitly colonial, in that it depends upon exoticized representations of the industrialized North and the traditional agricultural South. Against this colonial representation of global development Escobar emphasizes the need for a more ethnographic and cultural understanding of development. Second, this Eurocentric view brings along with it some crucial distributive implications -- essentially, that the resources and labor of the developing world should continue to provide part of the surplus that supports the affluence of the North. Third, Escobar casts doubt on the value of development "experts" in the design of development strategies for poor countries in the South (46). Local knowledge is a crucial part of sound economic progress for countries like Nigeria, Brazil, or Indonesia; but the development profession seeks to replace local knowledge with expert opinion. So Escobar highlights local knowledge, the importance of culture, and the importance of self-determination in theory and policy as key ingredients of a sustainable plan for economic development in the countries of the post-colonial South.

Why do these alternative approaches to development theory matter? Why is the absence of a discussion of wellbeing, flourishing, or culture an important lacuna in New Structural Economics? Because it results in a view of economic development that lacks a compass. If we haven't given rigorous thought to what the goal of development is -- and Sen demonstrates that it is entirely possible to do that -- then we are guided only by a rote set of recommendations: increase productivity, increase efficiency, increase market penetration, increase per capita income. But the fact of substantial rise in economic inequalities through a growth process means that it is very possible that only a minority of citizens will be affected. And the fact that a typical family's income has risen by 50% may be less important than the availability of a nearby health clinic for their overall wellbeing. And both of these kinds of considerations seem to be relevant in the case of China. It is well documented that there has been a substantial increase in China's income (and wealth) inequalities in the past thirty years (link, link). And it is also reasonably clear that China's commitment to social security provisioning is far lower than that of OECD countries. So it is far from clear that China's recent history of growth has been proportionally successful in enhancing the quality of life and human flourishing of the mass of its population (link).

The unstated assumption is that countries that pursue these prescriptions -- "maintain efficient markets, adopt an industrial strategy that accurately tracks shifts in comparative advantage, support investment in appropriate infrastructure to reduce transaction costs" -- will have superior long-term growth in per capita income and will be better able to ensure enhancements in the quality of life of their citizens. But this is nothing more than naive confidence in "trickle-down" economics. It ignores completely the problem of the likelihood of rising economic inequalities, and it doesn't provide any detailed analysis of how quality of life and human flourishing are supposed to rise. Development economics without capabilities and wellbeing is inherently incomplete; worse, it is a bad guide to policy choices.