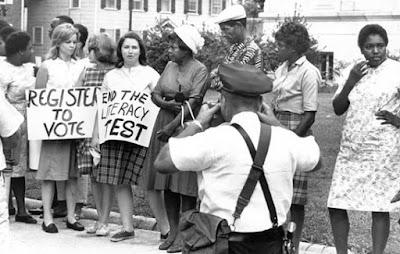 Why is part of the American electoral system so susceptible to right-wing populist appeals, often highlighting themes of racism and intergroup hostility? Doug McAdam and Karina Kloos address the causes of the radical swing to the right of the Republican Party in Deeply Divided: Racial Politics and Social Movements in Postwar America. Here is the key issue the book attempts to resolve:


If the general public does not share the extreme partisan views of the political elites and party activists and, more to the point, is increasingly dismayed and disgusted by the resulting polarization and institutional paralysis that have followed from those views, how has the GOP managed to move so far to the right without being punished by the voters? Our answer — already telegraphed above — is that over the past half century social movements have increasingly challenged, and occasionally supplanted, parties as the dominant mobilizing logic and organizing vehicle of American politics. (Kindle location 303-307).

Not surprisingly given McAdam's long history in the social movements research field, McAdam and Kloos argue that social movements are commonly relevant to electoral and party politics; they suggest that the period of relatively high consensus around the moderate middle (1940s and 1950s) was exceptional precisely because of the absence of powerful social movements during these decades. But during more typical periods, national electoral politics are influenced by both political parties and diffuse social movements; and the dynamics of the latter can have complex effects on the behavior and orientation of the former.

McAdam and Kloos argue that the social movements associated with the 1960s Civil Rights movement and its opposite, the white segregationist movement, put in motion a political dynamic that pushed each party off of its “median voter” platform, with the Republican Party moving increasingly in the direction of white supremacy and preservation of white privilege.


More accurately, it is the story of not one, but two parallel movements, the revitalized civil rights movement of the early 1960s and the powerful segregationist countermovement, that quickly developed in response to the black freedom struggle. (lc 1220)

The dynamics of grassroots social movements are thought to explain how positions that are unpalatable to the broad electorate nonetheless become committed platforms within the parties. (This also seems to explain the GOP preoccupation with “voter fraud” and their efforts at restricting voting rights for people of color.) The primary processes adopted by the parties after the 1968 Democratic convention gave a powerful advantage to highly committed social activists, even if they do not represent the majority of a party's members.

This historical analysis gives an indication of an even more basic political factor in American politics: the polarizing issues that surround race and the struggle for racial equality. The Civil Rights movement of the 1950s and 1960s was a widespread mobilization of large numbers of ordinary citizens in support of equal rights for African Americans in terms of voting, residence, occupation, and education. Leaders like Ralph Abernathy or Julian Bond (or of course, Martin Luther King, Jr.) and organizations like the NAACP and SNCC were effective in their call to action for ordinary people to take visible actions to support greater equality through legal means. This movement had some success in pushing the Democratic Party towards greater advocacy of reforms promoting racial justice. And the political backlash against the Democratic Party following the enactment of civil rights legislation spawned its own grassroots mobilizations of people and associations who objected to these forms of racial progress. And lest we imagine that progressive steps in the struggle for racial justice largely derived from the Democratic Party, the authors remind us that a great deal of the support that civil rights legislation came from liberal Republicans:


The textbook account also errs in typically depicting the Democrats as the movement’s staunch ally. What is missed in this account is the lengths to which all Democratic presidents—at least from Roosevelt to Kennedy—went to placate the white South and accommodate the party’s Dixiecrat wing. (kl 411)

The important point is that as long as the progressive racial views of northern liberal Democrats were held in check and tacit support for Jim Crow remained the guiding—if unofficial—policy of the party, the South remained solidly and reliably in the Democratic column. (lc 1301)

So M&K are right -- issues and interests provide a basis for mobilization within social movements, and social movements in turn influence the evolution of party politics.

But their account suggests a more complicated causal story of the evolution of American electoral politics as well. M&K make the point convincingly that the dynamics of party competition by themselves do not suffice to explain the evolution of US politics to the right, towards a more and more polarized relationship between a divided electorate. They succeed in showing that social movements of varying stripes played a key causal role in shaping party politics themselves. So explaining American electoral politics requires analysis of both parties and movements. But they also inadvertently make another point as well: that there are underlying structural features of American political psychology that explain much of the dynamics of both movements and parties, and these are the facts of racial division and the increasingly steep inequalities of income and wealth that divide Americans. So structural facts about race and class in American society play the most fundamental role in explaining the movements and alliances that have led us to our current situation. Social movements are an important intervening variable, but pervasive features of inequality in American society are even more fundamental.

Or to put the point more simply: we are divided politically because we are divided structurally by inequalities of access, property, opportunity, and outcome; and the mechanisms of electoral politics are mobilized to challenge and defend the systems that maintain these inequalities.

Americans need to know this about our division. It’s cultural not racial. Your identity is your mindset. Racism is red herring to create false division while the wealthy take advantage of that situation. The media lies.

Occam's razor says look at who actually votes if you want to understand political behavior.

In 1965, to groups entered the electorate for the first time: Southern Blacks AND Poor Southern Whites.

Because Grandfather Clauses were held to be unconstitutional in 1915, Jim Crow disenfranchised both Black people AND the white people who most hate Black people.

It took decades for Party ID to switch in the South, but all of this was more or less inevitable after 1965.