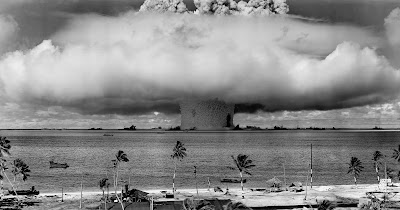 Richard Rhodes' history of the development of the atomic bomb, The Making of the Atomic Bomb, is now thirty years old. The book is crucial reading for anyone who has the slightest anxiety about the tightly linked, high-stakes world we live in in the twenty-first century. The narrative Rhodes provides of the scientific and technical history of the era is outstanding. But there are other elements of the story that deserve close thought and reflection as well.

One is the question of the role of scientists in policy and strategy decision making before and during World War II. Physicists like Bohr, Szilard, Teller, and Oppenheimer played crucial roles in the science, but they also played important roles in the formulation of wartime policy and strategy as well. Were they qualified for these roles? Does being a brilliant scientist carry over to being an astute and wise advisor when it comes to the large policy issues of the war and international policies to follow? And if not the scientists, then who? At least a certain number of senior policy advisors to the Roosevelt administration, international politics experts all, seem to have badly dropped the ball during the war -- in ignoring the genocidal attacks on Europe's Jewish population, for example. Can we expect wisdom and foresight from scientists when it comes to politics, or are they as blinkered as the rest of us on average?

A second and related issue is the moral question: do scientists have any moral responsibilities when it comes to the use, intended or otherwise, of the technologies they spawn? A particularly eye-opening part of the story Rhodes tells is the research undertaken within the Manhattan Project about the possible use of radioactive material as a poisonous weapon of war against civilians on a large scale. The topic seems to have arisen as a result of speculation about how the Germans might use radioactive materials against civilians in Great Britain and the United States. Samuel Goutsmit, scientific director of the US military team responsible for investigating German progress towards an atomic bomb following the Normandy invasion, refers to this concern in his account of the mission in Alsos (7). According to Rhodes, the idea was first raised within the Manhattan Project by Fermi in 1943, and was realistically considered by Groves and Oppenheimer. This seems like a clear case: no scientist should engage in research like this, research aimed at discovering the means of the mass poisoning of half a million civilians.

Leo Szilard played an exceptional role in the history of the quest for developing atomic weapons (link). He more than other physicists foresaw the implications of the possibility of nuclear fission as a foundation for a radically new kind of weapon, and his fear of German mastery of this technology made him a persistent and ultimately successful advocate for a major research and industrial effort towards creating the bomb. His recruitment of Albert Einstein as the author of a letter to President Roosevelt underlining the seriousness of the threat and the importance of establishing a full scale effort made a substantial difference in the outcome. Szilard was entirely engaged in efforts to influence policy, based on his understanding of the physics of nuclear fission; he was convinced very early that a fission bomb was possible, and he was deeply concerned that German physicists would succeed in time to permit the Nazis to use such a weapon against Great Britain and the United States. Szilard was a physicist who also offered advice and influence on the statesmen who conducted war policy in Great Britain and the United States.

Niels Bohr is an excellent example to consider with respect to both large questions (link). He was, of course, one of the most brilliant and innovative physicists of his generation, recognized with the Nobel Prize in 1922. He was also a man of remarkable moral courage, remaining in Copenhagen long after prudence would have dictated emigration to Britain or the United States. He was more articulate and outspoken than most scientists of the time about the moral responsibilities the physicists undertook through their research on atomic energy and the bomb. He was farsighted about the implications for the future of warfare created by a successful implementation of an atomic or thermonuclear bomb. Finally, he is exceptional, on a par with Einstein, in his advocacy of a specific approach to international relations in the atomic age, and was able to meet with both Roosevelt and Churchill to make his case. His basic view was that the knowledge of fission could not be suppressed, and that the Allies would be best served in the long run by sharing their atomic knowledge with the USSR and working towards an enforceable non-proliferation agreement. The meeting with Churchill went particularly badly, with Churchill eventually maintaining that Bohr should be detained as a security risk.

Here is the memorandum that Bohr wrote to President Roosevelt in 1944 (link). Bohr makes the case for public sharing of the scientific and technical knowledge each nation has gained about nuclear weapons, and the establishment of a regime among nations that precludes the development and proliferation of nuclear weapons. Here are a few key paragraphs from his memorandum to Roosevelt:


Indeed, it would appear that only when the question is raised among the united nations as to what concessions the various powers are prepared to make as their contribution to an adequate control arrangement, will it be possible for any one of the partners to assure himself of the sincerity of the intentions of the others.

Of course, the responsible statesmen alone can have insight as to the actual political possibilities. It would, however, seem most fortunate that the expectations for a future harmonious international co-operation, which have found unanimous expressions from all sides within the united nations, so remarkably correspond to the unique opportunities which, unknown to the public, have been created by the advancement of science.

These thoughts are not put forward in the spirit of high-minded idealism; they are intended to serve as sober, fact-based guides to a more secure future. So it is worth considering: do the facts about international behavior justify the recommendations?In fact the world has settled on a hybrid set of approaches: the doctrine of deterrence based on mutual assured destruction, and a set of international institutions to which nations are signatories, intended to prevent or slow the proliferation of nuclear weapons. Another brilliant thinker and 2005 Nobel Prize winner, Thomas Schelling, provided the analysis that expresses the current theory of deterrence in his 1966 book Arms and Influence (link).

So who is closer to the truth when it comes to projecting the behavior of partially rational states and their governing apparatuses? My view is that the author of Micro Motives and Macro Behavior has the more astute understanding of the logic of disaggregated collective action and the ways that a set of independent strategies aggregate to the level of organizational or state-level behavior. Schelling's analysis of the logic of deterrence and the quasi-stability that it creates is compelling -- perhaps more so than Bohr's vision which depends at critical points on voluntary compliance.

This judgment receives support from international relations scholars of the following generation as well. For example, in an extensive article published in 1981 (link) Kenneth Waltz argues that nuclear weapons have helped to make international peace more stable, and his argument turns entirely on the rational-choice basis of the theory of deterrence:


What will a world populated by a larger number of nuclear states look like? I have drawn a picture of such a world that accords with experience throughout the nuclear age. Those who dread a world with more nuclear states do little more than assert that more is worse and claim without substantiation that new nuclear states will be less responsible and less capable of self-­control than the old ones have been. They express fears that many felt when they imagined how a nuclear China would behave. Such fears have proved un­rounded as nuclear weapons have slowly spread. I have found many reasons for believing that with more nuclear states the world will have a promising future. I have reached this unusual conclusion for six main reasons.

First, international politics is a self-­help system, and in such systems the principal parties do most to determine their own fate, the fate of other parties, and the fate of the system. This will continue to be so, with the United States and the Soviet Union filling their customary roles. For the United States and the Soviet Union to achieve nuclear maturity and to show this by behaving sensibly is more important than preventing the spread of nuclear weapons.

Second, given the massive numbers of American and Russian warheads, and given the impossibility of one side destroying enough of the other side’s missiles to make a retaliatory strike bearable, the balance of terror is indes­tructible. What can lesser states do to disrupt the nuclear equilibrium if even the mighty efforts of the United States and the Soviet Union cannot shake it? The international equilibrium will endure. (concluding section)

The logic of the rationality of cooperation, and the constant possibility of defection, seems to undermine the possibility of the kind of quasi-voluntary nuclear regime that Bohr hoped for -- one based on unenforceable agreements about the development and use of nuclear weapons. The incentives in favor of defection are too great.So this seems to be a case where a great physicist has a less than compelling theory of how an international system of nations might work. And if the theory is unreliable, then so are the policy recommendations that follow from it.