Proliferation of hate and intolerance 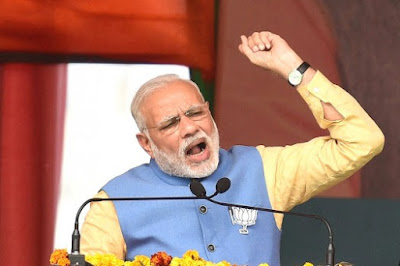 Paul Brass provides a wealth of ethnographic and historical evidence on the causes of Hindu-Muslim violence in India in The Production of Hindu-Muslim Violence in Contemporary India. His analysis here centers on the city of Aligarh in Uttar Pradesh, and he believes that his findings have broad relevance in many parts of India. His key conclusion is worth quoting:


It is a principal argument of this book that the whole political order in post-Independence north India and many, if not most of its leading as well as local actors -- more markedly so since the death of Nehru -- have become implicated in the persistence of Hindu-Muslim riots. These riots have had concrete benefits for particular political organizations as well as larger political uses. Hindu-Muslim opposition, tensions, and violence have provided the principal justification and the primary source of strength for the political existence of some local political organizations in many cities and towns in north India linked to a family of militant Hindu nationalist organizations whose core is an organization founded in 1925, known as the Rashtriya Swayamsevak Sangh (RSS). Included in this family, generally called the Sangh Parivar, are an array of organizations devoted to different tasks: mass mobilization, political organization, recruitment of students, women, and workers, and paramilitary training. The leading political organization in this family, originally called the Jan Sangh, is now the Bharatiya Janata Party (BJP), currently (2001) the predominant party in India's governing coalition. All the organizations in the RSS family of militant Hindu organizations adhere to a broader ideology of Hindutva, of Hindu nationalism that theoretically exists independently of Hindu-Muslim antagonisms, but in practice has thrived only when that opposition is explicitly or implicitly present. (6-7)

Brass provides extensive evidence, that is, for the idea that a key cause and stimulant to ethnic and religious conflict derives from the political entrepreneurs and organizations who have a political interest in furthering conflict among groups.

Let's think about the mechanics of the spread of attitudes of intolerance, distrust, and hate throughout a population. What kinds of factors and interactions lead individuals to increase the intensity of their negative beliefs and attitudes towards other groups? What drives the spread of hate and intolerance through a population? (Donatella della Porta, Manuela Caiani and Claudius Wagemann's Mobilizing on the Extreme Right: Germany, Italy, and the United States is a valuable recent effort at formulating a political sociology of right-wing extremism in Italy, Germany, and the United States. Here is an earlier post that also considers this topic; link.)

Here are several mechanisms that recur in many instances of extremist mobilization.

Exposure to inciting media. Since the Rwandan genocide the role of radio, television, and now the internet has been recognized in the proliferation and intensification of hate. The use of fake news, incendiary language, and unfounded conspiracy theories seems to have accelerated the formation of constituencies for the beliefs and attitudes of hate. Breitbart News is a powerful example of a media channel specifically organized around conveying suspicion, mistrust, disrespect, and alienation among groups. ("Propaganda and conflict: Evidence from the Rwandan genocide" is a finegrained study of Rwandan villages that attempts to estimate the impact of a radio station on violent participation by villagers; link.)

Incidents. People who have studied the occurrence of ethnic violence in India have emphasized the role played by various incidents, real or fictitious, that have elevated emotions and antagonisms in one community or another. An assault or a rape, a house or shop being burned, even an auto accident can lead to a cascade of heightened emotions and blame within a community, communicated by news media and word of mouth. These sorts of incidents play an important role in many of the conflicts Brass describes.

Organizations and leaders. Organizations like white supremacist clubs and their leaders make deliberate attempts to persuade outsiders to join their beliefs. Leaders make concerted and intelligent attempts to craft messages that will appeal to potential followers, deliberately cultivating the themes of hate and racism that they advocate. Young people are recruited at the street level into groups and clubs that convey hateful symbols and rhetoric. Political entrepreneurs take advantage of the persuasive power of mobilization efforts based on divisiveness and intolerance. In Brass's account of Hindu-Muslim conflict, that role is played by RSS, BJP, and many local organizations motivated by this ideology.

Music, comics, and video games. Anti-hate organizations like the Southern Poverty Law Center have documented the role played by racist and anti-Semitic or anti-Muslim themes in popular music and other forms of entertainment (link). These creations help to create a sense of shared identity among members as they enjoy the music or immerse themselves in the comics and games. Blee and Creasap emphasize the importance of the use of popular culture forms in mobilization strategies of the extreme right in "Conservative and right-wing movements"; link.

The presence of a small number of "hot connectors". It appears to be the case that attitudes of intolerance are infectious to some degree. So the presence of a few outspoken bigots in a small community may spread their attitudes to others, and the density of local social networks appears to be an important factor in the spread of hateful attitudes. The broader the social network of these individuals, the more potent the infective effects of their behavior are likely to be. (Here is a recent post on social-network effects on mobilization; link.)

There is a substantial degree of orchestration in most of these mechanisms -- deliberate efforts by organizations and political entrepreneurs to incite and channel the emotions of fear, hostility, and hate among their followers and potential followers. Strategies of recruitment for extremist and hate-based parties deliberately cultivate the mindset of hate among young people and disaffected older people (link). And the motivations seem to be a mix of ideological commitment to a worldview of hate and more prosaic self-interest -- power, income, resources, publicity, and influence.

But the hard questions remaining are these: how does intolerance become mainstream? Is this a "tipping point" phenomenon? And what mechanisms and forces exist to act as counter-pressures against these mechanisms, and promulgate attitudes of mutual respect and tolerance as affirmative social values?

Here is a nice graphic from Arcand and Chakraborty, "What Explains Ethnic Violence? Evidence from Hindu-Muslim Riots in India"; link. Gujarat, Maharashtra, and Uttar Pradesh show the largest concentration of riots over the period 1960-1995. There appears to be no correlation by time in the occurrence of riots in the three states. 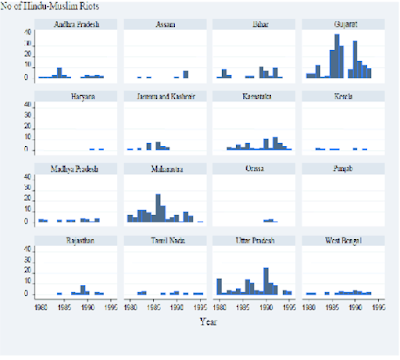 And here is a 1996 report on the incidence of religious violence in India by Human Rights Watch; link.
Posted by Dan Little at 10:56 PM