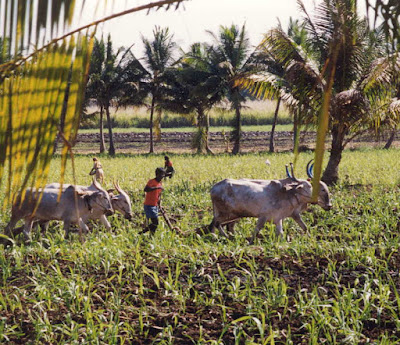 Agriculture remains the primary source of income for India's population, and the majority of India's farmers subsist on small farms, less than two hectares (five acres). It is all but self evident that these facts imply continuing poverty and low quality of life for rural Indians. And yet the basic facts and economics of the small farm sector are poorly understood.

The most recent product of the Project on Agrarian Relations in India (PARI) focuses on exactly this question (link). Madhura Swaminathan and Sandipan Baksi's recent volume, How Do Small Farmers Fare?: Evidence from Village Studies in India, attempts to provide a multidimensional appraisal of the complex realities of the small farm economy in India, including labor, crop productivity, incomes, costs, fertilizer use, credit, climate change, education, living standards, and an overall assessment of how small farmers fare. The book draws upon largescale statistical data collected by the Indian government, but the fundamental insights offered in each chapter are drawn from the intensive village studies conducted by PARI researchers over the past dozen years (link). And, as the resolution and quality of the essays in this volume attest, the PARI village studies constitute an enormously valuable source of information on the rural economy in India in spite of the small number of villages included.

T. Sivamurugan and Madhura Swaminathan provide an excellent survey of the methodology and scope of the PARI project in their chapter on this subject. Their chapter provides detailed information about the methodology pursued in designing and carrying out these village studies in a range of regions in the country.

The Project on Agrarian Relations in India (PARI) began in 2006. One of the objectives of the Project is to analyse village-level production, production systems and livelihoods, and the socio-economic characteristics of different strata of the rural population. As of 2016, 25 villages from 11 States of the country, covering a wide range of agro-ecological regions in the country, have been studied under PARI. In this volume, we have used data on 17 villages from 9 States. (25)

It is apparent that the PARI project considers only a small percentage of India’s villages and farming regions. However, the locations chosen have been selected to provide a useful indication of the economic status of villages and farm households in a variety of locations. 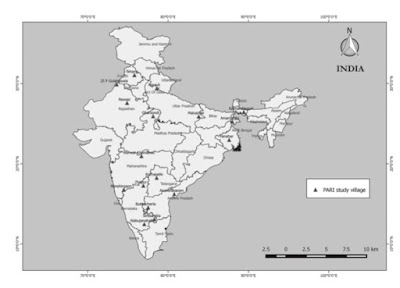 The summary data provided by this research are striking:

According to the Agricultural Census of 2010–11, there were a total of 138.35 million operational holdings in India. The total area operated was 159.59 million hectares and the average size of an operational holding was 1.15 hectares. The average size of all holdings of size 2 hectares or less – which constituted small and marginal holdings as per the official definition – was 0.60 hectare. Holdings of size 2 hectares or less accounted for around 85 per cent of all holdings and 45 per cent of the total area operated. The number of persons who were part of small farmer households was close to half a billion. (2)

Almost 50% of India's total population consists of small farmers and their families, and 85% of all farms are less than two hectares. Plainly the situation of small farms is of enormous importance to the overall social wellbeing of India.

A particularly important topic in this volume is the assessment of small farmers' incomes that the studies permit. The summary conclusion is that India's hundreds of millions of small farmers earn incomes only slightly higher than subsistence. Rural manual workers earn even lower income.

An important measure of quality of life of poor people is number of years of schooling. The PARI studies show that children in small farmer households have extremely low levels of schooling, and that there are significant difference between boys and girls. Chapter 11 finds similar evidence of deprivation with regard to other material features of quality of life: access to clean drinking water, toilets, electricity, and living space and housing. 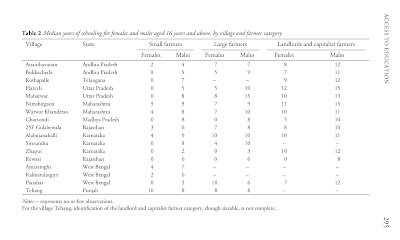 Moreover, the studies demonstrate that these kinds of deprivation are further exacerbated by facts of caste and religion.


While small farmer households are the worst off among the peasantry, there exist disparities and differences within the class of small farmers on the basis of social identity. The analysis presented in this chapter shows that SC, ST, and Muslim households among small farmers are far more deprived in terms of housing and access to basic household amenities than households belonging to other social groups. This points to the fact that in Indian society, and more so in rural society, deprivation is not merely economic but social as well. Even though a uniform criterion was used to define small farmer households, we find that higher levels of deprivation among SC, ST, and Muslim households are an outcome of the historical exclusion and accumulated disadvantages faced and inherited by these social groups. Continued practices of untouchability, physical and residential segregation, and isolation shape current outcomes for these groups. (327)

It has sometimes been maintained that small farming is potentially as productive as largescale commercial farming. It is maintained that intensive family labor has the potential for producing crops as efficiently as mechanized capital intensive farming -- presumably because of the lack of efficiencies of scale in farming. The research reported here by Venkatesh Athreya and colleagues rebuts this longstanding assumption about small-scale farming:


At the core of the argument in favour of small-scale farming in terms of its efficiency is the alleged inverse relationship between land productivity and size. It states that small farms are more efficient, de ned in terms of yield per acre, than large farms. It is argued that this relationship holds true more or less universally. This assertion was also the basis of the debate in India on farm size and productivity based on findings from the Farm Management Studies. This argument, which continued through the 1960s, has seen a recent revival. Apart from the empirical challenge posed to this formulation (especially by the green revolution), it has also been theoretically rebutted by Terence Byres…. The body of empirical evidence from FAS surveys too does not support the hypothesis of an inverse relationship between farm size and output per unit of land.

One thing that is noteworthy in this collection is the significant use that the authors make of classical Marxist analysis of agricultural development and the peasantry. Unlike other national traditions in the social sciences, Indian researchers continue to find insights and valuable frameworks in the writings of Marx, Lenin, Kautsky, and other Marxist writers on these topics. And, as the many texts cited in the introductory chapter illustrate, these figures were in fact careful observers of the agrarian systems of Europe. Here is how Athreya et al summarize the Marxist perspective in the Indian context:


The attitude towards the peasantry in the context of India’s development, especially after the country won political independence, has been a matter of much discussion in Indian Marxist literature. Comprehensive land reform is essential to the completion of the democratic revolution in India. Achievement of the democratic revolution under a working class leadership in alliance with the peasantry, especially poor peasants and agricultural labourers as key rural classes in this process, is necessary for further democratic advance. Such a view envisages the continued presence of a large population of small and middle peasants for a long time. We need public policy that supports the peasantry, especially focusing on developing the productive forces among them. (14)

This volume is a very important contribution to development studies in India and other parts of South and Southeast Asia. The dynamics of agriculture remain a critical factor in the social progress of these countries, and this careful and detailed research will provide a basis for constructing more effective development policies in India and elsewhere. And the data suggest that the situation of the rural sector in India is in crisis: incomes for small farmers and landless workers are extremely low with few indications of improvement, and measures of quality of life mirror these findings.

India's agriculture is composed of many crops, with the foremost food staples being rice and wheat. Indian farmers also grow pulses, potatoes, sugarcane, oilseeds, and such non-food items as cotton, tea, coffee, rubber, and jute (a glossy fiber used to make burlap and twine). India is a fisheries giant as well. A total catch of about 3 million metric tons annually ranks India among the world's top 10 fishing nations. Despite the overwhelming size of the agricultural sector, however, yields per hectare of crops in India are generally low compared to international standards. Improper water management is another problem affecting India's agriculture. At a time of increasing water shortages and environmental crises, for example, the rice crop in India is allocated disproportionately high amounts of water. One result of the inefficient use of water is that water tables in regions of rice cultivation, such as Punjab, are on the rise, while soil fertility is on the decline. Aggravating the agricultural situation is an ongoing Asian drought and inclement weather. Although during 2000-01 a monsoon with average rainfall had been expected, prospects of agricultural production during that period were not considered bright. This has partially been due to relatively unfavorable distribution of rainfall, leading to floods in certain parts of the country and droughts in some others.
Indian Agriculture.
Despite the fact that agriculture accounts for as much as a quarter of the Indian economy and employs an estimated 60 percent of the labor force, it is considered highly inefficient, wasteful, and incapable of solving the hunger and malnutrition problems. Despite progress in this area, these problems have continued to frustrate India for decades. It is estimated that as much as one-fifth of the total agricultural output is lost due to inefficiencies in harvesting, transport, and storage of government-subsidized crops.