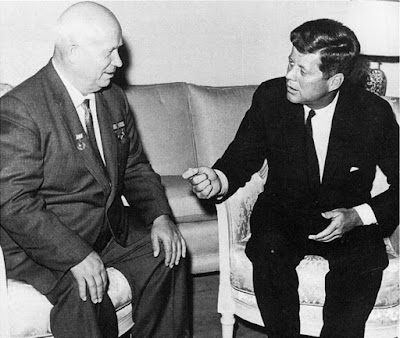 Odd Arne Westad's The Cold War: A World History is a fascinating counterpoint to Tony Judt's Postwar: A History of Europe Since 1945. There are some obvious differences -- notably, Westad takes a global approach to the Cold War, with substantial attention to the dynamics of Cold War competition in Asia, Africa, Latin America, and the Middle East, as well as Europe, whereas Judt's book is primarily focused on the politics and bi-polar competition of Communism and liberal democratic capitalism in Europe. Westad is a real expert on East Asia, so his global perspectives on the period are very well informed. Both books provide closely reasoned and authoritative interpretations of the large events of the 1950s through the 1990s. So it is very interesting to compare them from an historiographic point of view.

The feature that I'd like to focus on here is Westad's perspective on these historical developments from the point of view of an international-relations conceptual framework. Westad pays attention to the economic and social developments that were underway in the West and the Eastern bloc; but his most frequent analytical question is, what were the intentions, beliefs, and strategies of the nations which were involved in competition throughout the world in this crucial period of world history? Ideology and social philosophy play a large role in his treatment. Judt too offers interpretations of what leaders like Truman, Gorbachev, or Thatcher were trying to accomplish; but the focus of his historiographical thinking is more on the circumstances of ordinary life and the social, economic, and political changes through which ordinary people shaped their political identities across Europe. In Westad's framework there is an underlying emphasis on strategic rationality -- and failures of rationality -- by leaders and national governments that is more muted in Judt's analysis. The two perspectives are not incompatible; but they are significantly different.

Here are a few illustrative passages from Westad's book revealing the orientation of his interpretation around interest and ideology:


The Cold War originated in two processes that took place around the turn of the twentieth century. One was the transformation of the United States and Russia into two supercharged empires with a growing sense of international mission. The other was the sharpening of the ideological divide between capitalism and its critics. These came together with the American entry into World War I and with the Russian Revolution of 1917, and the creation of a Soviet state as an alternative vision to capitalism. (19)

The contest between the US and the USSR over the future of Germany is a good example.


The reasons why Stalin wanted a united Germany were exactly the same reasons why the United States, by 1947, did not. A functional German state would have to be integrated with western Europe in order to succeed, Washington found. And that could not be achieved if Soviet influence grew throughout the country. This was not only a point about security. It was also about economic progress. The Marshall Plan was intended to stimulate western European growth through market integration, and the western occupation zones in Germany were crucial for this project to succeed. Better, then, to keep the eastern zone (and thereby Soviet pressure) out of the equation. After two meetings of the allied foreign ministers in 1947 had failed to agree on the principles for a peace treaty with Germany (and thereby German reunification), the Americans called a conference in London in February 1948 to which the Soviets were not invited.(109)

And the use of development aid during reconstruction was equally strategic:


For Americans and western European governments alike, a major part of the Marshall Plan was combatting local Communist parties. Some of it was done directly, through propaganda. Other effects on the political balance were secondary or even coincidental. A main reason why Soviet-style Communism lost out in France or Italy was simply that their working classes began to have a better life, at first more through government social schemes than through salary increases. The political miscalculations of the Communist parties and the pressure they were under from Moscow to disregard the local political situation in order to support the Soviet Union also contributed. When even the self-inflicted damage was not enough, such as in Italy, the United States experimented with covert operations to break Communist influence. (112)

Soviet miscalculations were critical in the development of east-west power relations. Westad treats the Berlin blockade in these terms:


The Berlin blockade, which lasted for almost a year, was a Soviet political failure from start to finish. It failed to make west Berlin destitute; a US and British air-bridge provided enough supplies to keep the western sectors going. On some days aircraft landed at Tempelhof Airport at three minute intervals. Moscow did not take the risk of ordering them to be shot down. But worse for Stalin: the long-drawn-out standoff confirmed even to those Germans who had previously been in doubt that the Soviet Union could not be a vehicle for their betterment. The perception was that Stalin was trying to starve the Berliners, while the Americans were trying to save them. On the streets of Berlin more than half a million protested Soviet policies. (116)

I don't want to give the impression that Westad's book ignores non-strategic aspects of the period. His treatment of McCarthyism, for example, is quite astute:


The series of hearings and investigations, which accusations such as McCarthy’s gave rise to, destroyed people’s lives and careers. Even for those who were cleared, such as the famous central Asia scholar Owen Lattimore, some of the accusations stuck and made it difficult to find employment. It was, as Lattimore said in his book title from 1950, Ordeal by Slander. For many of the lesser known who were targeted—workers, actors, teachers, lawyers—it was a Kafkaesque world, where their words were twisted and used against them during public hearings by people who had no knowledge of the victims or their activities. Behind all of it was the political purpose of harming the Administration, though even some Democrats were caught up in the frenzy and the president himself straddled the issue instead of publicly confronting McCarthy. McCarthyism, as it was soon called, reduced the US standing in the world and greatly helped Soviet propaganda, especially in western Europe. (120)

It is interesting too to find areas of disagreement between the two historians. Westad's treatment of Leonid Brezhnev is sympathetic:


Brezhnev and his colleagues’ mandate was therefore quite clear. Those who had helped put them in power wanted more emphasis on planning, productivity growth, and welfare. They wanted a leadership that avoided unnecessary crises with the West, but also stood up for Soviet gains and those of Communism globally. Brezhnev was the ideal man for the purpose. As a leader, he liked to consult with others, even if only to bring them onboard with decisions already taken. After the menacing Stalin and the volatile Khrushchev, Brezhnev was likeable and “comradely”; he remembered colleagues’ birthdays and the names of their wives and children. His favorite phrases were “normal development” and “according to plan.” And the new leader was easily forgiven a certain vagueness in terms of overall reform plans as long as he emphasized stability and year-on-year growth in the Soviet economy.... Contrary to what is often believed, the Soviet economy was not a disaster zone during the long reign of Leonid Brezhnev and the leadership cohort who came into power with him. The evidence points to slow and limited but continuous growth, within the framework provided by the planned economy system. The best estimates that we have is that the Soviet economy as a whole grew on average 2.5 to 3 percent per year during the 1960s and ’70s. (367)

By contrast, Judt treats Brezhnev less sympathetically and as a more minor figure:


The economic reforms of the fifties and sixties were from the start a fitful attempt to patch up a structurally dysfunctional system. To the extent that they implied a half-hearted willingness to decentralize economic decisions or authorize de facto private production, they were offensive to hardliners among the old guard. But otherwise the liberalizations undertaken by Khrushchev, and after him Brezhnev, presented no immediate threat to the network of power and patronage on which the Soviet system depended. Indeed, it was just because economic improvements in the Soviet bloc were always subordinate to political priorities that they achieved so very little. (Judt, 424)

Perhaps the most striking contrast between these two books is the scope that each provides. Judt is focused on the development of postwar Europe, and he does an unparalleled job of providing both detail and interpretation of the developments over these decades in well over a dozen countries. Westad is interested in providing a global history of the Cold War, and his expertise on Asian history and politics during this period, as well as his wide-ranging knowledge of developments in Africa, the Middle East, and Latin America, permits him to succeed in this goal. His representation of this history is nuanced and insightful at every turn. The Cold War unavoidably involves a focus on the USSR and the US and their blocs as central players; but Westad's account is by no means eurocentric. His treatments of India, China, and Southeast Asia are particularly excellent, and his account of turbulence and faulty diplomacy in the Middle East is particularly timely for the challenges we face today.

Here are a couple of interesting video lectures by Westad and Judt.