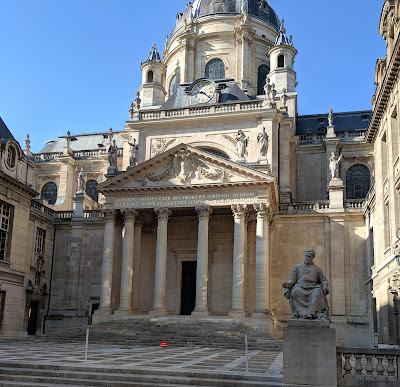 I've just had the singular opportunity of participating in the habilitation examination of Gianluca Manzo at the Sorbonne, based on his excellent manuscript on the relevance of agent-based models for justifying causal claims in the social sciences. Manzo is currently a research fellow in sociology at CNRS in Paris (Centre National de la Recherche Scientifique), and is a prolific contributor to analytical sociology and computational social science. The habilitation essay is an excellent piece of work and I trust it will be published as an influential monograph. Manzo has the distinction of being expert both on the philosophical and theoretical debates that are underway about social causation and an active researcher in the field of ABM simulations. Pierre Demeulenaere served as a generous and sympathetic mentor. The committee consisted of Anouk Barberousse, Ivan Ermakoff, Andreas Flache, Olivier Godechot, and myself, and reviewer comments and observations were of the highest quality and rigor. It was a highly stimulating session.

One element of our conversation was especially enlightening to me. I have written a number of times in Understanding Society and elsewhere about the utility of ABM models, and one line of thought I have developed is a critique of what I have labeled "ABM fundamentalism" -- the view that ABM models are the best possible technique for constructing social explanations for every possible subject in the social sciences (link). This view is expressed in Joshua Epstein's slogan, "If you didn't grow it, you didn't explain it." I maintain that ABM is a useful technique, but only one of many methods appropriate to the problem of constructing explanations of interesting sociological outcomes (link). So I advocate for theoretical and methodological pluralism when it comes to the ABM program.

I asked Gianluca whether he would agree that ABM fundamentalism is incorrect, and was surprised to find that he defends the universal applicability of ABM as a tool to implement any sociological theory. According to him, it is a perfectly general and universal modeling platform that can in principle be applied to any sociological problem. He also made it clear that he does not maintain that the use of ABM methods is optimal for every sociological problem of explanation. His defense of the universal applicability of ABM simulation techniques therefore does not imply that Manzo privileges these techniques as best for every sociological problem. But as a formal matter, he holds that ABM technology possesses the resources necessary to represent any fully specified social theory within a simulation.

The subsequent conversation succeeded in clarifying the underlying source of disagreement for me. What I realized in the discussion that ensued is that I was conflating two things in my label of ABM fundamentalism: the simulation technology and the substantive doctrine of generative social science. Epstein is a generativist, in the sense that he believes that social outcomes need in principle to be generated from a representation of facts about the individuals who make it up (Generative Social Science: Studies in Agent-Based Computational Modeling). Epstein is also an advocate of ABM techniques because they represent a particularly direct way of implementing a generativist explanation. But what Gianluca showed me is that ABM is not formally committed to the generativist dogma, and that an ABM simulation can perhaps incorporate factors at any social level. The insight that I gained, then, is that I should separate the substantive view of generativism from the formal mathematical tools of ABM simulations techniques.

I am still unclear how this would work -- that is, how an ABM simulation might be created that did an adequate job of representing features at a wide range of levels -- actors, organizations, states, structures, and ideologies. For example, how could an ABM simulation be designed that could capture a complex sociological analysis such as Tilly's treatment of the Vendée, with peasants, protests, and merchants, the church, winegrowers' associations, and the strategies of the state? Tilly's historical narrative seems inherently multi-stranded and irreducible to a simulation. Similar points could be made about Michael Mann's comparative historical account of fascisms or Theda Skocpol's analysis of social revolutions.

So there is still an open question for me in this topic. But I think I am persuaded that the fundamentalism to which I object is the substantive premise of generativism, not the formal computational methods of ABM simulations themselves. And if Gianluca is correct in saying that ABM is a universal simulation platform (as a Turing machine is a universal computational device) then the objection is misplaced.

So this habilitation examination in Paris had exactly the effect for me that we would hope for in an academic interaction -- it led me to look at an important issue in a somewhat different way. Thank you, Gianluca!
Posted by Dan Little at 10:32 AM

"I am still unclear how this would work -- that is, how an ABM simulation might be created that did an adequate job of representing features at a wide range of levels -- actors, organizations, states, structures, and ideologies. For example, how could an ABM simulation be designed that could capture a complex sociological analysis such as Tilly's treatment of the Vendée, with peasants, protests, and merchants, the church, winegrowers' associations, and the strategies of the state?"

I think this is an illuminating question too. I have much more background on the simulation side than the sociological side but I flatter myself that I might understand enough of both to be helpful.

One can simulate state for objects at the other levels (organizations, ideologies). In the higher-level theory, those objects interact in particular ways that can be reflected in the situation. Individual actors also interact with the higher-level objects, so one might define a flow gradient that controls the rate of individuals moving from one ideology to another, based on factors at the individual level and the higher-level objects. The flow gradient doesn't specify which specific actors move ideology, but the actors can be randomly selected and the simulation tested for its sensitivity to that selection.

I wish I could give more detailed examples in this domain but I cannot and I am unfamiliar with Tilly here. But ABM would ask quantitative questions of complex sociological analyses that are rarely asked or answered. Such as what, quantitatively, were the preconditions for protests (why didn't they happen earlier, why weren't there more or fewer than there were), and when a protest occurs, which agents are proximately affected (are there tipping points), what are the specific features of the "church" organization that encourage/discourage protests, are these features binary or continuous/thresholded, etc.

Also it must be said that there are ABM models, and then there are stories told about ABM models. A complex sociological analysis often has a large story component, and it is neither tractable nor desirable to try to reduce all elements of that story to the model proper. One of the (in my view laudable) things ABM does in this context is to separate the model proper from the story told about the model in a very clear way that is often obscured.

I was on Quora the other day and tried to answer the question: "How credible are conclusions drawn from Agent Based Modelling. I'd be curious to know what you think. Thanks for your blog... I'm a long-time follower. https://www.quora.com/How-credible-are-conclusions-drawn-from-agent-based-modelling/answer/Michael-Bishop-1

It is important to remember that while ABM may, in principle, be used to model any theory, the step from possible to realized may be very long, indeed. I am reminded of a comment in Page and Miller on computational models of complex systems to the effect that the agents in existing models tend to be either too stupid, always using the same heuristics, or too smart, doing game-theoretic calculations before every action. Why? Because agents that have personalities and learn in the ways that human do require models that require computation on a scale that dwarfs existing computers.

We may one day reach that moment described in a science fiction story in which all of the knowledge in the known universe is stored in one computer and the president of the galaxy gets to ask the first question. He asks, “Is there a God?” A lightning bold fuses the On switch closed and a might voice replies, “Now there is.”

We aren’t there yet.