The US Chemical Safety Board 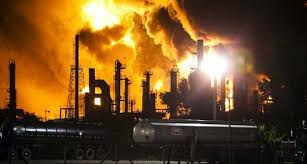 The Federal agency responsible for investigating chemical and petrochemical accidents in the United States is the Chemical Safety Board (link). The mission of the Board is described in these terms:


The CSB is an independent federal agency charged with investigating industrial chemical accidents. Headquartered in Washington, DC, the agency’s board members are appointed by the President and confirmed by the Senate.
The CSB’s mission is to “drive chemical safety change through independent investigation to protect people and the environment.”
The CSB’s vision is “a nation safe from chemical disasters.”
The CSB conducts root cause investigations of chemical accidents at fixed industrial facilities. Root causes are usually deficiencies in safety management systems, but can be any factor that would have prevented the accident if that factor had not occurred. Other accident causes often involve equipment failures, human errors, unforeseen chemical reactions or other hazards. The agency does not issue fines or citations, but does make recommendations to plants, regulatory agencies such as the Occupational Safety and Health Administration (OSHA) and the Environmental Protection Agency (EPA), industry organizations, and labor groups. Congress designed the CSB to be non-regulatory and independent of other agencies so that its investigations might, where appropriate, review the effectiveness of regulations and regulatory enforcement.

CSB was legislatively conceived in analogy with the National Transportation Safety Board, and its sole responsibility is to conduct investigations of major chemical accidents in the United States and report its findings to the public. It is not subordinate to OSHA or EPA, but it collaborates with those (and other) Federal agencies as appropriate (link). It has no enforcement powers; its sole function is to investigate, report, and recommend when serious chemical or petrochemical accidents have occurred.

One of its most important investigations concerned the March 23, 2005 Texas City BP refinery explosion. A massive explosion resulted in the deaths of 15 workers, injuries to over 170 workers, and substantial destruction of the refinery infrastructure. CSB conducted an extensive investigation into the “root causes” of the accident, and assigned substantial responsibility to BP’s corporate management of the facility. Here is the final report of that investigation (link), and here is a video prepared by CSB summarizing its main findings (link).


The key findings of the CSB report focus on the responsibility of BP management for the accident. Here is a summary of the CSB assessment of root causes:

Underlying almost all of these failures to manage this complex process with a priority on “process safety” rather than simply personal safety is a corporate mandate for cost reduction:


In late 2004, BP Group refining leadership ordered a 25 percent budget reduction “challenge” for 2005. The Texas City Business Unit Leader asked for more funds based on the conditions of the Texas City plant, but the Group refining managers did not, at first, agree to his request. Initial budget documents for 2005 reflect a proposed 25 percent cutback in capital expenditures, including on compliance, HSE, and capital expenditures needed to maintain safe plant operations.[208] The Texas City Business Unit Leader told the Group refining executives that the 25 percent cut was too deep, and argued for restoration of the HSE and maintenance-related capital to sustain existing assets in the 2005 budget. The Business Unit Leader was able to negotiate a restoration of less than half the 25 percent cut; however, he indicated that the news of the budget cut negatively affected workforce morale and the belief that the BP Group and Texas City managers were sincere about culture change. (176)

And what about corporate accountability? What did BP have to pay in recompense for its faulty management of the Texas City refinery and the subsequent damages to workers and local residents? The answer is, remarkably little. OSHA assessed a fine of $50.6 million for its violations of safety regulations (link, link), and it committed to spend at least $500M to take corrective steps within the plant to protect the safety of workers. This was a record fine at the time; and yet it might very well be seen by BP corporate executives as a modest cost of doing business in this industry. It does not seem to be of the magnitude that would lead to fundamental change of culture, action, and management within the company.

BP commissioned a major review of BP refinery safety in all five of its US-based refineries following release of the CSB report. This study became the Baker Panel REPORT OF THE BP U.S. REFINERIES INDEPENDENT SAFETY REVIEW PANEL (JANUARY 2007) (link). The Baker Panel consisted of fully qualified experts on industrial and technological safety who were in a very good position to assess the safety management and culture of BP in its operations of its five US-based refineries. The Baker Panel was specifically directed to refrain from attempting to analyze responsibility for the Texas City disaster and to focus its efforts on assessing the safety culture and management direction that were currently to be found in BP's five refineries. Here are some central findings:

These findings largely validate and support the critical assessment of BP's safety management practices in the CSB report.

It seems clear that an important part of the substantial improvement that has occurred in aviation safety in the past fifty years is the effective investigation and reporting provided by the NTSB. NTSB is an authoritative and respected bureau of experts whom the public trusts when it comes to discovering the causes of aviation disasters. The CSB has a much shorter institutional history -- it was created in 1990 -- but we need to ask a parallel question here as well: Does the CSB provide a strong lever for improving safety practices in the chemical and petrochemical industries through its accident investigations; or are industry actors largely free to continue their poor management practices indefinitely, safe in the realization that large chemical accidents are rare and the costs of occasional liability judgments are manageable?