Personalized power at the local level 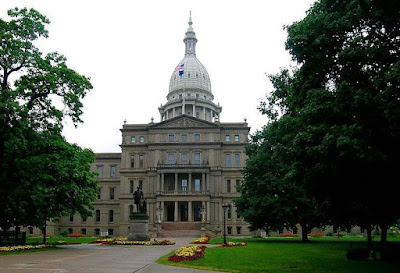 How does government work? We often understand this question as one involving the institutions and actors within the Federal government. But there is a different zone of government and politics that is also very important in public life in the United States, the practical politics and exercise of power at the state and local levels.

Here is an earlier post that addresses some of these issues as well; link. There I present three scenarios for how our democracy works: the ideal case, the "not-so-ideal" case, and the "nightmare" case.


The Nightmare Scenario Elected officials have no sincere adherence to the public good; they pursue their own private and political interests through all the powers available to them. Elected officials are sometimes overtly corruptible, accepting significant gifts in exchange for official performance. Elected officials are intimidated by the power of private interests (corporations) to fund electoral opposition to their re-election. Regulatory agencies are dominated by the industries they regulate; independent commissioners are forced out of office; and regulations are toothless when it comes to environmental protection, wilderness protection, health and safety in the workplace, and food safety. Lobbyists for special interests and corporations have almost unrestricted access to legislators and regulators, and are generally able to achieve their goals.

This is the nightmare scenario if one cares about democracy, because it implies that the apparatus of government is essentially controlled by private interests rather than the common good and the broad interests of society as a whole. It isn't "pluralism", because there are many important social interests not represented in this system in any meaningful way: poor people, non-unionized workers, people without health insurance, inner-city youth, the environment, people exposed to toxic waste, ...

If anything, personal networks of power and influence appear to be of even greater importance at this level of government than at the Federal level.

So how does personal power work at the local level? Power within a democracy is gained and wielded through a variety of means: holding office within an important institution, marshaling support from a political party, possessing a network of powerful supporters in business, labor, and advocacy groups; securing access to significant sources of political funding; and other mechanisms we can think of. Mayors, governors, and county executives have powers of appointment to reward or punish their supporters and competitors; they have the ability to influence purchasing and other economic levers of the municipality; and they have favors to trade with legislators.

Essentially the question to consider here is how power is acquired, exercised, and maintained by a few powerful leaders in state, county, and city, and what are the barely-visible lines through which these power relations are implemented and maintained. This used to be called "machine politics," but as Jessica Trounstine demonstrates in Political Monopolies in American Cities: The Rise and Fall of Bosses and Reformers, the phenomenon is broader than Tammany Hall and the mayor-boss politics of the nineteenth century through Mayor Daly's reign in Chicago. The term Trounstine prefers is "political monopolies":


I argue that it is not whether a government is machine or reform that determines its propensity to represent the people, but rather its success at stacking the deck in its favor. When political coalitions successfully limit the probability that they will be defeated over the long term -- when they eliminate effective competition -- they achieve a political monopoly. In these circumstances the governing coalition gains the freedom to be responsive to a narrow segment of the electorate at the expense of the broader community. (KL 140)

What are the levers of influence available to a politician in state and local government that permit some executives to achieve monopoly power? How do mayors, county executives, and political party leaders exercise power over the decisions that are to be made? Once they have executive power they are able to reward friends and punish enemies through appointments to desirable jobs, through favorable access to government contracts (corrupt behavior!), through the power of their Rolodexes (their networks of relationships with other powerful people), through their influence on political party decision-making, through the power of some of their allies (labor unions, business associations, corporations), and through their ability to influence the flow of campaign funding. They have favors to dispense and they have punishments they can dole out.

Consider Southeast Michigan as an interesting example. Michigan's largest counties have a history of longterm "monopoly" leadership. Wayne County was led for 15 years by Ed McNamara and Oakland County was led by L. Brooks Patterson, and both men wielded a great deal of power in their offices during their tenure. Neither was seriously challenged by strong competing candidates, and Patterson died in office at the age of 80. Some of the levers of power in Wayne County came to light during a corruption investigation in 2011. Below are links to several 2011 stories in MLive on the details of this controversy involving the Wayne County Executive and the Airport Authority Board.

As noted in many places in Understanding Society, corporations have a great deal of power in political decision-making in the United States. Corporate influence is wielded through effective lobbying, political and political action contributions, and the "social capital" of networks of powerful individuals. (Just consider the influence of Boeing on the actions of the FAA or the influence of the nuclear industry on the actions of the NRC.) G. William Domhoff (Who Rules America? Challenges to Corporate and Class Dominance) provided a classic treatment of the influence of corporate and business elites in the sphere of political power in the United States. He has also created a very useful website dedicated to helping other researchers discover the networks of power in other settings (link). Senator Sheldon Whitehouse and Melanie Wachtell Stinnett provide a more contemporary overview of the power that businesses have in American politics in Captured: The Corporate Infiltration of American Democracy.


When I speak of corporate power in politics, let me be very clear: I do not mean just the activities of the incorporated entities themselves. The billionaire owners of corporations are often actively engaged in battle to expand the influence of the corporations that give them their power and their wealth. Front groups and lobbying groups are often the ground troops when corporate powers don’t want to get their own hands dirty or when they want to institutionalize their influence. So-called philanthropic foundations are often the proxies for billionaire families who want influence and who launch these tools. (kl 214)

Contributors to Corporations and American Democracy provide extensive understanding of the legal and political history through which corporations came to have such extensive legal rights in the United States.

Business executives too have a great deal of influence on the Michigan legislature. Here is a Crain's Detroit Business assessment of the top influencers in Lansing, "Michigan's top power players as Lansing insiders see them — and how they wield that influence" (link). Top influencers in the business community, according to the Crain's article, include Dan Gilbert, chairman of Quicken Loans Inc., Daniel Loepp, president and CEO of Blue Cross Blue Shield of Michigan, Rich Studley, CEO of Michigan Chamber of Commerce, Patti Poppe, CEO of Consumers Energy Co., and Mary Barra, CEO of General Motors Co. Most of these individuals are members of the state's leading business organization, Business Leaders for Michigan (link). Collectively and individually these business leaders have a great deal of influence on the elected officials of the state.

Finally, elected officials themselves sometimes act in direct self-interest, either electoral or financial, and corruption is a recurring issue in local and state government in many states. Detroit's mayor Kwame Kilpatrick, a string of Illinois governors, and other elected officials throughout the country were all convicted of corrupt actions leading to personal gain (link).

These kinds of influence and actions underline the extensive and anti-democratic role that a range of political actors play within the decision-making and rule-setting of local government: monopoly-holding political executives, political party officials, big business and propertied interests, labor unions, and special advocacy groups. It would be interesting to put together a scorecard of issues of interest to business, labor, unions, and environmental groups, and see how often each constituency prevails. It is suggestive about the relative power of these various actors that the two issues of the greatest interest to the business community in Michigan in recent years, repeal of the Michigan Business Tax and passage of "Freedom to Work" legislation, were both successful. (Here is an earlier post on the business tax reform issue in Michigan; link.)

Data for case study about networks of influence in SE Michigan

The internal machinations of Michigan's political parties with respect to choosing candidates for office reflect the power of major "influencers". Here is a piece about the choice of candidate for the office of secretary of state in the Democratic Party in 2002: Jack Lessenberry. March 30, 2002. "Austin has uphill fight in Michigan secretary of state race", Toledo Blade (link).