Defining the philosophy of technology 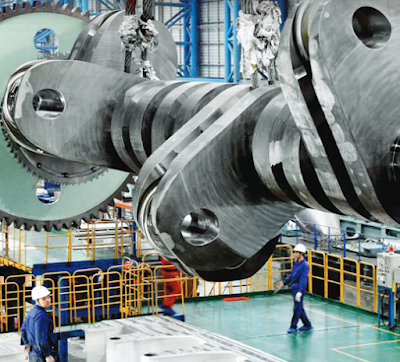 The philosophy of technology ought to be an important field within contemporary philosophy, given the centrality of technology in our lives. And yet there is not much of a consensus among philosophers about what the subject of the philosophy of technology actually is. Are we most perplexed by the ethical issues raised by new technological possibilities -- genetic engineering, face recognition, massive databases and straightforward tools for extracting personal information from them? Should we rather ask about the risks created by new technologies -- the risks of technology catastrophe, of unintended health effects, or of further intensification of environmental harms on the planet we inhabit? Should we give special attention to issues of "technology justice" and the inequalities among people that technologies often facilitate, and the forms of power that technology enables for some groups over others? Should we direct our attention to the "existential" issues raised by technology -- the ways that immersion in a technologically intensive world have influenced our development as persons, as intentional and meaning-creating individuals? Are there issues of epistemology, rationality, and creativity that are raised by technology within a social and scientific setting? Should we use this field of philosophy to examine how technology influences human society, and how society influences the development and character of technology? Should we, finally, be concerned that the technology opportunities that confront us encourage an inescapable materialism and a decline of meaningful spiritual or poetic experience?

The editors summarize the scope of the field in these terms:


The philosophy of technology taken as a whole is an understanding of the consequences of technological impacts relating to the environment, the society and human existence. (Introduction)

As a definition, however, this attempt falls short. By focusing on "consequences" it leaves unexamined the nature of technology itself, it suggests a unidirectional relationship between technology and human and social life, and it is silent about the normative dimensions of any critical approach to the understanding of technology.

Another useful approach to the topic of how to define the philosophy of technology is Tom Misa's edited collection, Modernity and Technology. (Misa's introduction to the volume is available here.) Misa is an historian of technology (he contributes the lead essay on history of technology in the Companion), and he is a particularly astute observer and interpreter of technology in society. His reflections on technology and modernity are especially valuable. Here are a few key ideas:

Technologies interact deeply with society and culture, but the interactions involve mutual influence, substantial uncertainty, and historical ambiguity, eliciting resistance, accommodation, acceptance, and even enthusiasm. In an effort to capture these fluid relations, we adopt the notion of co-construction. (3)


This point emphasizes the idea that technology is not a separate historical factor, but rather permeates (and is permeated by) social, cultural, economic, and political realities at every point in time. This is the reality that Misa designates as "co-construction".

A related insight is Misa's insistence that technology is not one uniform domain that is amenable to analysis and discussion at the purely macro-level. Instead, at any given time the technologies and technological systems available to an epoch are a heterogeneous mix with different characteristics and different ways of influencing human interests. It is necessary, therefore, to address the micro-characteristics of particular technologies rather than "technology in general".

Theorists of modernity frequently conjure a decontextualized image of scientific or technological rationality that has little relation to the complex, messy, collective, problem-solving activities of actual engineers and scientists.... These theorists of modernity invariably posit “technology,” where they deal with it at all, as an abstract, unitary, and totalizing entity, and typically counterpose it against traditional formulations (such as lifeworld, self, or focal practices). ... Abstract, reified, and universalistic conceptions of technology obscure the significant differences between birth control and hydrogen bombs, and blind us to the ways different groups and cultures have appropriated the same technology and used it to different ends. To constructively confront technology and modernity, we must look more closely at individual technologies and inquire more carefully into social and cultural processes. (8-9)


And Misa confronts the apparent dichotomy often expressed in technology studies, between technological determinism and social construction of technology:

One can see, of course, that these rival positions are not logically opposed ones. Modern social and cultural formations are technologically shaped; try to think carefully about mobility or interpersonal relations or a rational society without considering the technologies of harbors, railroad stations, roads, telephones, and airports; and the communities of scientists and engineers that make them possible. At the same time, one must understand that technologies, in the modern era as in earlier ones, are socially constructed; they embody varied and even contradictory economic, social, professional, managerial, and military goals. In many ways designers, engineers, managers, financiers, and users of technology all influence the course of technological developments. The development of a technology is contested and controversial as well as constrained and constraining. (10)


It may be that a diagram does a better job of "mapping" the field of the philosophy of technology than a simple definition. Here is a first effort: 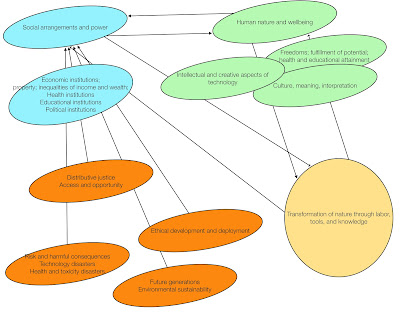 The diagram captures the idea that technology is embedded both within the agency, cultures, and values of living human beings during an epoch, and within the social institutions within which human beings function. Human beings and social relations drive the development of technologies, and they are in turn profoundly affected by the changing realities of ambient technologies. The social institutions include economic institutions (property relations, production and distribution relations), political institutions (institutions of law, policy, and power), and social relations (gender, race, various forms of social inequality). In orange, the diagram represents various kinds of problems of assessment, implementation, development, control, and decision-making that arise in the course of the development and management of technologies, including issues of risk assessment, distribution of burdens and benefits of the effects of technology, and issues concerning future generations and the environment.

The philosophy of technology attempts to uncover the multiple issues raised by "transformation of nature through labor, tools, and knowledge" within the context of large, complex societies. These issues include normative questions, questions of social causation, questions of distributive justice, issues concerning management of risk, and the relationship between technology and human wellbeing.

Let us not forget the emotional durability of design.