Gross inequalities in a time of pandemic 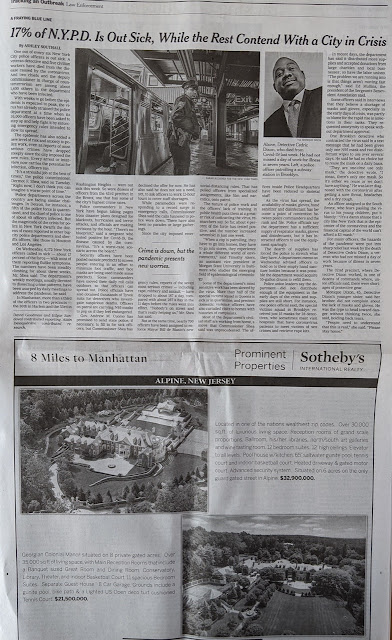 Here is a stunning juxtaposition in the April 2 print edition of the New York Times. Take a close look. The top panel updates readers on the fact that the city and the region are enduring unimaginable suffering and stress caused by the COVID-19 pandemic, with 63,300 victims and 2,624 deaths (as of April 4) — and with hundreds of thousands facing immediate, existential financial crisis because of the economic shutdown. And only eight miles away, as the Sotheby’s "Prominent Properties" half-page advertisement proclaims, home buyers can find secluded luxury, relaxation, and safety, for residential estates priced at $32.9 million and $21.5 million. In case the reader missed the exclusiveness of these properties, the advertisement mentions that they are "located in one of the nation's wealthiest zip codes". And, lest the prospective buyer be concerned about maintaining social isolation in these difficult times, the ad reminds prospective buyers that these are gated estates -- in fact, the $33M property is located on "the only guard gated street in Alpine".

Could Friedrich Engels have found a more compelling illustration of the fundamental inhumanity of the inequalities that exist in twenty-first century capitalism in the United States? And there is no need for rhetorical exaggeration — here it is in black and white in the nation’s "newspaper of record".

There are many compelling reasons that supported Elizabeth Warren’s proposal for a wealth tax. But here is one more: it is morally appalling, even gut-churning, to realize that $33 million for a home for one’s family (35,000 square feet, tennis court and indoor basketball court) is a reasonable “ask” for the super-wealthy in our country, the one-tenth of one percent who have ridden the crest of surging stock markets and finance and investment firms to a level of wealth that is literally unimaginable to at least 95% of the rest of the country.

Here is the heart of Warren's proposal for a wealth tax (link):

Rates and Revenue
Are we all in this together, or not? If we are, let’s share the wealth. Let’s all pay our fair share. Let’s pay for the costs of fighting the pandemic and saving tens of millions of our fellow citizens from financial ruin, eviction, malnutrition, and family crisis with a wealth tax on billionaires. They can afford it. The "65' saltwater gunite pool" is not a life necessity. The revenue estimate of the Warren proposal is roughly proportionate to the current estimate of what it will cost the US economy to overcome the pandemic, protect the vulnerable, and restart the economy -- $3.75 trillion. Both equity and the current crisis support such a plan. 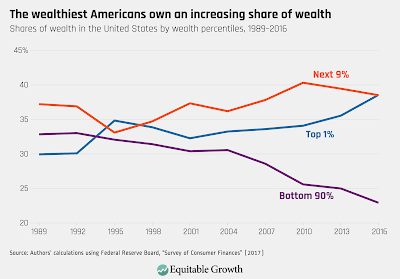 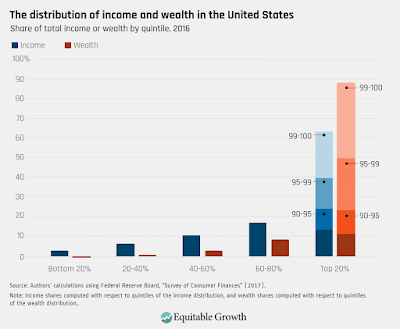 The second graph is a snapshot for 2016 (link). Both income and wealth are severely unequal, but wealth is substantially more so. The top quintile owns almost 90% of the wealth in the United States, with the top 1% owning about 40% of all wealth. 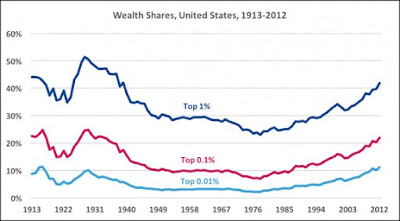 We need a wealth tax, and Elizabeth Warren put together a pretty convincing and rational plan. This is not a question of “soaking the rich”. It is a question of basic fairness. Our economy and society have functioned as an express elevator for ever-greater fortunes for the few, with essentially no improvement for 60-80% of the rest of America. An economy is a system of social cooperation, requiring the efforts of all members of society. But the benefits of our economic system have gone ever-more disproportionately to the rich and the ultra-rich. That is fundamentally unfair. Now is the time to bring equity back into our society and politics. If Mr. Moneybags can afford a $33M home in New Jersey, he or she can afford to pay a small tax on his wealth.

It is interesting to note that social scientists and anthropologists are beginning to study the super-rich as a distinctive group. A fascinating source is Iain Hay and Jonathan Beaverstock, eds., Handbook on Wealth and the Super-Rich. Especially relevant is Chris Paris's contribution, "The residential spaces of the super-rich". Paris writes:


Prime residential real estate remains a key element in super-­rich investment portfolios, both for private use through luxury consumption and as investment items with anticipated long-­ term capital gain, often untaxed as properties are owned by companies rather than individuals. Most of the homes of the super-­rich are purchased using cash, specialized financial instruments and/or through companies, and ‘the higher the price of the property, the less likely buyers were to arrange traditional mortgage financing for the home acquisition. Whether buyers are foreign or domestic, cash transactions predominate at the higher end of the market’ (Christie’s, 2013, p. 14). Such transactions, therefore, never enter ‘national’ housing accounting systems and play no part in many accounts of aggregate ‘national’ house price trends. For example, the analysis of house price trends in the Joseph Rowntree Foundation UK Housing Review is based on data relating to transactions using mortgages or loans, and EU and OECD comparisons between countries are based on the same kinds of data (Paris, 2013b).

Also fascinating in the volume is Emma Spence's study of the super-rich when at sea in their super-yachts, "Performing wealth and status: observing super-­yachts and the super-­rich in Monaco":


In this chapter I focus upon the super-­yacht as a key tool for exploring how performances of wealth are made visible in Monaco. A super-­yacht is a privately owned and professionally crewed luxury vessel over 30 metres in length. An average super-­ yacht, at approximately 47 metres in length, costs around €30 million to buy new, operates with a permanent crew of ten, and costs around €1.8 million per year to run. Larger super-­yachts such as Motor Yacht (M/Y) Madame Gu (99 metres in length), or the current largest super-­yacht in the world M/Y Azzam (180 metres in length) cost substantially more to build and to run. The price to charter (rent) a super-­yacht also varies considerably with size, age and reputation of the shipyard in which it was built. For example, a typical 47-­metre yacht can range between €100 000 to €600 000 per week to charter, plus costs. At the most exclusive end of the super-­yacht charter industry costs are much higher. M/Y Solange, for example, is an 85-­metre newly built yacht (2013) from reputable German shipyard Lürssen, which operates with 29 full-­time crew, and is priced at €1 million plus costs to charter per week.  The super-­yacht industry is worth an estimated €24 billion globally (Rutherford, 2014, p. 51).