Mass murder in the borderlands 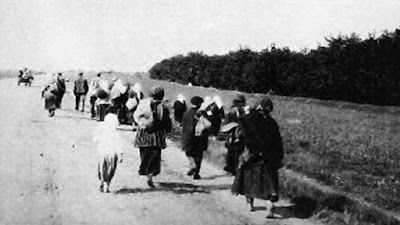 The facts of mass murder in eastern Europe in the 1930s through the 1950s are simply too horrific to fully absorb. These decades include the mass killings of millions of Jewish men, women, and children by the Nazi state and military and their collaborators in territories they conquered in eastern Europe -- the Holocaust. And they include the murder by Stalin and the deliberate policies of the Soviet state of further millions of peasants, Poles, and other ethnic minority populations in Ukraine, Belarus, and the Baltic states -- the Holodomor. Anne Applebaum's recent Red Famine: Stalin's War on Ukraine chronicles Stalin's war of starvation against the small farmers of the Ukraine and the deaths by hunger of almost four million people, the Holodomor. Applebaum's Gulag: A History provides a vivid and horrific account of the story of Stalin's prison camps and labor camps where his regime sent millions of "class enemies" to labor and often to die (link).


The main methodology employed in this study can be dubbed 'integral' -- namely, it neither attempts to provide a detailed description of each borderland region, nor to illuminate all political and socio-economic changes that transpired in the borderlands as a whole. Rather it intends to create a larger synthetic narrative and analytical framework that encompasses all the borderlands as a specific region, giving it the appearance of a particular zone, within a specific time-frame and across whatever arbitrary and usually quite provisional international borders that had been determined by external or internal forces. (7)

Thus Prusin (like Snyder) defines his subject matter as a region rather than a nation or collection of nations. The national borders that exist within the region are of less importance in his account than the facts of ethnic, religious, and community disparities that are evident across the region. He chooses the concept of "borderlands" to capture the region he treats.


The term 'borderlands' here is applied in a geographical rather than in an ethnographic sense and implies as a spatial concept, a zone of overlapping, co-habitation, and contact between different polities, cultures, and peoples. In comparison, the more ideological term 'frontier' would denote a fluid zone within or outside of the state-organized society, even if bounded by clearly marked political boundaries. (10)

By the turn of the twentieth century approximately 16,352,000 people lived in the borderlands, including 10,809,000 on the Russian and 5,542,000 on the Austro-Hungarian side of the border. Situated on the fringes of the empires, the borderlands were 'incomplete societies', where modernity coexisted with the outdated socio-economic structures and socio-economic inequalities coincided with ethno-cultural categories, often defined in terms of religion. (38)

Snyder emphasizes the breakdown of state institutions in these "borderland" nations as a crucial determinant of the regimes of mass killing that ensued. Prusin too looks to the states -- Germany and the USSR -- and argues that these states, and their leaders and bureaucracies of killing, were the "main instigators of violence". The two views are complementary: when intact, state institutions in Ukraine, Poland, or Lithuania had some autonomous ability to subvert or ignore the murderous policies of the Nazi and Soviet states. Once destroyed, the local impulses of lethal anti-Semitism and the organized strategies of the German military occupiers spelt doom for millions of Jews and other victims.


The Soviet and German rule in the borderlands followed the same methods of eradicating 'class-enemies' or the racially 'inferior' ethnic groups. Both states greatly facilitated internal conflicts by encouraging latent hostilities and creating an environment in which inter-communal violence was conceived as a legitimate means and could assume a genocidal character. This study, accordingly, accentuates the role of the state as the main instigator of violence. (Prusin, 5) 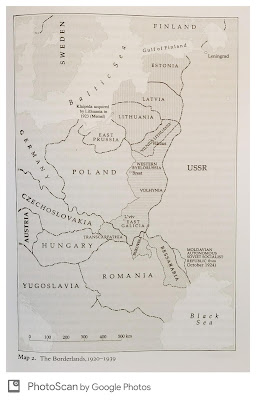 Snyder's map of the bloodlands picks out essentially the same region as the "borderlands" delineated by Prusin. 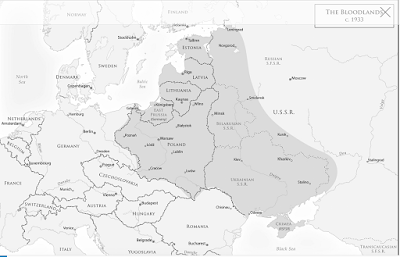 Prusin gives a great deal of attention to the ethnic groups and relationships (as well as antagonisms) that existed across each of the national jurisdictions of these borderland nations ("the amazing heterogeneity of the borderlands"; 15), as well as the empires (Russian and Austrian, and earlier, the Ottoman) that dominated the region for a century prior to the shattering associated with the end of the Great War into the 1930s. Prusin finds that the borderlands were exceptionally violent when it came to war and largescale conflict:


The frontier wars displayed the appalling combination of extreme violence such as pogroms, massacres, the murder of prisoners of war, and collective reprisals. Violence thrived within and without clear ideology foundations and it was committed in the name of ideology as well as base human instincts. Its most disturbing aspect, and arguably its most profound cause, was that in many instances the state structure ceased to exist. (87)

Mass killings and pogroms were familiar in the borderlands. But the German invasion of the USSR in June 1941 led to killings of many groups, including especially Jews, on a huge scale.


Since the mechanisms of the Holocaust in the different regions of the borderlands are discussed in numerous studies, this chapter focuses on the attitudes of the local population towards the situation of the Jews.... Local volunteers constituted a fraction of the populations in which they lived, but their involvement cut across social status, educational level, creed, and age, and entailed a variety of motives. While the political aspirations of the nationalist groups that were particularly active in the initial stages of the war diverged from the Nazi ideological objectives, their interests effectively converged in the elimination of the Jews as ideological enemies or socio-economic rivals. (150)

Writ large, Prusin's account of German invasion and occupation mirrors that of Jan Gross in Neighbors: The Destruction of the Jewish Community in Jedwabne, Poland (link). He notes, for example, that the mass executions of prisoners and class enemies committed by the Soviets as they retreated in face of the German armies were attributed to the Jews, and led to horrific reprisal mass killings of Jews. Prusin believes that the massive killings of Jews that occurred in the region were the result of the intersection of Nazi strategic aims (elimination of the Jews) and local antagonisms towards the Jewish population in these countries that could be triggered into a frenzy of mass killings.


It can be argued, however, that the combination of these factors was at the core of the pogroms. Since the annihilation of Jews was inseparable from the Nazi military and ideological preparations for the war, the invasion of the Soviet Union created a particularly murderous environment -- aptly named the 'Jedwabne state' by a prominent Polish historian -- whereby anti-Semitism and anti-Jewish violence were officially structured and integrated into the emerging pattern of the Holocaust. Where the Germans and Romanians did not partake directly in the pogroms, they acted as organizers and overseers, guiding and encouraging native-driven violence as long as it was directed against the specific target -- Jews. (154)

The initial period of "spontaneous" attacks on Jewish communities was followed in areas of Nazi occupation with organized systems for mass killing. These systems depended upon German leadership and organization, but also depended on large numbers of local volunteers who populated units assigned to eliminating Jews.


With the front moving eastward, the offices of the security and the Order Police commanders oversaw the reorganization of the native police forces that were to be deployed for regular duties, anti-partisan operations, and ultimately for the liquidation of Jews.... The constant shortage of German manpower was but one problem that the native auxiliaries helped resolve. As important was their ability and willingness to carry out the murder of thousands of men, women, and children, at least partially reducing the psychological stress and physical fatigue endured by the German police and security functionaries deployed in carrying out such tasks. Indeed, in any place where the 'Final Solution' was carried out, the role of the native policemen was crucial.... Some of the native police details smoothly mutated into proficient and zealous killing squads such as the notorious Arājs commando, which drove through Latvia and murdered at least 26,000 Jews." (169-170)

There is one striking topic where Prusin's book differs from Snyder's Bloodlands: the mass starvation in Ukraine in 1932-33 created by Stalin as a way of destroying "class enemies of the Soviet state" -- the Holodomor. This is a central topic in Bloodlands, but it receives no meaningful treatment in The Lands Between. Why is this? It seems as though it is a result of the way that Prusin defines his topic. Prusin's book addresses mass killing in the borderlands region; but its primary focus is on mass-killing and extermination as policies by states at war. Prusin provides detail about the wartime policies and actions of the Nazi military and the Soviet Union and Red Army in its treatment of the peoples of the Baltics, Ukraine, Poland, and the other parts of this tormented region, but the internal use of mass killing through starvation by Stalin is not part of his definition of the scope of the book -- apparently because at the time of this event, the people and territory were part of the Soviet Union. Prusin refers to a later period of famine in Ukraine caused by German military commanders (166), but he refers to the much larger Soviet famine of 1932-33 in just a single sentence: "By controlling food supplies, the state had at its disposal a powerful weapon to combat potential resistance, and in the early 1930s the Soviet government demonstrated its willingness to use this weapon to starve millions to death" (215). Here is a map of the extent of starvation in 1932-33: 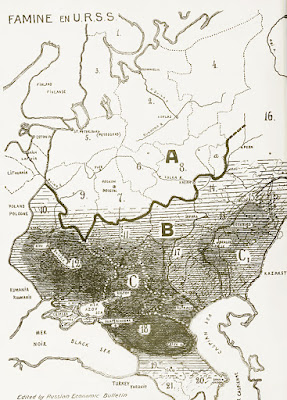 The omission is perplexing. This region falls squarely within the borderlands that are the focus of Prusin's book. So why was it not part of the story that Prusin tells? Apparently simply because it was at that time a part of a powerful nation, the USSR, and not the result, directly or indirectly, of inter-state war. Ukraine was no longer a borderland but a national possession.

Prusin's book is an important contribution, and it is a good complement to Snyder's Bloodlands. In a very real sense each book sheds light that the other does not choose to discuss at all.


In the words of a prominent Soviet theoretician, Nicholai Bukharin, "however paradoxical it sounds, proletarian oppression (принуждение) in all its forms from executions to forced labour, is a method of the separating and forging the communist humankind from the capitalist epoch." (141)

So tovarishch [comrade] Bukharin, you pronounced your own death sentence under the banner of принуждение ... a term that is also translated as compulsion, coercion, constraint, duress, and forcing. In Moscow 1938 it meant a bullet in the back of the neck (link).