A brief Senecian reflection on the humble kidney stone 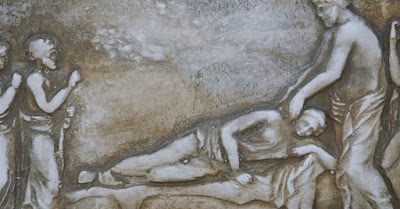 A kidney stone is an affliction. It is a source of pain, it makes sleep impossible, it is a misery that makes thought about anything else impossible. And its treatment is ... dramatic. It is just the kind of life situation we humans are subject to. But we might shrug it off when it's all over -- it was just an illness, an incident in life's long and fascinating series of disasters and joys.

It is worth thinking about the situation of the kidney stone a little more deeply. A kidney stone is often also a manifestation of lifelong habits, ways of daily living. Drinking too much coffee, drinking too little water every day -- the slow invisible accumulation of calcium deep within the body, until it has the mass needed to block the flow of the body's fluids and cause insistent pain. This is a disease (sometimes anyway) that stems from habit; it is not mere fate or inexplicable affliction. Live right and you won't have a kidney stone -- or at least you'll be less likely to do so.

And yet, for many of us -- even knowing the connection between these simple habits and the possibility of pain and suffering in the future -- we fail to adjust our habits. We continue, perhaps reasoning that each day's 24 ounces of water rather than 64 will, by itself, cause no appreciable harm. It is a bodily tragedy of the commons. We are not very rational when it comes to calibrating everyday risks and longterm suffering. And the microscopic condensate deep in the kidney grows over time. I suppose the 8 mm. stone that suddenly causes blockage and pain and needs treatment took several years of silent accretion to become a risk; but it was forming throughout all that time.

I don't know enough about the history of ancient medicine to be sure, but I doubt there was any effective way of addressing a kidney stone in the time of Seneca. Extended suffering and relatively quick necrosis of the kidney were the path forward; and the consolation of philosophy offered by Seneca is familiar. It is the counsel of courage and endurance:

Nor am I so mad as to crave illness; but if I must suffer illness, I shall desire that I may do nothing which shows lack of restraint, and nothing that is unmanly. The conclusion is, not that hardships are desirable, but that virtue is desirable, which enables us patiently to endure hardships. (Letters from a Stoic, book 67)

There are two bits of philosophy that the fact of kidney stones in a human being suggests. First is the Seneca observation, that malady and misfortune are inevitable in life, and one must be prepared to face them with a degree of equanimity. "Fate will not spare you." But the other bit is also important, and in my mind is more associated with the ideas about rationality over time offered in Aristotle's Nichomachean Ethics. The happy person is the person who has orchestrated his or her life activities, from day to day, in ways that contribute to longterm wellbeing. Happiness means making choices on a daily basis that are guided by virtue and one's fundamental values and goals. Translating this idea into the current context, a rational person will think carefully about his or her daily habits and the contributions they make to wellbeing or illness in the future. Drink more water, and no more akrasia!