A topology of political theories?

We sometimes think of political philosophies as falling on a spectrum from left to right. Bernie Sanders is on the left and Greg Abbott is on the right. Our mental map might perhaps look something like this:

(Please note that the graphs are easier to see if the reader clicks the image and views the full-resolution image.)
However, a moment's reflection shows that this scheme doesn't really work. There isn't a single dimension along which these various political philosophies can be arranged. Anarchism isn't just further out on the same dimension as liberal constitutionalism; rather, it highlights a different set of moral concerns altogether. Communitarianism is a complex of values that appeals, in different ways, to both progressives and conservatives. Is communitarianism a left-leaning or a right-leaning philosophical position?
We might say as a form of shorthand that classical liberalism gives highest priority to the rights and freedoms of individual citizens; classical conservatism gives highest priority to the continuity of traditional social and political values and relationships; socialism gives priority to bringing about the end of economic domination of one group by another (equality); and fascism gives priority to ideological purity and state control of society. This shorthand gives a sense of the multi-polar nature of political philosophy.
Consider a handful of fundamental values or themes that have motivated important schools of political philosophy -- for example, the values of liberty, equality, community, state supremacy, and ideological unity. How do the eleven political philosophies mentioned on the left-right spectrum above relate to those values? Here is an impressionistic graphic that perhaps sheds some light on the "space" of political philosophy. The core values of liberty and equality do a reasonably good job of differentiating between the "left" end of the spectrum from the right end. The values of ideological supremacy and state supremacy capture theories at both extremes: communism in the Stalinist mode and fascism. The value of community seems to be invoked in theories on both the left and right halves of the spectrum. 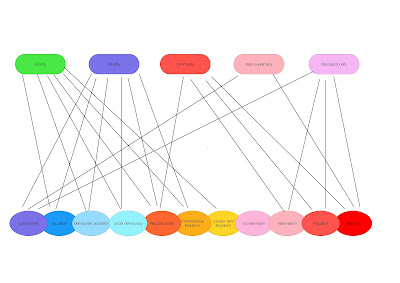 Can we do even better? We might consider placing political philosophies on a more notional graph that flags each political theory with a tag for the values it incorporates. This might look something like this: 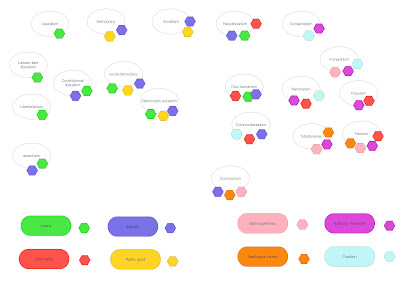 This graph gives a greater sense of the nuances and divisions that distinguish the various political philosophies mentioned here; some are more similar to others because they share more of the "tags" that characterize them, and yet they differ in incommensurable ways. Here again, the left-right spectrum doesn't work well; rather, there is a multi-dimensional scattering of political philosophies across the values of equality, liberty, tradition, state domination, etc. Communism and fascism wind up looking like cousins, not extremes at opposite ends of the spectrum.
It should be possible to incorporate the relationships indicated in the preceding graph into a network graph among the eleven political theories mentioned here. The graph might look something like this: 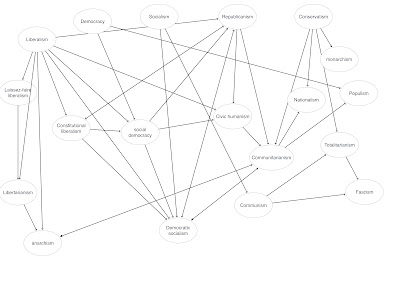 This graph is still impressionistic, but it has a credible logic to it. It seems to capture real affinities among a range of political philosophies. And, most interestingly, it seems to give rise to a very different arrangement of views across conceptual space. The centrist views on this scheme are social democracy and civic humanism, whereas the extreme views are totalitarianism and populism, as well as libertarianism and anarchism.
Having spent several hours exploring different ways of "graphing" the space of political philosophies, I'm inclined to think that this is a useful tool for exploring the underlying commitments of various political theories. The multiple values and fundamental questions posed by Locke, Rousseau, Mill, Marx, Hayek, or Nietzsche do not reduce to a simple set of propositions. But by examining the cross-connections that exist among these various theories we can see both areas of consensus and difference among the theories. And we can see why the theories associated with totalitarianism, fascism, and communism, are so fundamentally unacceptable to a broad range of political thinkers. They are incompatible with the values of individual rights and liberties, the value of human equality, and the aspiration to human progress.
Posted by Dan Little at 7:38 PM

Email ThisBlogThis!Share to TwitterShare to FacebookShare to Pinterest
Labels: CAT_progress

Cool! This blog stimulates my imagination re-networking opposite schools in social thories.

It would be great to be able to see these diagrams with readable labels. I’d love to connect this thinking to othee related work, but without readable labels that aint’t going to happen.

Hello, Andrew, you can click on the image and get a full-resolution version which is fully legible. I'm sorry the presentation version is not legible. I think you'll find what you're looking for by way of labels.