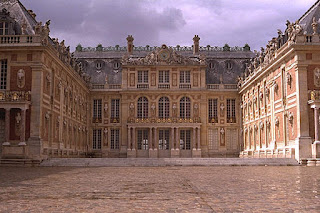 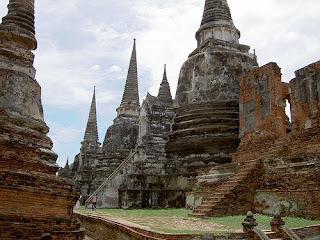 ). Besides offering a highly expert history of Burma and its many kingdoms between 800 and 1830, Lieberman poses a fascinating and novel question: how can we explain the substantial historical parallels that existed between Burma and various parts of Europe, including especially France and Russia? He writes:

In fact, in mainland Southeast Asia as well as in France, the late 18th and early 19th centuries ended the third and inaugurated the last of four roughly synchronized cycles of political consolidation that together spanned the better part of a millenium. (2) 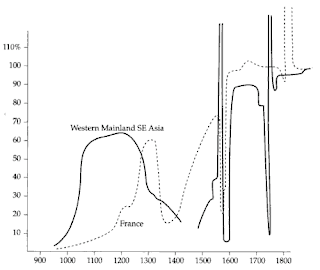 The figure illustrates the kind of synchrony that Lieberman is highlighting -- over a sweep of some thousand years, there is a rough-and-ready correspondence in the patterns of territorial consolidation that existed in Burma and France.

Lieberman poses the crucial historical question in these terms: "Why should distant regions, with no obvious religious or material links, have experienced more or less coordinated cycles? If we discount coincidence, what hitherto invisible ties could have spanned the continents?" (2)

Apriori there appear to be only a small number of logically distinct possibilities that could explain the fact that patterns of variation are synchronized between A and B. (1) It may be that there is a causal linkage from A to B such that A's variations stimulate subsequent variations in B. (2) It may be that there is a common cause C whose variation simultaneously causes variation in both A and B. Global climate variation might be such an example. (3) It may be that both A and B are running through their variations according to the same internal clock, with the result that their variations are synchronized without causal interaction -- like two clocks ringing out the hours in tandem or two adolescent children going through roughly the same developmental stages at roughly the same time. (4) It may be that the observed synchrony is simple coincidence, with no causal explanation whatsoever.

So far as I can see, this exhausts the logical possibilities; there is no fifth possibility.

To further complicate the picture, Lieberman points out that there were other regions of the world where these patterns of consolidation did not occur, or did so on a very different timeline. So we can exclude the idea that there was some common global cause leading to simultaneous pulses of consolidation; rather, Southeast Asia and Western Europe were synchronized, but India was not.

Lieberman's explanation of this observed historical synchrony goes along these lines. He believes that both internalist and externalist approaches have a role to play. The internal historical dynamics of the state systems in Burma and Western Europe were governed by particular local factors. But they each created a tendency towards consolidation of land and power. And external factors provided periodic "pulses" that served to synchronize these internal patterns of development. So the effects of an external factor -- maritime trade -- pushed both Western Europe and Burma into extended periods of state formation and consolidation. This story combines (3) and (2) above: local processes that are developing according to their own imperatives, and occasional system-wide pulses that bring these local processes into synchrony. And the explanation allows Lieberman to place the intellectual frameworks of both Tilly and Wallerstein into the story.

Lieberman's approach is important for the philosophy of history because it leads us to ask different questions about historical causation and historical time. And it provides important new thinking about how to approach the nexus between regional history and global history.

About this issue, systems theories will investigate the dynamical forces that forge the similar social patterns of Burma and France. In 99% probability, their forces must be totally different as they have totally different natural and cultural environments. But these differences will not hinder the possiblity that they could have similar social structures at all from the perspective of systems theories.

Another issue that systems theories want to investigate is why their social structures or norms deviate from each other after their parallel time ended, because system theories care about those social random flunctuations that might trigger social structure reformations.

Systems theories want to reach a higher level of perspective than that of causality because there are so many causal loops connected one another like numerous neurons connected in a human brain.

Systems theories could solve the conflict between causality and randomness, providing us a new perspective to rethink and reexplain our history.