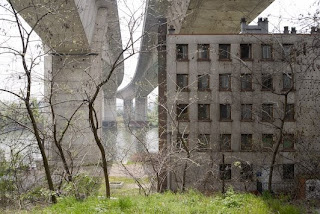 The mix of race, poverty, and urban space has created intractable social issues in many American cities in the past sixty years. Residential segregation creates a terrible fabric of self-reproducing inequalities between the segregated group and the larger society -- inequalities of education, health, employment, and culture. As intractable as this social system of segregation appears to be in the cities of the United States, it may be that the situation in France is even worse. Sociologist Didier Lapeyronnie is interviewed in a recent issue of the Nouvel Obs on the key findings of his recent book, Ghetto urbain: Segregation, violence, pauvrete en France aujourd'hui. The interview makes for absorbing reading.

Lapeyronnie is an expert on urban sociology, poverty, and immigration in France and a frequent observer of the rising urban crisis in France. (I'm deliberately evoking here the title of Tom Sugrue's book, The Origins of the Urban Crisis: Race and Inequality in Postwar Detroit.) Lapeyronnie's view is grim: the isolation and despair characteristic of French ghetto and banlieue communities are worsening year after year, and the French state's promises after the disturbances of 2005 have not been fulfilled. Unemployment, limited educational opportunities, and poverty create an environment in which young people have neither the resources nor the opportunities to improve their social position, and they are largely excluded from the larger French society.

Lapeyronnie offers several important observations. These ghettos are largely populated by immigrant communities -- first, second, or third-generation immigrants from North Africa and former French colonies. Racism is a crucial element in the development and evolution of these segregated spaces. As he puts it:

The ghetto is the product of two mechanisms: social and racial segregation and poverty, which enclose people in their neighborhoods, leading to the formation of a veritable counter-society with its own norms, its economy (what one calls the black economy), and even its own political system. ... Poor and segregated, feeling ostracized by the Republic and plunged into a veritable political vacuum, they have organized a counter-society which protects them even as they are disadvantaged in relation to the exterior world.

Lapeyronnie makes the point that the development of segregated ghettos is more advanced and more harmful in the smaller cities of France. He describes the situation in these smaller cities as creating an almost total barrier between the ghetto and the surrounding city -- an environment where the possibility of economic or social interaction has all but disappeared.

Lapeyronnie notes the role that gender plays in the segregation system. Women of the ghetto can move back and forth -- if they accept the "dominant norms" of dress and behavior. And this means the head scarf, in particular. In order to pass across the boundary of ghetto and city, women must adopt the dress of non-Muslim French society. But, as Lapeyronnie points out, this creates a deeply ambiguous position for women, because modest dress and head scarf are all but mandatory within the space of the ghetto. "The veil is interpreted as a sexual symbol, affirmation of a sexual solidarity with Muslim men. It often engenders hostility outside the ghetto while providing protection within the ghetto." "Here one finds one of the central explanations of the formation of the ghetto ... which is organized around the articulation of the race of the men and the sex of the women."

Another interesting sociological observation concerns the nature of the social networks within and without the ghetto. Lapeyronnie distinguishes between "strong network ties" (liens forts) and weak network ties (liens faibles), and he asserts that social relationships in the ghetto fall in the first category: everyone knows everyone. As a network diagram, this would result in a dense network in which every node is connected to every other node. But Lapeyronnie makes the point that weak networks are a source of strength and innovation in the larger society that is lacking in the ghetto; people can "network" to strangers through a series of connections. So opportunities are widely available -- finding a job by passing one's CV through a series of people, for example. "Strong networks protect people, they are like a cocoon ... But they are also a handicap and a weight on each person. Not only is the individual deprived of resources, but many people don't know a single person outside the neighborhood." Moreover, this strong network characteristic is very effective at enforcing a group morality (along the lines of Durkheim): "There is a morality and set of norms in the strong network: don't betray, be faithful to one's friends, stay together."

Lapeyronnie concludes the interview with these words:

When a population is placed in a situation of poverty and lives within racial segregation, it returns to very traditional definitions of social roles, notably the roles of family, and on a rigid and often bigoted morality. This is what permits building the strong network.

This is a pretty powerful analysis of the social transformations that are created by segregation, racism, isolation, and poverty -- and it doesn't bode well for social peace in France. Lapeyronnie is describing the development of an extensive "counter-society" that may be more and more important in coming years. The social networks and social relationships that Lapeyronnie describes are a potent basis for social mobilization and new social movements, and there don't seem to be many pathways towards social progress to which such movements might be directed.
Posted by Dan Little at 12:31 PM

There is a much longer interview with video over at nonfiction.fr.

France will have to pay this soft coco channel" sponsored segregation's system, sooner or later. but it 's goona hurt badly. The so called white-piggy asses french elite knows that and wishes for it from the bottom of their dead heartz and sick soulz; they are sponsoring the clashes to come and of course that would be labelled as the obvious mark of the impossible "integration" of those doomed eternal savages, meaning niggers and sand niggers in France.

The system is as follow: We command you to be like us (the "french culture") but you could never be with us. And by the way, no matter how hard to be like us, it is upon us to decide if you succeded in this quest or if you still have to do progress

The system is a perpetual scam.


Continue starving those dogs, you won't know when they will bite and what part of the body they will end up reaping and tearing.

from a sand nigger in France