Works councils and US labor relations 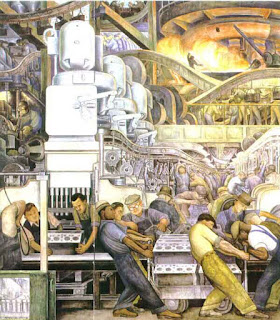 image: Diego Rivera, Rouge Plant mural, Detroit Institute of Arts
The United States has one of the lowest rates of union representation of all developed countries. The 1994 level of unionized workers in the US had fallen to about 12 percent of private sector employment, and the trend is downward.  And the sole institutional form through which representation occurs in the US context is the union.  So the vast majority of American workers are left with no formal representation within the firm when it comes to wages, benefits, or work practices.
This situation contrasts strikingly with the labor-management institutions in place in much of Europe and Japan. In most other countries legislation establishes the opportunity or the mandate for a second form of worker representation within the workplace, the works council. Industry-wide unions establish wage levels; public policy stipulates the level of the "social wage"; and works councils provide an institutionalized context in which management and employees consult with each other, exchange workplace information, and work out firm-specific implementations of industry-wide agreements.  And, as Kathleen Thelen demonstrates, differences in the institutions surrounding labor in a market society can have major effects on important social and economic factors in the societies in which they are embedded (How Institutions Evolve: The Political Economy of Skills in Germany, Britain, the United States, and Japan

is the result of an extensive NBER cross-country study of the economic and social effects of broadly implemented works councils in Europe and Japan. The bottom line is fairly clear: where they exist, these formal institutions of labor representation within the firm have clear theoretical and empirical benefits for productivity, worker skill levels, and willing patterns of cooperation between workers and management. (Richard Freeman's America Works: Critical Thoughts on the Exceptional U.S. Labor Market

(2007) is a more general discussion of the singular nature of the American labor system.)
Generally speaking a works council system can be defined in these terms:

We define works councils as institutionalized bodies for representative communication between a single employer ("management") and the employees ("workforce") of a single plant or enterprise ("workplace"). (Rogers and Streek, 6)

This involves several aspects:
The benefits associated with works councils in Europe and Japan are many and well documented  More specifically, the contributors found that works councils facilitate a number of welfare-enhancing outcomes:
Each of these outcomes is a substantial benefit within a market-based economic system. Take the issue of the enforcement of regulations, including OSHA rules, environmental regulations, and food safety assurance regimes. The inspectorate of the agencies responsible for these regulatory regimes cannot be sized to the levels needed to ensure enforcement through inspection and fines. There are simply too many workplaces and firms. And the only other current mechanism, private litigation when violations lead to individual damages, is too sporadic to constitute an effective enforcement regime.  So, for example, workplace accident rates are dramatically higher in the United States than Japan and Sweden; the US death rate is 3.5 times that of Japan and 5.8 times that of Sweden (398).  Works councils specifically empowered to gain knowledge about the regulatory requirements combined with detailed workplace knowledge can change this situation.
Or take the area of a cooperative exchange of information within the firm. When various actors have the opportunity and incentive to hoard information to further their particular interests -- whether management or employee -- then decisions will be faulty, efficiencies will be overlooked, and the production process will be less efficient than it could be. Works councils give employees a greater degree of confidence and trust in management and therefore a greater willingness to share useful workplace information. And management has a legal mandate to share pertinent information and to consult with employees about prospective decisions. These intersecting incentives and obligations promote a valuable cooperative exchange of information.
Richard Freeman and Edward Lazear go into detail in laying out the reasons grounded in microeconomics for expecting that works councils will be welfare-enhancing but need to be mandatory rather than voluntary.  Central to their analysis is the issue of information flow within a firm:

Economic theory recognizes that asymmetries in information between labor and management can produce inefficient social outcomes.  Different levels of a firm's hierarchy can use private information opportunistically, possibly through coalitions against other levels of the hierarchy. ...  Legal requirements that management disclose information to elected works councils raises the possibility that councils may help resolve the communication problem and raise rents. (33)

They also emphasize the benefits for quality of decision making that flow from the obligation to consult with employees.  "Consultation can increase enterprise surplus when workers offer solutions to firm problems that management fails to see ... and when management and labor together discover solutions to company problems that neither would have conceived separately" (44).
On first principles it would seem that the US economy would be better served by a system that incorporates works councils as a supplement to union representation. And workers are likely to be benefited in very specific ways --greater satisfaction in the workplace, greater involvement in a high-skills (and high-wage) economy, and a greater level of democratic equality. So what stands in the way of reforms leading in this direction? Joel Rogers considers this question in discouraging detail in the concluding chapter. The foundations of US labor law directly prohibit these forms of workplace representation, and the political will for implementing these policy changes is lacking on both sides. And it is difficult to see a gradual process of evolution in this direction based on voluntary establishment of these institutions by employers; the history of labor relations after both world wars suggest that these forms tend to extinguish when based on voluntary choices by enterprise owners. So it is difficult to see where the political will for this major reform of US labor relations might originate.
There is another consideration that favors the establishment of works councils that is not highlighted in this report -- the terrible situation of workers in the informal sector in the United States. Restaurant workers, day laborers, taxi drivers, non-unionized hotel workers, nannies, and housekeepers have very little ability to protect their interests and defend their legal rights. Health and safety standards apply to informal workplaces; all workers have a right to receive their wages in a timely way; and physical or verbal abuse should not be accepted in any workplace. But informal sector workers have very few means at their disposal to secure their rights in even these basic ways. Often undocumented, always in desperate need for a job, they are often at the mercy of bosses and managers who take advantage of them. There are emerging efforts to create analogs for works councils to help workers in these sectors to defend their rights and their livelihoods.  Intriguing experiments have emerged; for example, Restaurant Opportunity Centers in several cities (link) and Domestic Workers United in New York City (link). See Janice Fine, Worker Centers: Organizing Communities at the Edge of the Dream

.  Here is an extended description of the book (link) and here is a link to her Economic Policy Institute working paper, "Worker Centers: Organizing Communities at the Edge of the Dream".  Also of interest is the website for WorkingAmerica, the policy organization associated with the AFL-CIO.  Progress along these lines would sigificantly improve basic features of social justice in our society.
Posted by Dan Little at 7:46 PM

Here is a commentary by Tom Geohegan from recent issue of Harper's Magazine that discusses works councils in Germany:

Geohegan is a Chicago labor lawyer. He writes well.