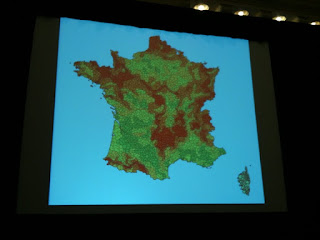 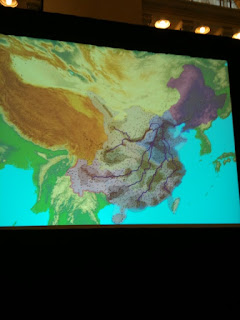 images: presentations of Skinner's data by Center for Geographic Analysis, Harvard University, AAS 2010
G. William Skinner was a remarkably generous scholar who inspired and assisted several generations of China specialists.  (Here is a link to a remembrance of Bill.)  He was prolific and fertile, and there is much to learn from rereading his work. There is quite a corpus of unpublished work in the form of research reports and conference papers.  Rereading this work is profoundly stimulating. It holds up very well as a source of ideas about social science analysis of concrete historical and social data, and there are many avenues of research that remain to be further explored.
Skinner is best known for his efforts to provide regional systems analysis of spatial patterns in China.   He thought of a social-economic region as a system of flows of people, goods, and ideas.  He argued for the crucial role that water transport played in knitting together the economic activities of a region in the circumstances of pre-modern transport.
Skinner's work demonstrated the great value of spatial analysis.  Patterns emerge visually once we’ve selected the appropriate level of scope.  Mapping social and economic data is tremendously insightful.  He was also highly sensitive to the social and cultural consequences of these flows of activity.  For example, patterns of gender ratios show a pronounced regional pattern; Skinner demonstrates the relevance of core-periphery structure to social-cultural variables such as this one.
Skinner plainly anticipated the historical GIS revolution conceptually.  And this is a feature of imagination, not technology.
A classic series of articles on the spatial structure of the Chinese countryside in the 1960s provided an important basis for rethinking “village” society. They also provided a rigorous application of central place theory to the concrete specificity of China.  Here are several maps drawn from these essays ("Marketing and Social Structure in Rural China." Journal of Asian Studies 24 (1-3), 1964-65). Here Skinner is trying out the theories of central place theory, and the theoretical prediction of economic space being structured as a system of nested hexagons with places linked by roads. 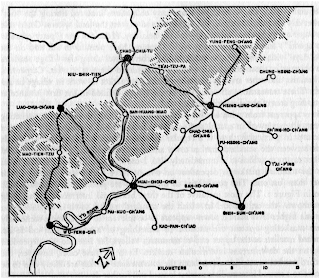 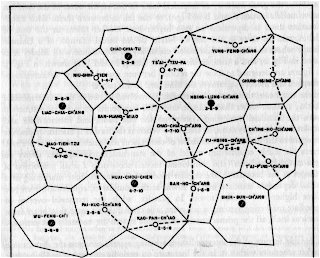 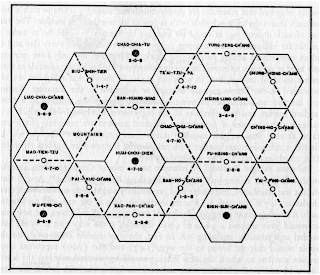 Another key contribution of Skinner's work is his analysis of China in terms of a set of eight or nine “macroregions”.  He argues that China was not a single national economic system, and it was not a set of separate provincial economies.  Instead, it consisted of a small number of “macroregions” of trade, commerce, and population activity, linked by water transport.  And macroregions were internally differentiated into core and periphery.
Skinner used meticulous county-level databases to map the economic and demographic boundaries of the region.  Skinner identified core and periphery in terms of population density, agricultural use, and other key variables.  And he then measured a host of other variables – female literacy, for example – and showed that these vary systemically from core to periphery.  There is also an important ecological dimension to the argument; Skinner demonstrated that there is a flow of fertility from periphery to core as a result of the transfer of food and fuel from forests to urban cores.  (This analysis is developed in "Regional Urbanization in Nineteenth-Century China" in The City in Late Imperial China

, edited by G. W. Skinner, Stanford University Press, 1977.)  Here are three maps developed by Skinner and his collaborators on the basis of the macroregions analysis. 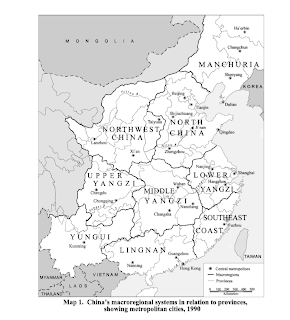 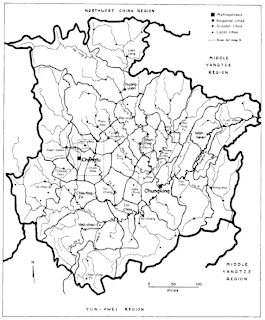 This is a particularly expressive map of the Lower Yangzi macroregion, differentiated into 4 levels of core and periphery.  This is pretty much the full development of the macroregional analysis. 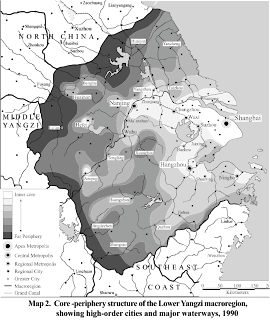 Another key idea in Skinner's work is his analysis of city systems into a spatial and functional hierarchy. He argued that it is possible to distinguish clearly between higher-level and lower-level urban places, and that there is an orderly arrangement of economic functions and marketing scope associated with the various urban places in a macroregion. 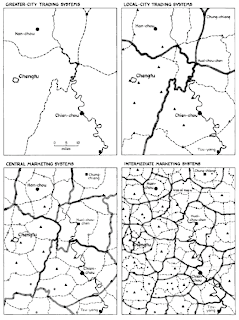 So regional analysis of China is a key contribution in Skinner's work. But Skinner did not restrict his research to China alone. He also did significant work on Japanese demography and family structure and female infanticide in the 1980s (for example, "Reproductive Strategies and the Domestic Cycle among Tokugawa Villagers," an AAS presentation in 1988).
And he brought his regional systems analysis to bear on France in an extended piece of research in the late 1980s. The maps that follow are drawn from an unpublished conference paper titled "Regional Systems and the Modernization of Agrarian Societies: France, Japan, China," dated 1991. This paper builds upon a 1988 paper titled "The Population Geography of Agrarian Societies: Regional Systems in Eurasia."
This analysis builds a view of France as a set of interrelated regions with core-periphery stucture.  Through the series of working maps Skinner painstakingly constructs an empirically based analysis of the economic regions of France in mid-nineteenth century.  And Skinner then asks one of his typically foundational questions: how do these geographical features play a causal role in cultural and demographic characteristics? 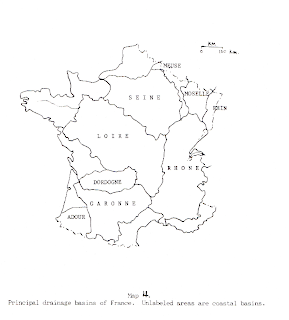 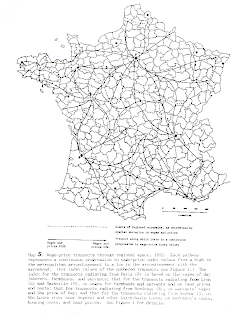 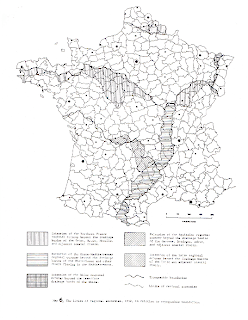 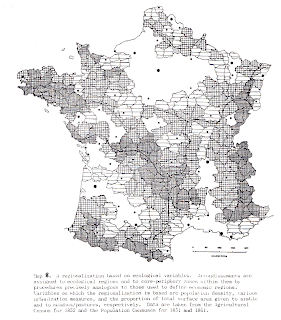 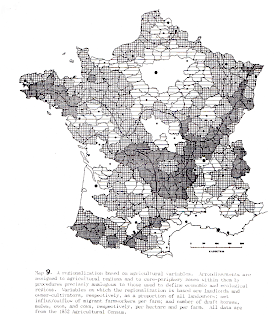 This map of never-married/married female ratios is one illustration of Skinner's effort to relate social, cultural, and demographic variables to the core-periphery structure of a region.  The pattern of high ratio corresponds fairly well across the map of France to the regions identified by demographic and agricultural factors.  And this serves to confirm the underlying idea -- that economic regionalization has major consequences for cultural and demographic behavior. 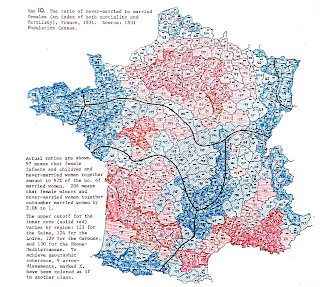 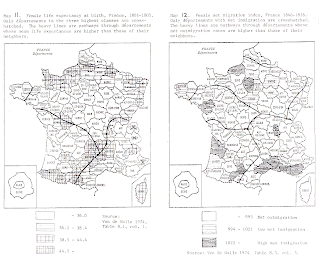 Finally, Skinner also played an important role as a “macro-historian” of China.  His 1985 Presidential Address to the Association for Asian Studies was a tour-de-force, bringing his macroregional analysis into a temporal framework (Skinner, G. William. 1985. Presidential Address: The Structure of Chinese History. Journal of Asian Studies XLIV (2):271-92).  In this piece he demonstrates a “long-wave” set of patterns of economic growth and contraction in two widely separated macroregions.  And he argues that we understand China’s economic history better when we see these sub-national patterns.  He analyzes the economic and population history of North China and Southeast Coast, two widely separated macroregions, over several centuries.  And he demonstrates that the two regions display dramatically different economic trajectories over the long duree.  Skinner brings Braudel to China.
Here is the pattern he finds for two macroregions over a centuries-long expanse of time.  And significantly, if these patterns were superimposed into a “national” pattern, it would show pretty much of a flat performance, since the two macroregions are significantly out of phase in their boom and bust cycles.

Finally, an enduring contribution that Skinner made is his cheerful disregard of discipline. Economic anthropology, regional studies, demography, urban studies, history … Skinner moved freely among all these and more. It was topics and questions, not disciplinary strictures, that guided Skinner’s fertile and rigorous imagination.  And area specialists and social scientists alike can fruitfully gain from continued study of his research.  Fortunately, work is underway to make Skinner's unpublished research and data available to other scholars.  Here are some major projects:
(Presented at the Association for Asian Studies, Philadelphia, March 2010; panel on Skinner's legacy.)
Posted by Dan Little at 4:34 PM