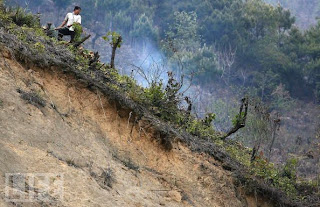 James Scott opens his most recent book with quotations from frustrated pre-modern administrators and missionaries whose territories included the peoples of inaccessible highland regions -- Guizhou, highland Burma, and Appalachia.  Scott finds that the geographical circumstances of highland peoples mark them apart from the political organizations of the valleys; states could control agriculture, surplus, and labor in the lowlands, but were almost entirely incapable of exerting sustained rule in the highlands.  And he finds that highland cultures and systems are more or less deliberately shaped to elude the grasp of the state; linguistic variety, swidden agriculture, and ethnic opacity all work to make the art of rational administration all but impossible.  The book is The Art of Not Being Governed: An Anarchist History of Upland Southeast Asia, and it is a significant contribution to the social and political analysis of very large swatches of the world.  (Here are the table of contents and introduction to Edmund Leach's classic book, Political Systems of Highland Burma: A Study of Kachin Social Structure.)

Scott makes use of the concept of "Zomia" to capture the highland peoples of Southeast Asia.


One of the largest remaining nonstate space in the world ... is the vast expanse of uplands, variously termed the Southeast Asian ma s-si f and more recently, Zomia.  This great mountain realm on the marches of mainland Southeast Asia, China, India, and Bangladesh sprawls across roughly 2.5 million square kilometers -- an area roughly the size of Europe.  As one of the first scholars to identify the massif and its peoples as a single object of study, Jean Michaud has traced its extent: "From north to south, it includes southern and western Sichuan, all of Guizhou and Yunnan, western and northern Guangxi, western Guangdong, most of northern Burma with an adjacent segment of extreme [north]eastern India, the north and west of Thailand, practically all of Laos above the Mekong Valley, northern and central Vietnam along the Annam Cordillera, and the north and eastern fringes of Cambodia." (chapter 1)

Scott estimates the population of the minority peoples of Zomia at 80-100 million.  Here is a map posted by Martin Lewis on GeoCurrents.Info. 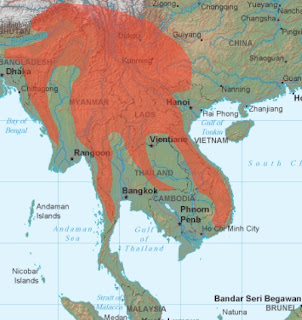 What is intriguing about this definition of space and social reality is that it is not defined by nation-state boundaries and jurisdiction, by linguistic groupings, or by ethnic and national identities.  Scott emphasizes the enormous linguistic and ethnic variation that occurs across this expanse of space.  "In the space of a hundred kilometers in the hills one can find more cultural variation--in language, dress, settlement pattern, ethnic identification, economic activity, and religious practices--than one would ever find in the lowland river valleys" (chapter 1; Kindle location 343).

Two central arguments take up much of Scott's attention in the book.  One is an argument about the logistics of state power in a pre-modern agrarian society.  Essentially he argues that pre-modern agrarian societies were only able to impose their rule over a tight radius of perhaps 300 kilometers, when it came to collecting taxes, grain, and manpower.  Moreover, this radius of power reduced significantly when population was distributed over mountainous country.  So as a practical matter, the pre-modern states of Burma, Thailand, and Cambodia were river-valley states, and the peoples of the highlands were rarely subject to central rule.  This argument resonates with Michael Mann's analysis of pre-modern state power in The Sources of Social Power: Volume 1, A History of Power from the Beginning to AD 1760

.  On this scale, the Kingdom of Chicago would barely be able to exert its will over the peasants of Peoria or Milwaukee; and Indianapolis would be a distant and irrelevant place.


The precolonial state, when it came to extracting grain and labor from subject populations, could project its power only within a fairly small radius of the court, say, three hundred kilometers, and that undependably and only during the dry season. (Kindle loc 610)

And, he argues, the peoples of the highlands deliberately organized their activities in ways that made the power of the state least effective.


Virtually everything about these people's livelihoods, social organization, ideologies, and (more controverially) even their largely oral cultures, can be read as strategic positionings designed to keep the state at arm's length. (Kindle loc 26)

The very diversity, fluidity, and mobility of their livelihoods meant that for an agrarian state adapted to sedentary agriculture, this ungoverned landscape and its people were fiscally sterile. (Kindle loc 217)

The other central theoretical argument that Scott offers concerns the question of ethnicity and identity.  Like Ben Anderson (Imagined Communities: Reflections on the Origin and Spread of Nationalism

), Scott believes that the identities of Burman, Mon, Khmer, Tai, or Shan are constructed identities, not essential or ancient.


Identity at the core was a political project designed to weld together the diverse peoples assembled there. Bondsmen of allied strongmen, slaves captured in warfare or raids, cultivators and merchants enticed by agricultural and commercial possibilities: they were in every case a polyglot population. (Kindle loc 1166)

The central plain of what would become Siam was, in the thirteenth century, a complex mix of Mon, Khmer, and Tai populations who were an "ethnicity-in-the-process-of-becoming" Siamese. (Kindle loc 1172)

The book takes up the argument that Scott began in Seeing Like a State: How Certain Schemes to Improve the Human Condition Have Failed

: that a central task of the state it to render its territory and population "legible".  The state needs to be able to regiment and identify its subjects, if it is to collect taxes and raise armies; so sedentary, mobile, peripheral peoples are antithetical to the needs of the state.  This argument begins in Seeing Like a State; and it gains substantial elaboration here.  And it is a fundamental call for a different approach to conceptualizing and studying the cultures and populations of Southeast Asia: not by ethnic group, not by national boundaries, but rather by the common circumstances of material and political life in high, rugged terrain.

As I've suggested in treating Scott's other contributions to "peasant studies", Scott's work almost always takes the form of an imaginative re-framing of problems that we thought we had understood.  But once looking at the facts from Scott's point of view, we find that the social phenomena are both more complex and perhaps more obscure than they initially appear to be.
Posted by Dan Little at 10:35 PM

Money is hidden overseas to avoid taxation, and corporations are sued in US courts for crimes that they have committed abroad while US politicians can be tried in courts of countries in or to which they committed no offense.
*
US immigration officials now try to apprehend preemptively illegal entrants from outside the borders of the US. So that's another interesting example of extra-territoriality. And the more troubling examples include the secret prisons for those subject to extraordinary renditions and the detention center at Guantanamo.
*
As another example of the normalcy of extraterritoriality, she gave the interesting example of Vicente Fox openly holding a meeting of illegal aliens on US soil (by the way would even the several million illegal immigrants who have genuine connections to US American society get to participate in the original position? And for an interesting moral argument grounded in an impartial spectator who would not share in any contractarian agreement, see Ayelet Shachar's book on the birthright lottery, by which she means that if citizens of wealthy countries are going to continue to restrict citizenship on the grounds of jus sanguinis and/or jus solis, then their citizens will continue to inherit a privilege just as a wealthy heir has inherited an estate and should be taxed accordingly--in this case for global welfare projects.
*
I remember that Maurice Godelier wrote about territory in his book Mental and the Material.

It reminds me of Fernand Braudel in the Mediterranean (Vol 1). Where his first sub-chapter is titled: Mountains Come First: The mountains are as a rule a world apart from civilizations...There history is to have none, to remain always on the fringe of the great waves of civilization...

He even goes on to say: In the mountains then, civilization is never very stable...and...There can be no doubt that the lowland , urban civilization penetrated to the highland world very imperfectly, and at a very slow rate.

I appreciate your post. I have been working with and researching refugees from Burma and building my own understanding of the conflict in there. As well as, learning more about the history and lives of people in Southeast Asia. Reading this post has given me another lens with which to view and understand certain aspects of Burma and SEA. Thanks.

i've heard Zomia(origin Zomi) in the neighbouring state of India and Burma.
Like one of a famous political Party in Burma i.e. ZOMI NATIONAL CONGRESS with its Chairman Chinsianthang.
These people were also termed by the Burmese as Chin and by the British as Kuki. It can be notice in the writing of ZOMI by Carey & Tuck, Dr. Grierson, Dr. Vumson, Dr. Tualchin,etc.