source: The Paretian System (link)
The most vivid part of any undergraduate student's study of economics is probably the diagrams.  Economists since Walras, Pareto, and Marshall have found it useful to express their theories and hypotheses making use of two-axis diagrams, allowing for very economical formulation of fundamental relationships. Supply-demand curves, production functions, and a graph of diminishing marginal product all provide a way of making geometrical sense of a given economic principle or hypothesis.  They allow us to visualize the relationships that are postulated among a set of factors.
Mark Blaug has made a long and fruitful career out of his remarkable ability of placing economic thought into its context (Economic Theory in Retrospect

(1962), The Methodology of Economics: Or, How Economists Explain

(1992)).  Now he has collaborated with Peter Lloyd to produce Famous Figures and Diagrams in Economics

(2010), and the book is a marvelous contribution.
The book is organized into several large sections: Demand and supply curve analysis; Welfare economics; Special markets; General equilibrium analysis; Open economies; Macroeconomic analysis; and Growth and income distribution.  Experts have been recruited to write short, technical but accessible essays on some 58 topics, including discussion of about 150 diagrams.
The figures that the book considers pretty much reproduce the history of modern economic thought.  And, indeed, some figures have been repeatedly rediscovered; Blaug attributes the "Marshallian cross" to Cournot (1838), Rau (1841), Dupuit (1844), Mangodt (1863), and Jenkin (1870).  Almost all the examples are drawn from the history of orthodox neo-classical economics; rare exceptions are Joan Robinson's "graph of discrimination" and August Losch's "market areas".  The main insights of classical economics are equally amenable to presentation through diagrams, so it is interesting that the classical economists (including Marx) were not particularly inclined to use them.  Here is a diagram not included in the book, representing Michio Morishima's effort to express some of Ricardo's central economic intuitions: 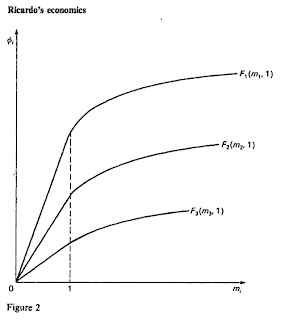 , p. 38
It is worth thinking a bit about what a diagram is, from a cognitive point of view.  To start, it is not a data graph; a diagram does not generally provide a summary of actual economic variables over time, such as unemployment.  But generally an economic diagram is not simply a graph of a given mathematical function either, plotting the value of a function over part of the domain of the independent variable.  We need more than a graphing calculator to create a useful economic diagram.
Rather, an economic diagram is a stylized representation of the behavior and interaction of (often) several variables in a range of interest.  Take the most fundamental diagram of neoclassical economics, the supply-demand diagram.  We are asked to consider "supply" and "demand" over a range of "price".  One curve represents the quantity of the good that will be produced at a low price through high price; the other curve represents the quantity of the good that will be purchased at the range of prices.  The intersection of the curves is the point of interest; it is the equilibrium at which quantity demanded equals quantity supplied.  The shape of the curve is significant; a straight line represents the view that supply and demand are linear with respect to price, whereas a curved line represents a non-linear relation between quantity and price.  (Each increment in price stimulates a smaller change in quantity.)
Here are some of the uses of diagrams in economics that Blaug and Lloyd mention in their introduction:

They go on to quote Marshall:

It happens with a few unimportant exceptions all the results which have been obtained by the application of mathematical methods to pure economic theory can be obtained independently by the method of diagrams.  Diagrams represent simultaneously to the eye the chief forces which are at work, laid out, as it were, in a map; and thereby suggest results to which attention has not been directed by the use of methods of mathematical analysis. (5)

We might imagine that economic diagrams are purely mathematical constructs, and we might suppose that we have little choice in the way that a diagram is constructed.  But Edward Tufte has quite a bit to say on this subject in a series of books beginning with The Visual Display of Quantitative Information

.  Essentially Tufte's message is that quantitative ideas can be conveyed in better and worse ways, and that much of the communication we do about quantities is misleading.  Conveying a quantitative relationship through a diagram can be done more or less insightfully; it is up to the economist to find a concise way of representing the relationships he/she is interested in exploring. 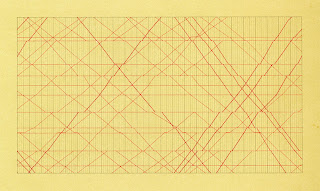 Blaug and Lloyd take some note of the "presentation aesthetics" of economic diagrams when they discuss modern methods of presentation:

In many areas of economic theory, the way in which economists understand economic concepts and propositions is through figures and diagrams.  What teacher of economic theory has not seen the dawn of understanding come over students when, failing to understand an exposition of some complex model in algebra or calculus, they are presented with a simple illustration? ...

One can comprehend relationships among a number of variables (as in the box diagrams) or the effects of shifting curves or multiple equilibria more readily than in the corresponding algebra. This advantage has been increased by modern technologies.  Textbooks today use multi-coloured diagrams to great effect and the delivery of diagrams in classroom from computer-based programs allow overlays and other graphical techniques that aid the exposition of complex ideas. (8-9) 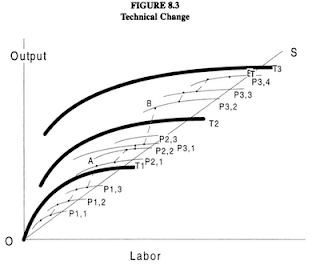 This diagram represents several different kinds of historical change in one compact figure: gradual technical progress along a production curve, shift of production curves through technical innovation, and the maximum production possibility curve that lies above each of these.  The axes represent "total output" and "rural population." The concave shape of each curve has a very specific economic and demographic meaning: as population grows within a given mix of techniques, output grows more slowly; so average output per capita approaches the subsistence line OS.  The HLET is graphically and laconically indicated on the upper right quadrant of the graph; there is no further room for technical improvement, and population has increased to the point where there is no surplus to fund radical technological innovation.  (Elvin's theory of the high-level equilibrium trap is discussed in my Microfoundations, Methods, and Causation; link.)

Email ThisBlogThis!Share to TwitterShare to FacebookShare to Pinterest
Labels: CAT_methodology

We can make an argument that my first critique is because we're dealing with a social science. Social scientists' graphs show only correlation, so the graphs, by themselves, do not make claims about causation. If we accept that argument, then it does not matter which variable is on which axis since neither is explanatory or dependent. I don't find this explanation satisfying, but it could work.

To my second point, look at any supply and demand graph. Price is always on the y-axis! And you will not find any economist who says that quantity drives demand and supply. The theory is that a high price means high supply and low demand, and vice-versa for a low price. Therefore, price drives demand and supply. Everyone is taught, however, to read graphs as y(x), that is the x-axis drives the y-axis. So a tyro sees the graph and reads price(supply,demand). It takes a lot of time and confusion to learn to interpret a supply and demand graph. Worse, the graph's power would not be lost if quantity was put on the y-axis.

The other graph that comes to the top of my head is labor supply, which is the same as a supply curve except it bends over on itself at a high enough price. Again, the independent variable is put on the y-axis. Does anyone know why economists do this?

Wonderful post! With reference to Zack's question, this is something Mark Blaug himself has discussed:

"Cournot, following standard mathematical practice, had placed price as the independent variable on the abscissa and quantities demanded as the dependent variable on the ordinate. Marshall established the now familiar arrangement showing price on the y-axis and quantity on the x-axis. His reason for violating common mathematical usage, while never explained, was probably to permit graphic derivation of market demand curves as the sum of individual curves; using the same coordinate system throughout, market demand curves could then be coupled with market supply curves, quantity now being the independent variable and price the determinate variable to be determined." (Blaug, Economic Theory in Retrospect, 1997, pp 382)