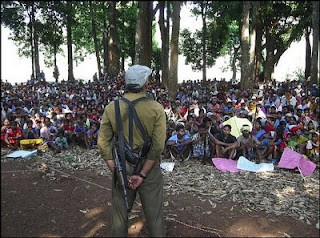 India is the world's largest democracy.  It also is home to one of the more persistent and deadly Maoist insurgencies in the world, the Naxalite movement in eastern India (Communist Party of India (Maoist) (CPI/M)).  The Naxalites were a splinter group that separated from India's Communist Party in the 1960s, and their hallmarks have been a commitment to violent revolution and a determined effort at mobilizing India's most disadvantaged rural people.  Here is a review article about the movement from The Economist in 2006 and a review in the New York Times in 2009, and here are several updates from The Economist (link, link, link).  (The Hindu provides frequent coverage of the Naxalite insurgency; for example, here.)

The 2006 Economist article was occasioned by a deadly attack against a police camp by Naxal guerillas in Chhattisgarh State. The attack signalled the fact that this movement continued to possess organization, followers, and deadly intent.  This map (reproduced from the Wikipedia article on the Naxalites) indicates the regions where the Naxalites currently have organizational presence; it is a large swath of rural India.  Estimates of the number of active fighters range from 14,000 to 20,000, with several times these numbers of local supporters and militias. 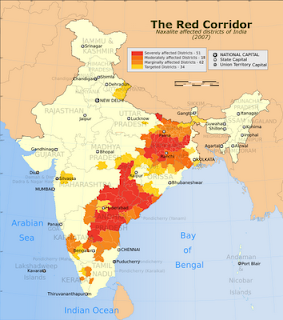 Naxalite attacks have continued since 2006.  Here is a chronology of attacks since 2006 compiled by NDTV (link).  Particularly widely noted in the world press was an April 2010 attack against Central Reserve Police Force, killing 75 police personnel, also in the forests of Chhattisgarh (link).  And the insurgency appears to be growing; in 2009 just under 1000 people were killed in Naxalite attacks -- almost triple the 2008 figures.

The leadership of CPI(M) has focused its mobilization efforts almost exclusively at the poorest of the poor and the most disadvantaged people within the caste system; and they have had particular success among tribal people living in India's forests.  But extending back to the 1960s the movement also has had some appeal to educated elites in cities and universities -- people on the left who believe that India has made no serious efforts to ameliorate poverty or caste.

What is surprising about this 40-year history is the fact that a violent revolutionary movement has managed to survive and conduct operations within the interstices of a democratic India.  Atul Kohli provided some context for this question in his 1991 Democracy and Discontent: India's Growing Crisis of Governability

.  Here is how Kohli summarized his assessment twenty years ago:


India is still, of course, a functioning democracy, but increasingly it is not well governed.  The evidence of eroding political order is everywhere.  Personal rule has replaced party rule at all levels -- national, state, and district.  Below the rulers, the entrenched civil and police service have been politicized.  Various social groups have pressed new and ever more diverse political demands in demonstrations that often have led to violence.  The omnipresent but feeble state, in turn, has vacillated; its responses have varied over a wide range: indifference, sporadic concessions, and repression.  Such vacillation has fueled further opposition.  The ineffectiveness of repression, moreover, has highlighted the breakdown of the civil machinery intended to enforce the law and maintain order. Inorder to protect themselves, citizens in some parts of the country have begun organizing private armies. The growing political violence has periodically brought the armed forces into India's political arena, whereas the armed forces were considered apolitical. (3)

The main national parties in India, Congress and the Hindu nationalist Bharatiya Janata Party (BJP), have contested for control of the national government.  But India's states have consistently demonstrated a wider range of parties and politics.  West Bengal has been governed for decades by the Communist Party Marxist (CPM).  Kerala has been governed through left-coalitions including the Communist Party of India (Marxist) (CPI(M)).  Both these parties have renounced revolutionary violence and pursue a poverty-oriented set of economic and political policies.  Other states are governed by right and center-right coalitions, with a rhetoric that is much more focused on Hindu nationalism and pro-market ideology.

Kohli's study of governability focuses on West Bengal, Gujarat, and Bihar, and his goal is to identify some of the political and social processes that have led to a national and regional governability crisis.  Kohli finds substantial inter-state variability in governability across the three states he studies.


The situation of total breakdown of order in Bihar, for example, has resulted from corrosion of the authority vested in the social structure and absence of cohesion in political structures.  Increasing power struggles in the society and a highly factionalized elite have provided a combustible political mixture that ignites periodically, and in Bihar even the forces of repression are ineffective. Political violence in Gujarat has had a more purposive quality than in Bihar.  It results not primarily from a breakdown of social order but from the calculated mobilization strategies employed by competing elites.

In contrast to the situations of these two states, the case of West Bengal demonstrates how the presence of a cohesive party can bring stability even in a highly mobilized political environment: Strong leaders and disciplined ruling parties -- forces that can impart a degree of cohesion to state structures -- can help moderate the impact of corrosion of authority in the social structure.  The emergence of incoherence in both state and social structures, however, is a sure recipe for a breakdown of order. (15)

So how is it possible for a violent rural insurgency to survive and grow in a modern democracy?  There seem to be several primary factors.  One is the familiar fact that insurgents establish their bases of operations in remote, lightly-policed regions.  The Naxalite movement has managed to secure its "base areas" in forests and other poorly developed rural areas. 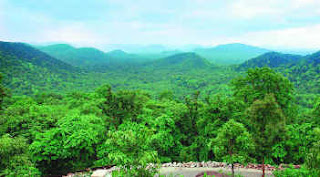 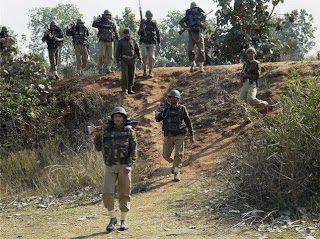 (The Hindu)
A second factor is the fact that Indian rural society is generally only lightly policed by professional police forces.  India is a "weak state" when it comes to local presence in the countryside.  The local presence of police is very thin on the ground, and easily overrun by trained guerillas.  Third, the Naxalites direct their mobilization efforts to the most disadvantaged and disaffected segments of rural Indian society; so their anti-state message is relatively well received.  And, finally, it would appear that the ideology of class and class antagonism has its own resonance in Indian political culture, far beyond the violent extremism of the Naxalite party.  This movement was a splinter from the Communist Party of India (Marxist) (CPM), which now governs West Bengal on the basis of its electoral successes (at least up until the present).  But CPM rhetoric sounds many of the same themes of anti-capitalism and anti-globalization that the Naxalites advocate.  So it is possible for elements of the left to become frustrated with the electoral program of CPM and develop new resonance with the radical program of the Naxalites.

The consensus view seems to be that the national and state governments in India have failed in efforts to suppress the Naxalite insurgency to date out of a failure of will, a degree of conflict of political interests in several states, and a failure to arrive at a winning strategy of police and military force combined with significantly more successful delivery of rural development successes.  Villages that lack roads, clean water, education, and health clinics are certainly more likely to find a radical program of change more appealing, and India's states have had little success in improving the quality of life for India's poorest rural people.
Posted by Dan Little at 11:45 AM

It is not merely the failure of Indian State to provide basic amenities to the rural populace and absence of policing that caused the naxal insurgency, but the vicious circle of parties-state-bureaucrats- MNC's with a plan to exploit the resource(mineral and others) of india by keeping away/ousting the rural masses from their land that really contributed to it. the term "Naxal Insurgency" has been used by the indian state to undermine/ignore the fight/protest of rural poor/dalits and adivasis(tribals). Even military is aided by Big Guns Like Vedanta to crush these struggles for human rights.

The problem of Naxalism is indeed quite complex. You did mention but it is quite an important point that it started off with many great intellectuals of the time joining the movement and it had a wide support base among the highly educated - it has simply degenerated from there. It wasn't always as violent as it is today. Today, there isn't any binding principle like there used to be. After the killing of 75 policemen that you mention, the leadership tried to distance itself by blaming it on untrained local members who didn't have their authorization. The masses and their own supporters themselves are not as violent or violence hungry.

Naxalism is complicated because it isn't "straightforward" - you don't have an enemy per se. I remember the army chief clearly refusing any army intervention even after the police massacre, which I see as great discipline by the army. It is tempting to get involved but that would break the fabric of the country.

Kohli's analysis seems anachronistic today. 20 years ago, West Bengal was probably one of the better places in India. That was before the free markets of 91 kicked in for India. Today, the situation is totally different. 20 years of Left rule has left a great city like Calcutta (Kolkata) miles away from a world class metropolitan. Bengal is still known for its anti-development policies. The first Tata Nano plant was kicked out of the state, which was a political highlight. It almost seems ironic now that he was musing about Bihar - just last month Bihar had their elections and the winning party had an amazing 85% majority simply because of good governance. Bihar today is the fastest growing state in India after Gujarat, clocking an impressive 11% growth rate. So much for socialism!

It seems that reaging Arundhati Roy could help understand this complex situation.

Walking With The Comrades
Gandhians with a Gun?
Arundhati Roy plunges into the sea of Gondi people to find some answers...
Arundhati Roy