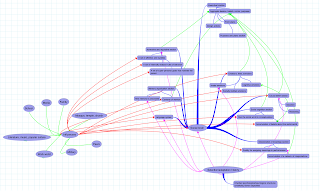 Here is a schematic effort at capturing some of the main factors involved in the socially constituted agent. There are the "influencers" that impact the development of the person and his/her "social brain" -- that is, the neurophysiological infrastructure we have evolved through our evolutionary history for gaining knowledge, representing the world, interacting with other people, etc. I've singled out media, family, school, religion, peers, popular culture, work, and the military as primary social and cultural influencers. And the red arrows indicate the schematic notion that these institutions and structured experiences affect the development of multiple aspects of the social agent's mental system. The idea is that each of these institutions creates an environment and a set of experiences that lead the young person into a specific "grammar" of interpretation and action.

Second, there is a marker in the diagram for the evolutionary history of the human "social brain" -- the neurophysiological systems we have evolved to support cognition, language, dexterity, cooperation, ... This part of the diagram represents a whole set of fields of interdisciplinary research, from neurophysiology to animal ethology to the study of morality embodied in human practices.

Third, there are the "sections" of the fully developed actor -- memory, emotion, meaning, purposes, norms, affinities, and social and causal beliefs. And there is an "executive" department that aggregates these action-relevant inputs into actions and plans. Each of these departments is itself the subject of development and influence by the "influencers"; and many interact with each other. In particular, memories and emotions may mutually interact. Adherence to a cause may be amplified by a set of memories and a set of emotions. And so forth.

I don't put this forward as a serious effort in the "science of the mind", but rather as a way of providing an inventory of the various aspects of consciousness and agency that we recognize as going into the social constitution of the actor; and a sketch of some of the various ways in which these aspects are influenced by social experience and culture.

To me the interesting part of the diagram is that it suggests many avenues of empirical and hermeneutic investigation. For example, how exactly are the memory system and its contents influenced by social experience? How does this system in turn influence social perception, choice, and action? Or the emotions: how are the emotions and passions shaped by social and cultural experience? And how do they in turn influence action? It would seem that there is ample room along each of the "arrows" of influence provided here for extensive empirical and interpretive investigation.
Posted by Dan Little at 2:58 PM

This is very cool.