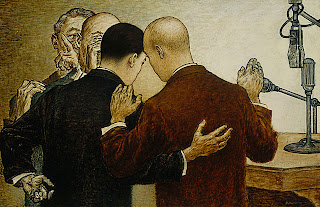 image: Conspiracy, Edward Biberman (cover illustration, Quiet Politics)
Pepper Culpepper's Quiet Politics and Business Power: Corporate Control in Europe and Japan sheds some very interesting light on one key question in contemporary western democracies: how do corporations and business organizations so often succeed in creating a legislative and regulatory environment that largely serves their interests?  And, for that matter, why do they sometimes fail spectacularly in doing so, even while spending oceans of money in the effort to influence public policy?

The book is a careful comparative study of the development of corporate governance laws and institutions in France, Germany, the Netherlands, and Japan.  It offers special focus on the institutions governing hostile corporate takeovers (very different across the four examples), but also takes on other issues of current interest, including executive pay.  But though the cases and issues considered in the book are fairly esoteric and specialized, Culpepper's analysis is intended to provide a broadly useful tool for understanding how corporate influence is exercised in a democracy.

Culpepper wants to know what political and situational factors explain the divergent course that corporate governance has taken in these four contemporary democracies, from more permissive to more restrictive.  Do elected officials determine the broad outlines of the governance regime?  Are differences across states the result of differences in the platforms of large political parties in these states?  Or are the outcomes driven by something else?  Culpepper thinks that it is usually something else:


In this book, I argue that the outcomes observed in these four countries result not from variations in government partisanship or from different interest coalitions, but from differences in the political preferences of managerial organizations.  In all four countries, the rules favored by the managers of large firms are those that triumphed, often against substantial political opposition. (3)

Or in other words, the outcomes are those favored by the business elites rather than elected officials or mass-based political parties.  And differences in outcomes are explained by differences in the business environment in the four countries.  This is the "business power" part of the question, and Culpepper's fundamental empirical finding is that businesses elites generally have proven successful in creating the institutional and regulatory regimes in their polities that they prefer.  But how do they succeed?

Here Culpepper's central finding is encapsulated in the other half of his title: these corporate governance issues usually fall in the domain of what he refers to as "quiet politics."  Noisy politics arise around the issues that generate significant and sustained interest by large numbers of voters; these issues have "high salience" to the electorate, and parties and elected officials find it in their interest to adjust their positions around voter preferences on these salient issues.  Quiet politics arise in the context of issues with "low salience" -- issues to which the mass of voters are largely indifferent.  "The political salience of an issue refers to its importance to the average voter, relative to other political issues" (4).  In the context of "low salience" issues that matter to the interests of high-level business managers and elites, it is possible for these elites to deploy an arsenal of influential tools that succeed very well in bringing about the legislative and regulatory outcomes that the managerial elites prefer.  Most fundamental is an information asymmetry between managers and policy makers:


The managerial weapons of choice in quiet politics are a strong lobbying capacity and the deference of legislators and reporters toward managerial expertise.  The political competitors of managers, be they liberalizing politicians or crusading institutional investors, lack access to equivalent political armaments, so long as voters evince little sustained interest in and knowledge about an issue. (4)

Culpepper unpacks the political advantage residing with business elites and managers in terms of acknowledged expertise about the intricacies of corporate organization, an ability to frame the issues for policy makers and journalists, and ready access to rule-writing committees and task forces.  These factors give elite business managers positional advantage, from which they can exert a great deal of influence on how an issue is formulated when it comes into the forum of public policy formation.  Culpepper refers to British Cadbury Committee, tasked to develop "best practices" in corporate governance (9), as an important example of an occasion where high-level managers had a very powerful ability to write the rules that would govern their behavior.  Vice President Cheney's energy committee during the Bush administration is another great example (link).  Informal working groups, containing a significant representation of managerial elites, have an ability to set the agenda for a regulatory regime that allows them to privilege positions they prefer and to protect their organizations from worst-case outcomes.


As in the case of direct lobbying, the power of managers in this context is the power to set the terms of the debate in an environment that is established with an explicit eye to protecting their interests. (9)

Here is one of many detailed examples that Culpepper studies in the book: the Peters Committee in the Netherlands in 1997, tasked to "establish a voluntary code of best practice in corporate governance" (100).  He notes that the Peters Committee was very similar in structure to the Cadbury Committee.  It was chaired by a former CEO, and had representation from the VEUO (Dutch Association of Securities-Issuing Companies), pension funds, and the Amsterdam Stock Exchange.  Unions were not represented.  And, Culpepper reports, the forty recommendations of the Committee were essentially ignored by the Dutch corporate actors.


Scholars of corporate finance point to the Peters Committee as a textbook example of the failures of self-regulation of business without any legal enforcement.  Yet from the viewpoint of the managerial interests that dominated the committee, its results were consistent with their highest political priority: to defend protection mechanisms [against hostile takeovers]. (101)

In other words: from the point of view of Dutch corporate elites, the committee was not a failure, but rather a demonstration of their ability to shape the agenda and secure a near-term environment that enabled their freedom of action.

But he also finds that these tools are really only decisive in the context of "low salience" issues -- issues that have not engaged the voting public with any intensity.  When a hitherto boring and technical issue of corporate governance suddenly jumps into high salience -- for example, the conflicts of interest faced by accounting firms involved in the Enron debacle -- these weapons of quiet influence essentially lose their ability to shape the outcomes.


The more the public cares about an issue, the less managerial organizations will be able to exercise disproportionate influence over the rules governing that issue. (177)

Parties, political entrepreneurs, legislative committees, and elected officials become interested in the issue; it becomes worthwhile for business journalists to learn the technical details; and the public demands solutions that may be contrary to the preferences of the business elite.  And Culpepper works through one of these examples in detail as well: the public and public policy debates that have flared up concerning executive pay (chapter 6).

In addition to its substantive political-institutional findings, the book is interesting for its methodology.  Culpepper explicitly favors the "causal mechanism" approach to social research and investigation.  He treats cases comparatively; and he attempts to "process-trace" the paths through which outcomes came about.  He depends extensively on interviews with pivotal actors in some of the cases studied.  He does a very good job of aligning his analysis against its main competitors -- median voter theories and coalition politics analysis.  Finally, the book is explicitly comparativist; he want to understand in some detail the situations and factors that lead to different outcomes with respect to corporate governance, and the rules governing hostile takeovers, in the four countries he studies.  So the book does an admirable job of sketching out some of the microfoundations of corporate influence in existing democracies.  As such, it is a very useful contribution -- it helps to connect the dots (link).
Posted by Dan Little at 9:28 PM

"these tools are really only decisive in the context of "low salience" issues -- issues that have not engaged the voting public with any intensity".

I would broaden low salience to include issues that are addressed in a way that they stay under the radar screen of other business groups. If you can push legislation that helps you, but does not hurt anyone else in an obvious (or at least a very difuse) way your chances of success are good.

thank you for your blog, it help me with букмекеры and was interesting