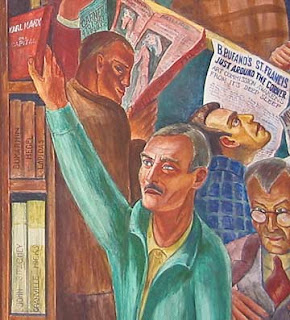 In an earlier post I gave a brief sketch of the emerging field of analytical sociology, and summarized its foundations around three premises: microfoundations, rational social actors, and causal mechanisms.

Marx is often thought to be a "structuralist" thinker, highlighting large social processes and entities such as the mode of production, the economic structure, and social class (for example, by Althusser and
Balibar in Reading Capital). However, I argued in The Scientific Marx

(1986) that a careful examination of Marx's economic writings reveals something quite different. I argued, first, that Marx embraced the idea that social explanations require microfoundations.


Marxist social science commonly has advanced macro explanations of social phenomena in which the object of investigation is a large-scale feature of society and the explanans is a description of some other set of macro phenomena. Some Marxist social scientists have recently argued, however, that macro explanations stand in need of microfoundations: detailed accounts of the pathways by which macrolevel social patterns come about. These theorists have held that it is necessary to describe the circumstances of individual choice and action that give rise to aggregate patterns if macroexplanations are to be adequate. Thus to explain the policies of the capitalist state it is not sufficient to observe that this state tends to serve capitalist interests; we need an account of the processes through which state policies are shaped and controlled so as to produce the outcome. (127-28)

Consider now a second issue underlying the call for "microfoundations" for Marxian explanations: the gap between the interests of a group as a collective and the interests of the individuals who comprise the group. (John Roemer refers to this as the "aggregation gap.") "Rational-action" explanations depend on identifying an individual's interests and then explaining the person's behavior as the rational attempt to best serve those interests. The model is often extended to account for collective behavior of groups as well.... However, Mancur Olson and others have made it plain ... that it is not sufficient to refer to collective interests in order to explain individual behavior. (129-30)

In both cases the objection being advanced to macro-Marxism is grounded in a recognition that there are no supraindividual actors in a society. (131)

After examining several examples of Marx's most important explanations, I conclude that his arguments conform to the requirements of the microfoundations principle. His most characteristic explanations proceed from reasoning about the actions of typical individuals within capitalist institutions to an effort to aggregate these individual choices up to the level of larger collective patterns.
Second, I argued that Marx's explanations were almost always grounded in an analysis that highlighted rational individual decision-making. But Marx differed from the perspective we would now call "public choice theory" in that he gave much greater attention to the historically specific motives and values of the actor.  Marx highlighted what we might now call "political psychology" of the actor -- the socially specific ideas, motivations, and ideologies that the actor acquired through ordinary experience of capitalism. So there is a developed "action theory" present in Marx's writings.  It is a theory that gives prominence to means-end rationality.  And it gives attention to the social specificity of the actor as well.
Here is how I described Marx's assumptions about the actors within capitalism in TSM:

Marx's accounts depend on an examination of the circumstances of choice of rational individuals. Marx identifies a set of motivational factors and constraints on action for a hypothetical capitalist and then tries to determine the most rational strategies available to the capitalist in these circumstances of choice.... A second part of this model of explanation involves an attempt to determine the consequences for the system as a whole of the forms of activity attributed to the typical capitalist at the preceding stage of analysis. (141-42)

But Marx has a nuanced and socially specific conception of the actor:

Against both these positions -- the nonsocial individualism of political economy and the uncritical holism of speculative philosophy -- Marx puts forward an alternative position. On this account the socialized individual is the ultimate unit of analysis in social explanation. "Individuals producing in society -- hence socially determined production -- is of course the point of departure" (Grundrisse 83).... On this account society is not a freestanding entity, and social relations exist only through the individuals who stand within them. At the same time, however, individuals exist only within particular sets of historically given social relations. Consequently, social explanations must begin with a concrete conception of the individual within specific social relations." (150)

These assumptions about social actors conform fairly well to the assumptions incorporated into analytical sociology.
And third, I argued that Marx offered causal mechanism explanations based on an analysis of what I termed the "institutional logic" of a particular social setting. So various features of capitalism are explained as resulting from rational actors situated within a particular set of institutions. These accounts serve as descriptions of the social mechanisms through which capitalist dynamics take place.


Marx attempts to work out the institutional logic of these capitalist institutions. What distinctive features of organization and development are imposed on the capitalist economy by its defining structural and functional characteristics? What are the "laws of motion" of the mode of production defined by these conditions? We may call this an institutional-logic analysis of social regularities, and it is significantly different from the construction of theoretical explanations in natural science. Such an analysis is concerned with determining the results for social organization and development of an entrenched set of incentives and constraints on individual action. (34)

Marx's interest in discovering and elaborating the social mechanisms that drive social processes is found within his theory of historical materialism as well.  In TSM I argue that Marx's claims about causation between levels of the social and economic structures of various modes of production are best understood as "mechanisms" explanations.


In order to understand fully this view of the relation between the economic structure and noneconomic phenomena, it is necessary to describe the mechanisms through which the lower-level structures constrain or filter superstructural elements. The filtering may occur through a variety of mechanisms, both intended and unintended. (56)

).  The institutions and structures of capitalism create a local environment of choice for individual capitalists and workers, and their behavior aggregates to a macro-outcome of interest (for example, the falling tendency in the rate of profit). This is a "logic of institutions" argument in a specific sense. The institutions (property relations) create an environment of choice in which actors pursue specific strategies, and these strategies aggregate to a certain kind of macro-level outcome. These are the "laws of motion" of the capitalist mode of production, in Marx's terms. And it is a mechanisms-based explanation in a specific sense as well. Marx is deliberately seeking out the social mechanisms through which the institutional setting produces a set of macro-outcomes, through their influence on the behaviors of the actors. The Scientific Marx offers a handful examples of these aggregative explanations. The point here is that this logic conforms very well to the framework of thought associated with analytical sociology.

There is one additional point of convergence between the methods I identified in Marx's writings in 1986 and the current doctrines of analytical sociology. I argued that the covering law model of explanation and the deductive-nomological model of justification did not work at all well in application to Marx's reasoning. The reason? Because the covering law model assumes that explanatory warrant proceeds from laws and regularities, whereas the heart of Marx's explanations rests upon the discovery of particular social processes and mechanisms.


Do Marx's explanations conform to the subsumption theory? ... There are statements of lawlike regularities in Marx's explanations, but these statements are somewhat trivial.... The real weight of the argument lies elsewhere: in the particular details of the circumstances of choice in which capitalists find themselves, and in Marx's reasoning from these circumstances to patterns of collective behavior. (152) [Or in other words, he seeks to uncover the social mechanisms of capitalism and their aggregative dynamics.]

The process of discovering an institutional logic is not merely one of working out the deductive consequences of the theory; it is rather discovering new aspects of the social process. These aspects are perhaps "implicit" in the original theory, but their discovery is a substantive one, not a mere deductive exercise. (153)

Here too there is a strong affinity between Marx's theory of science (as I interpreted it in 1986, anyway) and the philosophy of social explanation developed within analytical sociology.

-- falls squarely within what we would now call "analytical sociology" with a commitment to microfoundations, mechanisms, and socially constituted purposive actors. What a surprise!
Posted by Dan Little at 7:11 AM

Thanks for that great revisiting of the classics!

I believe that some of your insights also appear, in different, in Fromm's Marx's Nature of Man. Marx could not explore that topic without commenting on what makes individuals act by themselves, even when under pressure from the strong boards of history and politics.