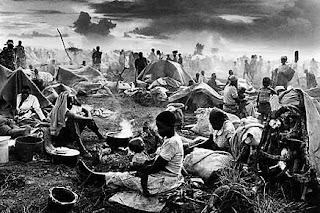 Here is a fine recent book that brings together recent thinking about development ethics with some of the specific issues faced in the field of global public health. Madison Powers and Ruth Faden published Social Justice: The Moral Foundations of Public Health and Health Policy in 2008, and it represents a genuinely interesting extended essay on the topic of justice in global health policy.  Here is an early statement of their governing perspective:


Our central focus, only vividly appreciated in hindsight, was in a notion of social justice that went beyond issues of distributive justice, micro-allocational questions of priority setting in medical care, or any number of questions centered on how one individual fares relative to some other individual. Beginning, as we did, with moral questions in public health and health policy, it is perhaps not surprising that our focus in social justice is largely directed at the well-being of people in social communities or groups. (ix)

What is evident here is that Powers and Faden are bringing the perspective of public health into the discussion of issues that have been raised in other contexts (development ethics, bio-medical ethics) without the population-based starting point.

A second important difference in approach taken by Powers and Faden is to take seriously the finding within public health studies that inequalities come into populations' health outcomes in ways other than inequalities of access.


We contend that it is impossible to make progress in our understanding of the demands of justice within medical care without looking outside of medical care to public health and to the other determinants of inequalities in health and indeed without situating an analysis of justice and health policy in the wider social and political context. (x)

This perspective brings Powers and Faden into a degree of connection to Kate Pickett and Richard Wilkinson in The Spirit Level: Why Greater Equality Makes Societies Stronger

A third distinctive feature of the project is the authors' rejection of the goal of arriving at a simple, unified theory of health justice.


In place of some single theory of justice drawn from one of the leading contenders for being the "right" account of justice, we argue instead that most of these other contenders have it wrong.  Indeed, we use the term 'theory' somewhat  cautiously. ... We choose to steer a middle course on the question, and we agree with Thomas Nagel's conclusion that whatever we are likely to attach the label of 'theory' to in the realm of normative inquiry will reflect an aspiration to develop some systematic but noncomprehensive account of some part of the moral landscape. (x)

The job of justice, as we see it, is to specify those background social and economic conditions that determine whether certain inequalities, that may themselves result from the promotion of other indispensable moral aims, should be seen as unfair. Ours is an account of justice that denies that there are separate spheres of justice, within health policy or within social policy more generally. (x)

Ours is a nonideal theory of justice, intended to offer practical guidance on questions of which inequalities matter most when just background conditions are not in place. (30)

Their central concern is with justice in health; and this comes down to a theory about inequalities.


The central question we pose in this book is, Which inequalities matter most? The aim of this book is to develop a theory of social justice suitable for answering questions of this kind in a variety of concrete circumstances.  (3)

But they insist on the point that theirs is not an "ideal" theory of justice; rather, it is intended to provide the basis for reasoned decisions about the practical, real problems we face in a world of substantial inequalities in life prospects.  Moreover, their account does not begin with a principle of distributive justice, but rather with a conception of the human good.  They offer Amartya Sen and Martha Nussbaum as exemplars rather than John Rawls (4).


As Sen correctly notes, a theory of justice of this sort begins with some underlying account of what persons "can do and be" (Sen 1993). Theories in this tradition start with ideals, to be sure, but they are ideals of a very different kind from those that form the starting points of Rawlsian ideal theory. (4)

So their theory is one that begins with a rich conception of human well-being and flourishing, not with a contractual deliberation between hypothetical individuals behind a veil of ignorance.  Here is a general statement of their view:


Social justice is concerned with human well-being. In our view, well-being is best understood as involving plural, irreducible dimensions, each of which represents something of independent moral significance. Although an exhaustive, mutually exclusive list of the discrete elements of well-being is not our aim (and may not be possible), we build our account around six distinct dimensions of well-being, each of which merits separate attention within a theory of justice. These different dimensions offer different lenses through which the justice of political structures, social practices, and institutions can be assessed. Without attention to each dimension, something of salience goes unnoticed. (15)

The six dimensions of well-being that they identify include health, personal security, reasoning, respect, attachment, and self-determination (16).

(as well as Sen's earlier work and that of Martha Nussbaum).  Here is Sen's description of his work in The Idea of Justice:


What is presented here is a theory of justice in a very broad sense.  Its aim is to clarify how we can proceed to address questions of enhancing justice and removing injustice, rather than to offer resolutions of questions about the nature of perfect justice. (kl 183)

Here the emphasis is on "enhancing" justice rather than providing a conception of ideal justice.  Sen's work here is intended to be practical: it should assist policy makers in their deliberations as reforms are considered.  Sen refers to this approach as "comparative justice".


We are engaged in making comparisons in terms of the advancement of justice whether we fight oppression (like slavery, or the subjugation of women), or protest against systematic medical neglect (through the absence of medical facilities in parts of Africa or Asia, or a lack of universal health coverage in most countries in the world, including the United States), or repudiate the permissibility of torture ..., or reject the quiet tolerance of chronic hunger. (kl 225)

In terms of the analysis offered by Powers and Faden, we improve justice by moving a population forward in any one of the six (or more) dimensions of human well-being that were noted.

Inherent in the idea of comparing the justice of several different scenarios, is the idea of reasoning across different perspectives on justice.  Sen is committed to the notion that it is possible to engage in reasoned dialogue with people with whom you have deep disagreements about starting points.  And this theory of comparative justice is intended to help facilitate those reasoned discussions.

Sen contrasts his approach to justice with that of John Rawls in these terms:


In the approach to justice presented in this work, it is argued that there are some crucial inadequacies in [Rawls's] overpowering concentration on institutions (where behaviour is assumed to be appropriately compliant), rather than on the lives that people are able to lead. (kl 203)

Several things seem important to me in both books mentioned here.  First, each is an innovative contribution to issues that are core to what we might refer to as "global justice" -- hunger, health, abusive states, educational deprivation.  Second, each is aiming to create a philosophical framework within which practical, real-world issues can be handled in a reasoned way.  Third, each seeks to broaden the moral perspective of contractualism that has set the terms for discussions of justice for the past forty years.  And, finally, each shuns the goal of formulating a general system or a unified theory on the basis of which to judge all possible social arrangements in terms of justice.

These features make the moral ideas of Powers, Faden, and Sen particularly helpful when we turn our attention to trying to influence international practices and institutions in the direction of greater justice for the people of the world.  The arguments are pragmatic, modest in scope, and potentially less bound to a particular tradition of moral thinking.  (Sen makes this latter point quite explicitly: "Some of the reasoning of, for example, Gautama Buddha (the agnostic champion of the 'path of knowledge'), or of the writers in the Lokayata school (committed to relentless scrutiny of every traditional belief) in India in sixth-century BC, may sound closely aligned, rather than adversarial, to many of the critical writings o the leading authors of the European Enlightenment" (kl 268).)