A recent post on the suburbs closed with the observation that there is an important "other" social space in the United States beyond the categories of urban, rural, and suburban.  These are the small cities throughout the United States where a significant number of people come to maturity and develop their families and careers.  I speculated that perhaps there is a distinctive sociology associated with these lesser urban places.  Here I will look into this question a bit more fully.

Google Maps limits the number of objects that can be placed on a map to 200 items, so it isn't possible to overlay these maps using Google Maps.  Google Earth does not have this limitation, and all these points are included on the Google Earth version of the map. Here is what the overlay looks like: 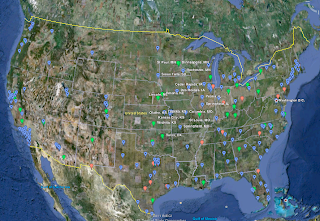 And here is a map of the Metropolitan Statistical Areas in the US in 1999. Wikipedia provides an up-to-date list of the MSAs in the US (link). (Many of the small cities actually constitute an MSA of their own; so determining whether a small city is "metropolitan" really involves the question of whether the place falls within one of the top 25-50 MSAs by population.) 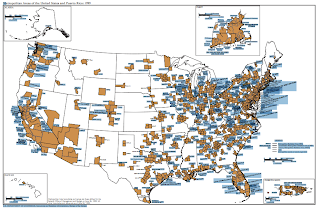 The group of cities I'm interested in here is a subset of the cities on the first map: those that are more than 50 miles from one of the top 25 cities on the second map.  This still leaves well over 100 cities in the United States with a couple of interesting characteristics: they are relatively small, so they can be expected to lack a number of higher-level functions and industries; and they are relatively isolated from other larger cities, so their populations are extensively dependent on the resources of the city itself for employment, social services, entertainment, consumption, education, etc.

So the takeaway question here is this: what is life like in Billings MT, Topeka KS, Norman OK, Pueblo CO, Springfield IL, Knoxville TN, Cary NC, Green Bay WI, Grand Rapids MI, Allentown PA, Shreveport LA, and Killeen TX?  What is it like to grow up in these places?  Where do young people go for post-secondary education?  What percentage of young people leave these places permanently in the course of their careers?  Where do the elected officials in these places come from? How are these cities doing, from the perspective of unemployment, neighborhood and business district decline, and social problems?

Further, we can ask whether there are any structural features in common that imply that these places are more similar to each other than they are to larger cities or smaller towns.  Are issues of immigration, race relations, drug use, teen pregnancy, or high school dropout rates different in these places?

Finally, we can ask whether growing up in these places gives rise to a specific mentality.  Do those of us who grew up in small cities like these -- Peoria, Rock Island, Springfield -- have a different set of values, a different way of looking at the world, or perhaps different ways of relating to people in ordinary social life?  Or are regional differences (south, midwest, Pacific Coast) more of a determinant of one's mentality?

(I've placed the lists of cities and MSAs I've used here as spreadsheets at Google Docs; link, link. Both lists come from Wikipedia entries on US Cities and Metropolitan Statistical Areas.)
Posted by Dan Little at 1:05 PM

North Carolina allows its municipalities to grow into unincorporated areas without the consent of the people within the area. They are even allowed to jump county lines.

Cary, NC has been a bedroom community of Raleigh, NC (2010 census pop 403,892) and Durham between it is sandwiched. Raleigh is the state capital, and Durham has Research Triangle Park.

The effect of these rules has allowed the cities to have less problems with the donut effect that cities in other states have. There can still be a donut, but at least the Cities still have funding.

The unintended consequence is that the incorporated bedroom communities also tend to grow. Around Raleigh you had Cary, then Apex, and now Wake Forest all growing at 100%+ per year. On the south side you have the blue collar version in Garner.
Growing up in one of these communities is a little like growing up in lower-rise, newer, relatively more affluent version of a borough of NYC. All have their cute little old downtowns, they all have one or more shopping-Mecca close by (not necessarily within town limits) , and a combination of local and chain businesses.

One unusual point of their demographics is that many of these communities have their own original groupings of minorities. Wake Forest used to be magnet school territory to attract upper end students from Raleigh to attend school there (voluntary diversity), and Holly Springs (attached to the hip of Apex) was predominantly African American. The influx of affluent suburbanite’s types into these small towns has radically changed the demographics. A lot of the new residents are minorities as well, but they tend to have different issues than the original African American minorities. Add to that the pockets of blue collar class Hispanics that have moved into the area since the 1990s (granted mostly in Raleigh, or into the satellite towns further out), and you have very much a confused but interesting mix.

Russell, This is great commentary -- thanks! From your description it sounds as though Cary is pretty porous towards both Raleigh and Durham. People in Cary would have a fair amount of contact with one or the other of these cities, right? So it's not particularly isolated socially, culturally, or economically. What's your impression of mobility -- do young people from Cary wind up within the greater metro region, or do a lot of them leave for other cities and states?

I suggest that you do this not only for the US, but with one or two EU countries for comparison. especially Germany, with a long term policy to foster those 50 - 200 k cities, created often about a 1000 years ago, with identities, and often a nice old castle on the hill : - )

i'd wonder about population flowing in and flowing out of cities this size:

1) Is there are a large retiree population in the city and what services does it use? How long can the city count on that tax base?

2) What happens to the outgoing/outbound college students, especially if the city is not a center for major education? For example, if the students from Cary go to UNC/NCSU/Duke/WFU etc., will they return to Cary once a degree (and potential mobility is achieved)?

I think the downside for bedroom community types (perhaps that of Cary) will suffer large losses unless the current college generation and recent (last 10-15 years) graduates choose to return to those types of communities.

Non-bedroom communities that have their own urban core (Duluth, Grand Rapids, Billings, MT, etc.) will have to work hard to maintain or attract newer industries.

Hi, probably our entry may be off topic but anyways, I have been surfing around your blog and it looks very professional. It’s obvious you know your topic and you appear fervent about it. I’m developing a fresh blog plus I’m struggling to make it look good, as well as offer the best quality content. I have learned much at your web site and also I anticipate alot more articles and will be coming back soon. Thanks you.