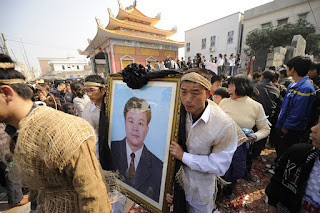 A period of demonstration and protest in the Chinese village of Wukan has caught the attention of world media in the past several weeks (link, link). The village is in Guangdong, the dynamic coastal province.  The demonstrations began in September against major land seizures by local government in alignment with developers, and became more intense in the past week when leader Xue Jinbo died in police custody.  (Here is a good Wikipedia article on the village.)  Land seizures seem to be the most volatile issue in China today, producing a large proportion of the roughly 90,000 civil disturbances the country currently faces a year.

Analysts are interested in probing the causes and dynamics of protest and resistance in contemporary China, including C. K. Lee (Against the Law: Labor Protests in China's Rustbelt and Sunbelt

).  Here, though, it may also be interesting to compare the current situation with the occurrence of similar incidents during the Qing Dynasty.

Fortunately, it is possible to do so on the basis of a recent relevant study. Ho-Fung Hung's recent Protest with Chinese Characteristics: Demonstrations, Riots, and Petitions in the Mid-Qing Dynasty

addresses exactly this issue in historical context. He looks at the period 1740-1839 and finds that the character of protest and resistance varied throughout the period. This is the early modernization period of Chinese history, and Hung believes that the subject of popular unrest has been overlooked in this period. The grasp of the central power of the state increased during this period, and it also represented a major advance in commercialization of Chinese society.

The main source of data on protests during this period that Hung analyzes is the Veritable Records of the Qing, a compendium of shortened versions of edicts and memorials from the emperor and other officials. Out of the 2,096 volumes of this archive Hung identifies 514 events of popular protest and 450 events of petitions to higher officials (55).  His empirical work involves coding hundreds of contentious events during the period, classifying them, and looking for patterns of change over time.  But how to categorize?  Here is his overview description of his approach:


I classify the documented protest events into different types according to their claims and repertoires. A protest's claim is a set of articulated demands advanced by the participants. The repertoire of a protest is the set of learned or invented acts that the protesters performed to attract the attention of potential participants and the authorities, as well as to persuade or force the authorities to meet their demands. (58)

One distinction between events that he draws from the existing literature on contention and rebellion is between backward looking and modernizing protests. Essentially the former represent demands to secure existing rights (or re-establish recently extinguished rights). The latter take the form of proactive protests aimed at creating new opportunities and rights within an emerging set of economic or social institutions. Hung rightly rejects the idea that European experience can provide a full theory of contentious politics. So he insists on using the evidence of non-western movements as an alternative basis of analysis and theory. China's experience in the mid-Qing provides an ample basis for arriving at such a scheme.

Hung doubts the utility of the concept of "backward-looking" protest in the mid-Qing period. Instead, he argues that protests throughout the period were proactive and aimed at securing better outcomes in the future for the protesters, in light of changing political and economic conditions. The large distinction that Hung favors as a way of categorizing contention has to do with the purpose and style of the mobilization. "Filial protest", or "state-engaging" protest, involves collective action intended to implore the state to honor its obligations. "State-resisting" protest involves action deliberately designed to challenge the authority and power of the state, often with the threat or reality of violence (58). And Hung believes this scheme is valuable for China, in part, because some surprising patterns emerge through these lenses. In particular, he finds the frequency of state-resisting protest varies significantly along this timeframe, from a high point in 1600-44 of 94% to a low in 1740-59 of 40%, rising again between 1776 and 1839 (figure 6.1).

Hung's account highlights several important things about Chinese protest. First is the point that protests exist within a set of material social arrangements that provide the interests that lead to mobilization. So an important dimension of analysis for uncovering the causes of a wave of protests is to analyze the changing economic and political circumstances that created new pressures and opportunities for ordinary people.  Second is the point that culture and repertoires of resistance give form to the protests that emerge.  Here he gives causal importance to Confucian ideas about the state, but also to heterodox ideas stemming from non-Confucian traditions (for example, White Lotus Buddhism).

A very old feature of Chinese protest involves the delivery of petitions to the central government (emperor) to protest abuses by local officials, tax farmers, or other scourges of peasant life.


In Qing times (1644-1911), a common remedy for powerless subjects abused by local officials was to travel all the way to Beijing to appeal to the emperor as their grand patriarch, hoping he would sympathize with their plight and penalize corrupt local officials. (1)

And, as Hung points out, this tradition continued through 1989 and beyond.

So what about Wukan?  Does Hung's analysis of mid-Qing protest shed any light on the nature of protest there?

Accounts make several things clear.  First, the cause of popular unrest that precipitated the first round of protest in Wukan had to do with an important material issue (land seizures) and the actions of potentially corrupt local officials in collusion with powerful developers.  Second, the protest intensified dramatically in the past 10 days after security officials took violent action against elected leaders of the protesters, leading to the seizure of Xue Jinbo and his death in police custody. Third, it appears through news reports that protests took the form of non-violent appeals for relief against corrupt officials -- similar to the tradition of filial protest.  The tradition of taking the protest to higher officials is also illustrated here, with the stated intention of marching to Lufeng, the local administrative center. Here is an indicative passage from the New York Times:


Almost to a person, the villagers are holding out hope that leaders in Beijing will intervene to settle the dispute and to investigate what they contend is widespread corruption in local affairs, including land sales. Saturday’s rally, laced with chants like “We love the Communist Party,” stressed the villagers’ loyalty to the central government. One prominent banner begged the central government to come to their aid. (link)

But the same article raises the possibility that this protest may move from state-engaging to state-resisting as villagers come to believe that they have no recourse from the central government:


“Our original intent was just to get our land back,” a 29-year-old homemaker who identified herself only as Mrs. Zhu said as she stood under a Chinese flag, mounted on a makeshift pole at a protesters’ checkpoint on the village outskirts. “We never intended that things would get into such a situation.”Asked what could be done, she replied: “We have to fight to the end. That’s the only way out. If we retreat now, all the hardships the government imposed on us will come true.”

Hung provides an interesting tabulation of several important characteristics of protests in mid-Qing China that I've reproduced below. I've supplemented the table in two ways.  First, I've included in this table the data Hung reports on the incidence of state-resisting protests, which vary significantly throughout the period he studies (figure 6.1). Second, I've added an additional column of my own indicating how Wukan seems to measure up on these criteria.  The finding that I've come to is that Wukan began as a "filial protest" through which villagers sought to engage the state to obtain relief from local officials.  The protest has been pushed into a more "state-resisting" posture, however, as a result of the violence and intransigence of local and county officials, and the fact that Beijing has so far ignored the villagers' demands. 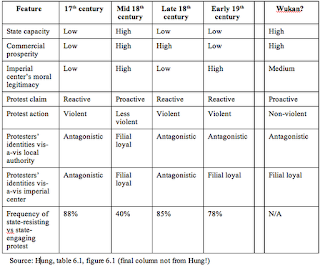