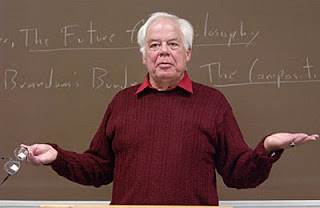 Where do new ideas and directions of thought come from?  Is it possible to set a context for important changes in intellectual culture, in the sciences or the humanities?  Can we give any explanation for the development of individual thinkers' thought?

These are the key questions that Neil Gross raises in his sociological biography of Richard Rorty in Richard Rorty: The Making of an American Philosopher (2009).  The book is excellent in every respect.  Gross has gone into thorough detail in discovering and incorporating correspondence with family and friends that allow him to reconstruct the micro setting within which the young Rorty took shape.  His exposition of the complex philosophical debates that set the stage for academic philosophy in the United States from the 1950s to the 1980s is effortless and accurate.  And he offers a very coherent interpretation of many of Rorty's most important ideas.  Any one of these achievements is noteworthy; together they are exceptional.

Gross is not interested in writing a traditional intellectual biography. Rather, he wants to advance the emerging field of "new sociology of ideas" through an extended case study of the development of a particularly important philosopher. The purpose of the book is to provide a careful and sociologically rich account of the ways in which a humanities discipline (philosophy) developed, through a crucial period (the 1940s through the 1980s).

The argument I now want to make is that the developments considered in chapters 1–8 reflect not Rorty’s idiosyncratic and entirely contingent biographical experiences but the operation of more general social mechanisms and processes that shaped and structured his intellectual life and career. (kl 5904)

Here is how he describes the sociology of ideas:


Sociologists of ideas seek to uncover the relatively autonomous social logics and dynamics, the underlying mechanisms and processes, that shape and structure life in the various social settings intellectuals inhabit: academic departments, laboratories, disciplinary fields, scholarly networks, and so on. It is these mechanisms and processes, they claim, that—in interaction with the facts that form the material for reflection—do the most to explain the assumptions, theories, methodologies, interpretations of ambiguous data, and specific ideas to which thinkers come to cleave. (kl 499)

The goal is to provide a sociological interpretation of the development of thinkers and disciplines within the humanities (in deliberate analogy to current studies in the sociology of science).  Gross acknowledges but rejects earlier efforts at sociology of knowledge (Marx, Mannheim), as being reductionist to the thinker's location within a set of social structures.  Gross is more sympathetic to more recent contributions, including especially  the theories of Bourdieu (field) (Homo Academicus

) and Randall Collins (interaction ritual chains) (The Sociology of Philosophies: A Global Theory of Intellectual Change

).  These theories emphasize the incentives and advantages that lead strategically minded professionals in one direction or another within a discipline or field. But Gross argues that these theories too are insufficiently granular and don't provide a basis for accounting for the choices made by particular intellectuals.


One does not have to be a methodological individualist to recognize that meso- and macrolevel social phenomena are constituted out of the actions and interactions of individual persons and that understanding individual-level action—its nature and phenomenology and the conditions and constraints under which it unfolds—is helpful for constructing theories of higher order phenomena, even though the latter have emergent properties and cannot be completely reduced to the former. (kl 158)

To fill this gap he wants to offer a sociology of ideas that brings agency back in.  He introduces the idea of the role of the individual's "self-concept", which turns out to be a basis for the choices the young intellectual makes within the context of the strategy-setting realities of the field.  A self-concept is a set of values, purposes, and conceptions that the individual has acquired through a variety of social structures, and that continues to evolve through life.  Gross emphasizes the narrative character of a self-conception: it is expressed and embodied through the stories the individual tells him/herself and others about the development of his/her life.


The theory of intellectual self-concept can thus be restated as follows: Thinkers tell stories to themselves and others about who they are as intellectuals. They are then strongly motivated to do intellectual work that will, inter alia, help to express and bring together the disparate elements of these stories. Everything else being equal, they will gravitate toward ideas that make this kind of synthesis possible. (kl 6650)
...
There is good reason to believe that such stories or self-narratives are not epiphenomenal aspects of experience but influences on social action in their own right. Indeed, few notions have been as important in social psychology as those of self and self-concept. (551)

Simply stated, the theory of intellectual self-concept holds that intellectuals tell themselves and others stories about who they are qua intellectuals: about their distinctive interests, dispositions, values, capacities, and tastes. (kl 6487)

And Gross thinks that these stories are deeply influential, in terms of the choices that a developing intellectual makes at each stage of life.  In particular, he thinks that the academic's choices are often inflected by his/her self-conception to an extent that may override the strategic and prudential considerations that are highlighted by Bourdieu and Collins. Bourdieu and Collins offer "no attempt to think through how the quest for status and upward mobility in an intellectual field may intersect and sometimes compete with thinkers’ cognitive and affective interests in remaining true to narratives of intellectual selfhood that have become more or less stable features of their existence" (562). In his view, identity trumps interest--at least sometimes.

Here is how he applies this analysis to Rorty:


My central empirical thesis is that the shift in Rorty’s thought from technically oriented philosopher to free-ranging pragmatist reflected a shift from a career stage in which status considerations were central to one in which self-concept considerations became central. (576)

Or in other words, Rorty's early career is well explained by the Bourdieu-Collins theory, whereas his later shift towards pragmatism and more heterodox, pluralistic philosophy is explained by his self-concept.

In Gross's telling of the story, much of Richard Rorty's self-concept was set by the influences of his remarkable parents in childhood and adolescence, James Rorty and Winifred Raushenbush.  The parents were politically engaged literary and political intellectuals, and they created an environment of social and intellectual engagement that set aspects of Richard's self-concept that influenced several key choices in his life.  Gross's depiction of the social and intellectual commitments of James and Winifred, and the elite milieu in which they circulated, is detailed and striking. This "social capital" served Richard well in his course from the University of Chicago to Yale into his academic career.

Gross believes that the key turns in Rorty's development were these: first, the decision to do a masters thesis on Whitehead at Chicago; then his choice of Yale as a doctoral institution, with a Ph.D. dissertation on "The Concept of Potentiality" (a metaphysical subject); his shift towards analytic philosophy during his first several years of teaching at Wellesley; his deepening engagement with analytic philosophy in the early years at Princeton; his eventual critique of analytic philosophy in Philosophy and the Mirror of Nature

; and his further alienation from analytic philosophy in the years that followed towards a contemporary pragmatism and a more pluralistic view of the domain of philosophical methods.  In other words, he began in an environment where pragmatism and substantive metaphysics were valued; he shifted to the more highly valued field of analytic philosophy during the years in which he was building his career and approaching tenure; and he returned to a more pluralistic view of philosophy in the years when his career was well established.

Rorty's turn to analytic philosophy makes sense in a Bourdieuian way. Gross describes his Wellesley-era and early Princeton philosophical writings in these terms:


They represent Rorty’s attempt to make contributions to analytic thought of a piece with those that other bright, young analytic philosophers of his generation were making. They were, in other words, part of Rorty’s efforts to position himself even more squarely within the mainstream philosophical establishment. (kl 4642)

Those observing Rorty’s career from afar might have interpreted this spate of analytic publications, coming on the heels of The Linguistic Turn, as evidence that Rorty had joined the ranks of the analytic community and saw his work as of a piece with that being done by other analysts. (kl 4853)

But eventually Rorty shifts his philosophical stance, towards a pluralistic and pragmatist set of ideas about philosophical method and subject matter.  Here is how Gross summarizes Rorty's turn to pragmatism:

As Rorty went about developing a historicist, therapeutic alternative to the analytic philosophy he saw being practiced by his Princeton colleagues and others, no one’s work was more important to him than that of Thomas Kuhn. (kl 5054)

And Gross dates Rorty's impulses towards pragmatism to a much earlier phase of his intellectual development than is usually done:


Far from it being the case, as some Rorty interpreters have claimed, that Rorty’s interest in pragmatism arose only after he made a break with analytic philosophy, his earliest work is characterized by a desire to harness pragmatist insights in the service of a revised conception of the analytic project. (kl 4037)

Rorty rode both of these intellectual waves, becoming caught up in the rigorism of the analytic paradigm in the 1960s and then emerging as a leading figure in the antirigorist movement of the 1970s and 1980s. (kl 7058)

The book repays a close reading, in that it sheds a lot of light on a key period in the development of American philosophy and it provides a cogent sociological theory of the factors that influenced this development.  It is really a remarkable book. It would be fascinating to see similar accounts of innovative thinkers such as Nelson Goodman, John Rawls, or (from literary studies) Stephen Greenblatt.  That's not likely to happen, however, so this book will probably remain a singular illustration of a powerful theory of the sociology of ideas.