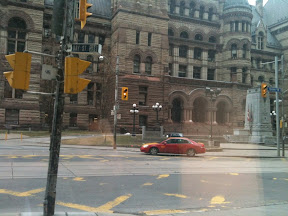 There is a lot of interesting stuff we encounter every day, if we stop to think. Often we don't have the knowledge necessary to make sense of it, so it remains interesting but opaque. And plainly each vignette has a dense set of social facts standing behind it that need to be teased out if we are to understand the vignette.

Here is an example. I'm in Toronto this morning and I've seen something here I haven't seen in other cities -- young people, mostly men, sleeping on the sidewalk at busy intersections. They look comfortable in down sleeping bags -- as if they were camping out. But they aren't camping; they're sleeping in full daylight, with pedestrians and drivers passing in the hundreds every hour. Here is a specific guy sleeping on Bay St Sunday morning. 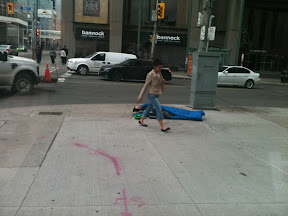 He looks to be in his twenties, lightly bearded. And, by the way, he's got a plastic St Patricks Day hat near his head. As pedestrians walk by they take a curious look and then pass on. No one stops. It doesn't look like a safe place to sleep -- cars are passing in the street on the turn from Queen St, and just a slight mistake takes them onto the curb and onto the guy.
Now here's an interesting development -- a real homeless guy, over sixty, heavily bearded, dressed warmly, happens by. He takes a close look, then walks around the sleeping guy to check him out; stands and thinks for a minute, then moves on.

Why are they here? There was an Occupy Toronto demonstration in City Hall Park nearby yesterday -- is this young guy an Occupy protester? The Old City Hall and green space is just across Queen St. Why hasn't this guy chosen to locate himself on the grass somewhere more secluded? Perhaps because the police would make him move on; perhaps because more secluded space is also more vulnerable space. And why not in a city shelter? They exist, so why has this young guy chosen the street?

This one sleeping guy is perplexing enough; but in the past few days I've seen several other similar instances within ten blocks of City Hall. So it's not an isolated example. Why does this take place here in Toronto but not Boston or Chicago? (I mean sleeping right in the middle of the sidewalk; of course there are homeless people in all those cities.) 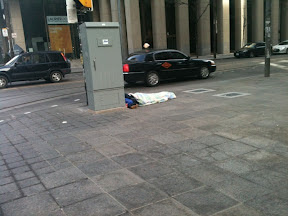 But here is another interesting point to me: I'm observing this scene without any special background knowledge. What would a social worker, a street activist, or a policeman see that I don't notice in this scene? The policeman might quickly have registered the fact that the green spaces across Queen St aren't actually that attractive for sleeping because the police patrol them and evict sleepers. The activist might notice some features of the guy allowing her to identify the political statement he might be making. The social worker would have a much clearer idea about the shelter system.

But now I get a chance for a little clarity. A block away I encounter two young guys (20s) sitting on the street, right at the curb, panhandling on Queen St. They greet me. I stop and talk to them. I ask why the guy down the street is sleeping right there on the sidewalk. G1 said that he sleeps there too sometimes. I asked why not in the park. He says because Mayor Ford has ordered that people be ticketed for sleeping in the park. He himself has been banned from City Hall grounds because of panhandling. And if you go near the Marriott entrance just down the block, Marriott security make you move. I asked why they don't choose more secluded spots. G2 says you need to sleep near a vent for the warmth. The good secluded spots are taken. Sometimes these two guys find a spot under a structure down the street.

I ask about Occupy Toronto. G1 is enthusiastic. He says he was welcomed into the biggest tent, the Communist tent, and slept there while Occupy was going on. It was a 12-person tent. But the guys say the demonstration that I heard yesterday wasn't Occupy, it was a demo about Syria. G1 says, why demonstrate against Syria when people here are suffering?

I ask if it is safe sleeping on the street. G1 says he'd been robbed recently. The thief ripped his inside pocket out and took a bag with 35 cents, a tooth brush and toothpaste. G1 says indignantly, "You're going to rob a man for his toothpaste?" They say people have been killed down the street a ways.

I ask about the city shelters. Neither of them wanted to go there: they refer to bedbugs, diseases, and seriously crazy people who might hurt you.

I ask about their educations. G1 says he'd failed 9th grade 5 times. G2 says he was close to graduating high school. G2 says people on the street sometimes have parents they can go back to, but G1 says his parents are both dead. G2 says it's hard to get together "first and last" to get a place to live, but he's trying. (First and last month rent for a lease.)

G1 gives me some advice about street people. He holds out his jacket, which is clean and in good shape aside from the ripped-out inner pocket. He says, when you see a guy who's all dirty, bad clothes, bad teeth, that's a crack-head. Whatever you give him he'll just turn around and buy crack. He then grins to show me his teeth, all in good condition.

Both guys are friendly and very willing to talk. (Is there a personality type that does best as a panhandler? Are the same attributes of gregariousness that work well in business also good in this part of the street?) I liked these young guys, and it's painful to know that there's nothing for them in Toronto or in their futures.

Toronto people -- what am I missing here? How do you understand this scene?
Posted by Dan Little at 12:52 PM

I've seen young people sleeping on that corner many times. This seems about right, this seems about right. The job situation in Toronto and the Province of Ontario has been fairly abysmal for a long time. Even for university graduates. Opportunities exist but they are extremely limited. Lots of immigrants in Toronto who have qualifications that aren't recognized here compete for the low level service jobs.

I'm not from Toronto (but I have lived in calgary, vancouver, and now montreal).

I have never felt in danger down town in any of those cities (I'm young, I'm out at all times of the day and night). Maybe it is just the fact that violet crimes are less endemic in Canada.

Also maybe homelessness is less socially stigmatized. I would say I am upper middle class, but I have had friends growing up in Calgary whose siblings were homeless, parents were addicted to serious drugs. The class divide between the bottom and the middle, is less apparent. There was a McGill Daily article about a guy who is going to school at McGill homeless right now. Apparently he is not particularly destitute, but he doesn't want to take on student loans. http://www.mcgilldaily.com/2012/02/homeless-on-purpose/

I saw this seven years ago in T.O., and before that again in the late 90s. Boggled my mind. In Winnipeg we have a much higher per capita population of homeless people, but they never sleep on the street here in this casual manner - generally they've passed out, not settled down for the night. This is true even in the summer.

It might, however, be a pattern that developed in Toronto because of its more clement weather year-round. Here, we have people searching the poor streets for sleepers in winter, so perhaps the annual break also breaks the pattern.

Thanks, all, for these first-hand comments ... I appreciate hearing your experiences.

hmmm.....I work with feeding and caring for the street dwelling Torontonians your referring to and try as I may, I cant specifically say why each one is there in a general sense...Here are a few reasons I have heard of; broken hearts, drugs, mental illness, running from home, avoiding violence.....and a hundred other related reasons.....including unemployment.

I am agree with you why? Why we not help this humans being to study
work and support thenself than ignore then on the street. Is commom
to help others countries but why we not help our people here.
How you can help your neigbours when you not help your family.
My dream is to help this people to go ahead in life.
I ask God to give me guidance to realize my dream in reality.