Giddens on agents and structures 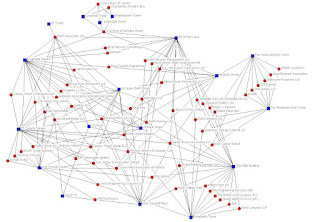 Anthony Giddens is one of the theorists whose ideas are most often invoked when the idea of social-structural explanation is in play. His 1979 collection of essays, Central Problems in Social Theory: Action, Structure, and Contradiction in Social Analysis

, is a classic statement of some of his views.  Here is how he frames his core concern in a key essay, "Agency, Structure":


The principal issue with which I shall be concerned in this paper is that of connecting a notion of human action with structural explanation in social analysis. The making of such a connection, I shall argue, demands the following: a theory of the human agent, or of the subject; an account of the conditions and consequences of action; and an interpretation of 'structure' as somehow embroiled in both those conditions and consequences. (49)

Giddens refers some of these issues back to the tradition of American pragmatism, and the theories of George Herber Mead in particular (link).


Within more orthodox sociological traditions, symbolic interactionism has placed most emphasis upon regarding social life as an active accomplishment of purposive, knowledgeable actors; and it has also been associated with a definite 'theory of the subject', as formulated in Mead's account of the social origins of reflexive consciousness. (50)

Giddens faults this tradition for not being able to conceptualize the social-structural context with sufficient precision.  He finds, for example, that Durkheim's efforts to provide theoretical resources for describing the "external or objective" character of society were inadequate (51).  Generally his view here is that theorists have failed in their conceptualizations of structures and agents:


Parson's actors are cultural dopes, but Althusser's agents are structural dopes of even more stunning mediocrity. (52)

The problem is that neither individualists nor structuralists have succeeded in expressing the inherent interdependence of the two poles.  Give primacy to structures and the agents are "dopes" -- robots controlled by structural conditions.  Give primacy to individuals, and structures and institutions seem to disappear.  His own view is that the two poles of structure and agency must be considered from within a common formulation:


I shall argue here that, in social theory, the notions of action and structure presuppose one another; but that recognition of this dependence, which is a dialectical relation, necessitates a reworking both of a series of concepts linked to each of these terms, and of the terms themselves. (53)


'Action' or agency, as I use it, thus does not refer to a series of discrete acts combined together, but to a continuous flow of conduct.  We may define action ... as involving a 'stream of actual or contemplated causal interventions of corporeal beings in the ongoing process of events-in-the-world'. (55)

Actions take place in contexts; and the contexts include crucially the actions of other people and the constraints and opportunities created by social structures.  Giddens adds another component of action: the forms of knowledge that actors have on the basis of which they tailor their interventions.

So what about "structure"?  Giddens prefers to talk about "structuration" -- the temporally extended processes through which social constraints evolve and take hold.


I want to suggest that structure, system and structuration, appropriately conceptualised, are all necessary terms in social theory. (62)

What is a "structure"? Here is one effort at definition provided by Giddens:


The term 'social structure' thus tends to include two elements, not clearly distinguished from one another: the patterning of interaction, as implying relations between actors or groups; and the continuity of interaction in time. (62)

He refers to these two aspects as "syntagmatic" and "paradigmatic" dimensions of social structures.  And he summarizes the concept of structure in these terms: "the rules (and resources) that, in social reproduction, 'bind' time" (63). "Structures can be identified as sets or matrices of rule-resource properties" (63-64).  Here is a summary table: 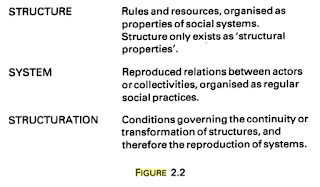 The activity of structuration is key to Giddens's theorizing agents and structures, because it represents the link between the two.

The concept of structuration involves that of the duality of structure, which relates to the fundamentally recursive character of social life, and expresses the mutual dependence of structure and agency. (69)

Knowledge plays a key role in structuration; it provides the basis on which agents both understand and transform the rules around them. Agents, in other words, are reflexive cognitive actors.

Institutions involve signification, domination and legitimation (106). In "Institutions, Reproduction, Socialisation" Giddens talks about structures in terms of means of mediation and transformation within a collection of active participants.

I want to suggest that each of the three aspects of structure I have distinguished can be understood as ordered in terms of the mediations and transformations which they make possible in the temporal-spatial constitution of social systems.... Writing and other media of communication ... bind much greater distances in time and space. (103)

A distinction that comes up a lot in Giddens's work in this collection is that between synchronic and diachronic states of affairs.  We can think of a structure as a snapshot at a moment in time of a set of relations, beliefs, rules, and opportunities.  This would be a synchronic description of the structure; it is a static approach to a social structure. Or we can look at a structure as being in a process of generation, reproduction, and transformation; this would be a diachronic and dynamic way of thinking about structures.  Giddens's affinity to the idea of structuration suggests that he is especially interested in the dynamic questions -- the ways in which actors, roles, and rules interact over time, leading to changes in the snapshot.

What Giddens's treatment here doesn't adequately express, in my reading, is what we think structures and institutions really are.  Are they complexes of patterned activities by numbers of actors?  Are they ensembles of social practices? Is the IBM corporation simply a large set of social interactions?  Or is there an abiding abstract social reality -- division of labor and authority; segmentation of responsibilities; interlocking productive activities -- that can be identified as a social entity? What about the capitalist economic structure; is this a stable social entity, or is it simply an ensemble of patterns of relations of meaning and power?  It seems that these examples are the kinds of thing that Giddens wants to refer to as a "system"; but it's not clear.

So the concept of social structure still seems underdeveloped here. What about the idea that agent and structure are inseparable? This I understand in a fairly direct way: agents are always located in a web of social relationships that define them and define the opportunities they confront.  And structures are always constituted by individuals thinking, acting, and interacting in specific ways.  So we literally cannot separate agents and structures; they are mutually constitutive.

(Here is an intriguing dynamic network simulation of the spread of HIV infection based on data from the National Longitudinal Study of Adolescent Health.  "Small differences in reported behavior can potentially explain the large racial disparities in HIV infection observed in the United States.")

I wonder if the complexity that stems from actors participating in concurrent and overlapping structures and systems, with differing and even inconsistent structurations, might make if difficult to adequately describe bounded snapshots. Focusing on the dynamic descriptions of structuration processes and understanding their dynamics may be a more reasonable first goal.

And this is refered as relationalism in general or relationism in sociology:

"So the concept of social structure still seems underdeveloped here. What about the idea that agent and structure are inseparable? This I understand in a fairly direct way: agents are always located in a web of social relationships that define them and define the opportunities they confront. And structures are always constituted by individuals thinking, acting, and interacting in specific ways. So we literally cannot separate agents and structures; they are mutually constitutive."