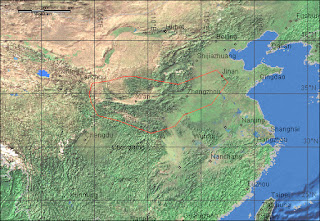 One of the books on the Chinese Revolution that I particularly respect is Odoric Wou's 1994 Mobilizing the Masses: Building Revolution in Henan.  As noted in an earlier post, histories of the revolution have gone through several waves, and a general trend has been towards more focused regional studies.  Wou's book belongs in what I categorize as the third wave (along with Chen Yung-Fa's Making Revolution: The Communist Movement in Eastern and Central China, 1937-1945). Here is how Wou characterizes this evolution:


Communist revolutionaries always operated under local conditions, were involved in certain local power politics, and addressed certain needs of the local peasantry. It is imperative to pay particular attention to localities, if possible at the county, the subcounty, and even the village level. Mass politics are invariably related to community issues and community politics. (14)

Here I want to focus on Wou's title itself: Mobilizing the Masses.   Both parts of the title are important: the idea that the Chinese revolution was a mass-based revolution, and the idea that the Chinese Communist Party succeeded because it pursued successful strategies of mobilization.  The Russian Revolution, by contrast, was not mass-based; Lenin's revolutionary group was able to seize power without mass support, and the Bolsheviks did not develop effective strategies of mass mobilization.  So the Chinese Revolution is different. We have historical examples of revolutions that did not involve the masses in contemporary society; and perhaps we could imagine a mass-based revolution that succeed without the deliberate strategies of mobilization that emanated from a revolutionary party.  (Lucien Bianco doubts the latter possibility, however; he argues that spontaneous uprisings by peasants or workers are doomed to failure (Peasants Without the Party: Grass-Root Movements in Twentieth-Century China).)

So why was the committed support of the masses crucial to the success of the Chinese Revolution? Why is mass support difficult to achieve for an emerging revolutionary movement? And what were some of the strategies of mobilization that the CCP used in the 1930s and 1940s to bring about that mass support?

Mass support for a revolutionary movement is in one sense unlikely. The risks of being a supporter are great, and the a priori likelihood of success is small. The forces of order are generally powerful and pervasive, whether warlords or a central government. So peasants and workers are asked to assume great risks for little prospect of success.  As James Scott has emphasized in many writings, there are always options of everyday coping and everyday resistance that allow ordinary people to make do in the context of a repressive state and an exploitative society (Weapons of the Weak: Everyday Forms of Peasant Resistance). (I particularly enjoy the scene that Scott describes of Malaysian villagers gathering and laughing as the hired mechanical harvester sinks inexorably into the flooded rice paddy.) These facts imply that mass support for a revolutionary movement will not arise spontaneously; rather, it is necessary for a revolutionary organization and a set of leaders to pursue an effective bundle of strategies aimed at mobilizing the masses.  This means possessing a compelling set of strategies, and it means developing a large and pervasive organization that will be capable of placing "brokers" or cadres in local settings where they can influence ordinary villagers to support the strategy.

So why was the CCP forced to turn to the peasant masses in the first place?  One part of the answer is Mao's own political theories of how revolution could succeed in China based on the support of the population; and the population was overwhelmingly rural and poor in the 1920s and 1930s.  (It is interesting that Mao's theories of peasant revolutionary potential continue to propel a large Maoist movement in India; post.) But a more material reason has to do with a stunning defeat suffered by the CCP at the hands of the Guomindang Republican forces in 1927 -- the massacre of the urban-based Communist organization in Shanghai.  From that point forward the strategy of bringing communist revolution to China on the strength of an urban revolutionary movement was untenable, and resort to China's peasantry was the only option available.

So how did the CCP attempt to mobilize the rural masses? What political ideologies did the CCP settle on as being the most promising for arousing the emotions and political commitments of ordinary peasants throughout rural China? How did the CCP use local organizations and cadres to effectively communicate those messages and solicit political engagement by peasants? More specifically, what were those strategies in Henan, the focus of Wou's book?

Two strands of mobilization ideologies have been emphasized by historians of the revolution. The first is class mobilization -- a deliberate attempt to emphasize the exploitativeness of rural land relations, and the conflicts that exist between landlords, rich peasants, and poor peasants. Here the idea is that poor peasants can be energized by a clear recognition of the ways in which their livelihoods are harmed by the social privilege of rich peasants and landlords, and they can be motivated to take on the risky business of revolution. The second is a nationalist appeal in the context of the Japanese occupation of China, and the claim that the Red Army was more effective than the Guomindang military in fighting the Japanese. Here the idea is that peasants of all strata can be motivated to defend their families, their villages, and their region against the imperialistic (and harsh) Japanese invaders.  Wou documents both strategies in Henan.


After three executive committee meetings, the Eyuwan party decided to reformulate and radicalize the land reform program. The new policy was to "use the agricultural laborers as the base. Form a solid alliance with the poor peasants. Stabilize the middle peasants. Shake up and eliminate the rich pesants." Politically, the new program called for the discharge of rich peasnts from all Communist mass organizations, including the Red Guards, Youth Vanguard, and Children's Corps. (125)

And here is the nationalist strategy:


It was during the Sino-Japanese War that the Communists began to revitalize their revolutionary movement. By skillfully playing the game of coalition politics, the party took steps to rebuild its bases and consolidate its power in eastern Henan. Japanese imperialistic intrusion into China offered the Communists a new political opportunity. The war eroded Guomindang state power, changed the political balance, and created a political vacuum in the region. In these favorable conditions, the Communists identified themselves with the nationalistic cause and issued a patriotic appeal to the people. (207)

Finally, Wou emphasizes throughout the necessity for political skill and compromise on the part of party leaders. It was necessary to form coalitions with other non-revolutionary organizations in order to carry forward the objectives of the party, and the CCP leadership in Henan was fully prepared to enter into such coalitions.

These details are of interest chiefly because they illuminate the nuts and bolts of radical social change in a large country.  It is plainly not enough to observe that a large group of people have interests that are in conflict with the policies and social relations of their country or region.  In addition, several things are needed: a sustained and locally implemented strategy of mobilization and a revolutionary organization that acts intelligently and opportunistically as the balance of forces shifts at various times.

These observations have implications for China's current realities as well.  It is evident that there are millions of Chinese people who have serious grievances -- work conditions, environmental pollution, corrupt officials, etc. But the Chinese government has been very adept at preventing the emergence of organizations that might attempt to mobilize that discontent into effective efforts to challenge the state's policies.  Without organizations, the current level of grievance in China is unlikely to pose a serious challenge to the policies of the state.