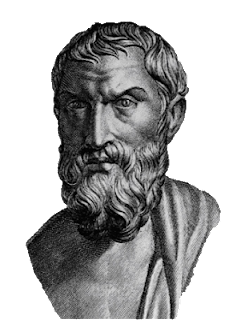 Steven Greenblatt's recent book, The Swerve: How the World Became Modern, is an ambitious widening of Greenblatt's intellectual palette. The title of the book refers to one of the central ideas in the metaphysics of Epicurus: the idea that atoms sometimes deviate from their straight courses, permitting collisions. This fact, according to Epicurus, is the only possible source of freedom of the will. So swerving is what takes determinacy out of nature and human action.


That is why it is necessary to admit the same thing for the atoms, namely, that there is another cause of motion besides blows [from collisions] and weight, which is the source of our inborn capability [to act freely], since we see that nothing can come from nothing. For the weight of the atoms prevents it from being the case that everything happens as a result of the blows [of collisions], which are like an external force. But that the mind itself does not have an internal necessity in all its actions, and that it is not forced, as though in chains, to suffer and endure, that is what this tiny swerve of the atoms, occurring at no fixed time or place, accomplishes. (The Epicurus Reader: Selected Writings and Testimonia, kl 1610)

Greenblatt's book shows a great deal of regard for the philosophy of Epicurus and the voice of Lucretius. Lucretius's poem was a passionate follower's presentation of the philosophy of Epicurus. Lucretius aimed to present the materialism, empiricism, ethics, and atheism of Epicurus to Roman literati in the most convincing way possible, because he was himself a devoted follower of Epicurean philosophy. Greenblatt gives a good exposure to what some of those ideas and values were, and he believes that its rediscovery in the early fifteenth century had a major influence on the development of western culture from that point forward.

But this isn't primarily a treatment of Epicurus or Lucretius or philosophical ideas.  Instead, it is an account of the fragility and contingency of books and ideas in history.  Greenblatt relates the circumstances of the rediscovery of Lucretius's The Nature of Things by Poggio Bracciolini in the early fifteenth century. It was Poggio whose obsession with ancient words and books prevented the permanent loss of this work. Poggio isn't romanticized. But it was his passionate commitment to Latin rhetoric, grammar, and thought, and his conviction that the current times were a corrupt deviation from the ideals of the ancient world, that led him to his pursuit of forgotten manuscripts throughout Europe.

Greenblatt paints a vivid picture of the intellectual environment of educated secular men like Poggio in the circumstances of early-Renaissance Rome and Florence and the complicated windings of the Catholic Church within that world. This is fascinating and absorbing all by itself, similar to Greenblatt's work in Will in the World: How Shakespeare Became Shakespeare.

But even more fascinating is a persistent subtext, unspoken but visible: human civilization itself took a disastrous "swerve" when Christianity took hold and the values, knowledge, and secular lives of the ancient world were all but extinguished. The humanism of Greek and Roman philosophers was eclipsed and largely forgotten, and a harsh and punitive religious orthodoxy took its place. The vile and bloody murder in 415 of Hypatia by a Christian mob in Alexandria captures well this transition (kindle loc 1435). Books, independence of thought, the love of learning for its own sake -- these values so prominent in the ancient world were suppressed and forgotten.

Nothing more emblemizes this swerve than the clarity of Lucretius and the near extinction of his thought in the emerging world of Europe after the dark ages. The rediscovery of the Lucretius book permitted the reintroduction of a revolutionary set of philosophical ideas into the Renaissance world that had enormous and emancipating effect. And yet it was a near thing: without Poggio's determination to rescue ancient books, this manuscript might well have eventually have turned to dust.

What seems particularly interesting about this episode is the force it gives to the idea that every aspect of human history is contingent. There is no teleology; there is no tendency towards better and better systems and values; there is often not even a cumulativeness of human achievement; there is only the helter-skelter randomness of key events that push developments in this direction or that.

Here is a good article by David Konstan on Epicurus in the Stanford Encyclopedia of Philosophy; link. There are affordable Kindle editions available for the writings of Epicurus and Lucretius, as well as Greenblatt's own book.

Not to be picky, and as an aside from the main point; but isn't Lucretius's swerve random causality rather than self determination? How much does Greenblatt's swerve thesis stand in the Weberian tradition of the history of ideas?

I enjoyed your review, and I haven't read the book. My only quibble is that the rise of Roman Christianity, aka Catholicism, and the decline of classical thought should be seen in terms of correlation, not causation. The same is true of the rise of Islam and the Caliphate in the East. The common cause of all these problems was the collapse of the Western and eventually the Eastern Roman Empire, and the collapse in trade across the Mediterranean that went along with it.

The period of decline from about 300 AD to the dark age trough in 900 AD represented a loss of knowledge, population, technology, and rights across all of Europe. Consider this--in 300 AD, the population of the Western Empire stood at 22 million. In 650 AD the equivalent geographic region had an estimated population of 9 million. At the same time the works of the Greeks were being lost, literally thousands of Christian, gnostic, Jewish, and Pagan sects vanished from existence and memory. There was a loss and consolidation of resources and information throughout the empire, but it was because of loss of order and a common language in which to do business. When trade collapsed, every civilization around the Mediterranean became susceptible to famine and disease. Information transfer vanished. When a group died-off, as all groups eventually must, their knowledge died with them. We can hardly fathom a reality like this.

It is not that love of learning was suppressed. The real problem was that for hundreds of years each generation was smaller and worse-off than the one before, and there was nothing anyone could do about it. And let's be honest with ourselves--the collapse of Rome was primarily caused by internal politics and hyperbolic cultural growth, not religious strife.

Thanks, Cameron. You've highlighted crucial material and demographic facts that help make sense of why and how ancient learning almost disappeared. What remains is the simple but important fact that the value system and thought of the ancients was all but extinguished and a political and philosophical regime built around Christianity took its place in Europe. And the later system was profoundly anti-humanist.