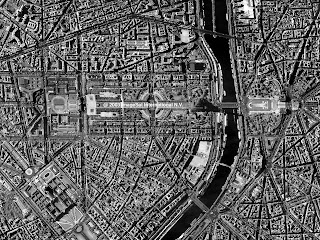 Almost the first words of Bruno Latour's Reassembling the Social: An Introduction to Actor-Network-Theory include this intriguing statement:


This somewhat austere book can be read in parallel with the much lighter Bruno Latour and Emilie Hermant (1998), Paris ville invisible, which tries to cover much of the same ground through a succession of photographic essays. It's available online in English (Paris the Invisible City) link.

This multimedia essay is fascinating, and equally so for the suggestion that it somehow illustrates the main ideas of Reassembling the Social. Since those ideas are fundamental to "actor-network theory" and to the theory of assemblage, it is worthwhile spending some time on the multimedia essay.

The presentation is described as a "sociological web opera." Here is how Latour describes its purpose:


The aim of this sociological opera is to wander through the city, in texts and images, exploring some of the reasons why it cannot be captured at a glance. Our photographic exploration takes us first to places usually hidden from passers-by, in which the countless techniques making Parisians' lives possible are elaborated (water services, police force, ring road: various "oligopticons" from which the city is seen in its entirety). This helps us to grasp the importance of ordinary objects, starting with the street furniture constituting part of inhabitants' daily environment and enabling them to move about in the city without losing their way. It also makes us attentive to practical problems posed by the coexistence of such large numbers of people on such a small surface area. All these unusual visits may eventually enable us to take a new look at a more theoretical question on the nature of the social link and on the very particular ways in which society remains elusive.

We often tend to contrast real and virtual, hard urban reality and electronic utopias. This work tries to show that real cities have a lot in common with Italo Calvino's "invisible cities". As congested, saturated and asphyxiated as it may be, in the invisible city of Paris we may learn to breathe more easily, provided we alter our social theory.

If one wants to work through the presentation it is necessary to download the PDF that contains the text of the essay, to be read in conjunction with the photography and images at each stop (link). Now we are ready to run the multimedia version (link).

Here is a screenshot from Plan 9: 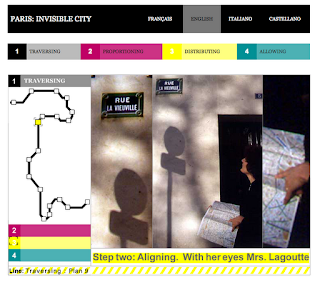 And here is the accompanying text:

With her eyes Mrs. Lagoutte looks at the name "rue la Vieuville" in white letters on a blue background. With her forefinger she points at the same name "rue la Vieuville" in bold type on the map she's holding with her other hand. With a quick movement of the chin she accommodates her gaze to these two very different texts: one, written diagonally on the page, is 1mm big and requires short-sightedness; the other, horizontal, is 6cm high and requires long-sightedness. A miracle! The two match, letter for letter, despite the glaring differences. She's arrived! This is the street she was looking for... and here's number five! In a single glance at her map she embraces the entire eighteenth arrondissement. By lifting her head she sees only a white wall, very much like all the others, that she couldn’t have identified without having been born in the neighbourhood or living there for a long time. Fortunately she also sees the street nameplate and the name written on it. What does she see? What is she touching with her forefinger?

The images in the frame switch with each movement of the mouse. They do not have an apparent order; instead, the viewer gets a rush of images at each stop. It takes attention to register even how many images are presented.  [It is possible this is an artefact of the web engine -- the "Distributing" sequence provides a scroll bar of images within the frame, but this is lacking in "Traversing." This would be ironic, analogous to the representational errors Latour identifies in maps and signposts!]

So go ahead -- take the journey and come back for some discussion! 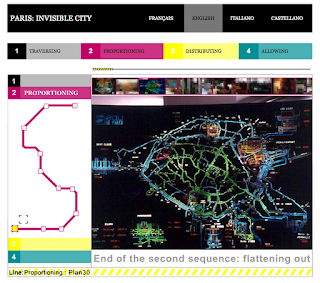 So what does the production show us? What has Latour illustrated in this work that "covers much the same ground" as Reassembling the Social? Here are a few fairly superficial observations.
And here is a fascinating bit that places the circulation of French Sociological Theory within the city:


For instance, here in the group formerly headed by Mr. Raymond Boudon, social phenomena consist of individual aggregations that produce perverse effects through a series of involuntary transformations, without for all that forming social structures. Further on, with Mr. Pierre Bourdieu at the Collège de France, individual action must always be situated within a field that may not determine it but that is the only thing to give it meaning. If we go up the Rue Laplace to the CREA, to Mr. Jean- Pierre Dupuy, we notice that structures do exist but through a phenomenon of self- organization resembling neither aggregation alone nor the field. There's nothing shocking about this dispersion: a sociogram of Parisian cosmologists would show no more agreement on the evolution of white drawf stars or the origins of the Big Bang. Moreover, the matter – identified, isolated, transformed – on which each of these laboratories works differs entirely: here, statistics and stylized examples; there, extensive inquiries by questionnaire; elsewhere, models borrowed from economics. The word ‘sociology’ has all the characteristics of a faux ami, and its definition will change again if we go down the Montagne Ste. Geneviève to the GSPM, to Luc Boltanski and Laurent Thévenot, on the other side of Luxembourg, or at the bottom end of the Boulevard St. Germain, to visit Mr. Michel Crozier's group, or else if, in a rare act of open-mindedness, we went up the Boul'Mich to have a coffee with the researchers at the CSI, at the Ecole des Mines. Despite the megalomania to which the social sciences are so partial, there would be little sense in saying that just one of these laboratories had summed up all of Society. (Plan 30)

This is a fascinating and open-ended piece of work -- not philosophy, not sociological theory, not pure artistic creativity; and yet some of all of this. Do other readers have their own interpretations of the work and its significance within ANT theory and the theory of assemblage?

Here is a lecture by Latour on ANT theory at USC. (The audio is better when Latour begins speaking.)