Critical theory in the Frankfurt School 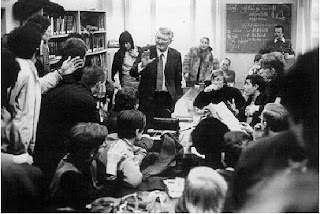 An earlier post raised the question of the meaning of the word "critical" in Roy Bhaskar's theory of critical realism. The most extensive discussions of the epistemology of critical theory occurred in the post-Marxist debates within the Frankfurt School, and Raymond Geuss presents those debates with great clarity in The Idea of a Critical Theory: Habermas and the Frankfurt School (1981).

Here is the general definition that Geuss offers:


A critical theory, then, is a reflective theory which gives agents a kind of knowledge inherently productive of enlightenment and emancipation. (2)

Critical theories aim at emancipation and enlightenment, at making agents aware of hidden coercion, thereby freeing them from that coercion and putting them in a position to determine where their true interest lie. (55)

The idea of enlightenment here is related to achieving accurate knowledge of one's place in the world -- "to determine what [one's] true interests are". And emancipation in this context means having the epistemic tools necessary to make one free -- to change the world and the structure of governing social relations in ways that increase one's ability to live and develop freely. So critical theory is a body of knowledge that permits people to move in the direction of greater autonomy and self-definition. And it is a body of knowledge that penetrates through the obstacles and forms of mystification that prevent individuals in dominating social relations to accurately perceive their situation.

The paradigm case of a critical theory, according to Frankfurt School theorists, is Marx's presentation of the political economy of capitalism. Capital: Volume 1: A Critique of Political Economy provides a basis for understanding how exploitation takes place within the ostensibly free social relations of capitalism; how the class system works; how the fetishism of commodities works to systematically obscure th exploitation and inequality inherent in the property relations of capitalism; and how the dynamics of capitalist competition lead to central tendencies in capitalist society (industrial reserve army, falling rate of profit, immiseration).

The critique of ideology is a core function of critical theory. Ideologies are the systems of ideas and belief that class societies have developed to redescribe and conceal the real workings of the social order. Individuals in every historical period require mental frameworks in terms of which to understand and represent the social structures and relations within which they live. Human beings are reflective, cognitive actors. They need to make sense of the things that influence their lives -- the powers of others, the access they have to material resources, the forms of respect or disrespect that characterize interpersonal relations. Marx and the theorists of the Frankfurt School described these mental frameworks as ideologies; and they worked on the assumption that ideologies are tilted in favor of specific powerful groups in society. Religion and myth serve ideological functions; but so do large, pervasive social assumptions about how things work. In the United States there are certainly ideological systems of belief in terms of which many people understand immigration, race relations, and urban-rural inequalities.

Geuss provides a very careful and illuminating discussion of the nuanced ideas about ideology that were constructed by Frankfurt School theorists, including Jürgen Habermas. This is useful for a number of reasons. First, the concept of ideology is often brought forward without a very specific meaning, and Geuss's analysis is useful in this context. But Geuss's analysis is also a valuable contribution to an issue that has come up frequently in earlier posts in UnderstandingSociety: the need to have more nuanced and adequate theories of the subjectivity of the actor. The social frameworks of knowledge through which individuals make sense of their social relations are certainly an important component of this topic.

Critique of ideology is an essential part of critical theory in the definition offered above. When individuals are preoccupied with social beliefs and expectations that conform badly to the real nature of their social relations, they achieve neither enlightenment nor emancipation. Here is Geuss's analysis of ideological critique as developed by the FS.
Geuss raises a key question about critical theory: what is the epistemic status of such theories? To what extent can evidence and logic allow us to argue for the truth or falsity of a given critical theory?

In other words, critical theories are aimed at furthering a set of fundamental human values (freedom, emancipation, enlightenment); but they are intended to have rational epistemic force as well. It is expected that theorists and users of theory will give an honest allegiance to evidence and logic, and will be prepared to abandon aspects of their theories if they are refuted. And Geuss admits that this set of epistemic values are in some tension with the democratic and enlightenment values embodied in the critical theory (78).

There is one more idea associated with the general definition provided above, the idea of a reflective theory. Here the idea is that a critical theory needs to pay attention to its subject matter; but it also needs to pay attention to the conditions of knowledge that surround the theory as well. The critical theory should give us some idea of how it could be arrived at in normal social circumstances.

So reflective here means "attentive to the conditions and processes through which the theory itself is discovered and assessed".

This is an important set of ideas that helps the problem of better understanding and changing society. One way of thinking about the Frankfurt School is that they were post-positivist and provided some new ideas about how to think about social science and social theory in ways not chained to the assumptions of positivist philosophy of science. But many of these theorists presented ways of framing the nature of contemporary society that were post-Marxist as well. They continued to be concerned with key Marxian ideas like exploitation, alienation, and false consciousness. But they also sought out theoretical frameworks that went beyond economics and historical materialism.

You write, "Ideology critique . . . differs significantly in cognitive structure from natural science, and requires for its proper analysis basic changes in the epistemological views we have inherited from traditional empiricism . . ."

What changes do you mean? Do you mean procedural, technical differences, such as the differences one would find between the physical sciences and, say, psychology, or cosmology? I.e. there are certain ways of doing experiments in physics that are unavailable in psychology because of ethics, and unavailable in cosmology because of the subject matter.

Or do you mean something more fundamental?

For an *epistemology* of critical theory, I like Brian O'Connor's book: http://www.amazon.com/Adornos-Negative-Dialectic-Possibility-Contemporary/dp/0262651084.

The Authoritarian temperament,' studied by the urban center faculty within the Nineteen Forties and Nineteen Fifties in America, ready the manner for the following warfare against the masculine gender promoted by philosopher and his band of social revolutionaries underneath the pretext of 'women's liberation' and also the New Left movement within the Sixties. BTW, Thanks for the post.

(Hoping to please You)
The contribution of Critical Theory in understanding society
http://costruttiva-mente.blogspot.com/2017/03/the-contribution-of-critical-theory-in.html