Crozier on actors and organizations 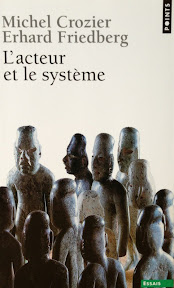 I ran across a book by Michel Crozier and Erhard Friedberg I hadn't read before in a Dijon bookstore, L'acteur et le système: Les contraintes de l'action collective (French Edition).  (Yes, in France they still have great academic bookstores!) It was the book's title that caught my eye -- "actor and system". Crozier and Friedberg's premise is that actors within organizations have substantially more agency and freedom than they are generally afforded by orthodox organization theory, and we can best understand the workings and evolution of the organization as (partially) the result of the strategic actions of the participants (instead of understanding the conduct of the participants as a function of the rules of the organization).

In fact, they appear to look at organizations as solutions to collective action problems -- tasks or performances that allow attainment of a goal that is of interest to a broad public, but for which there are no antecedent private incentives for cooperation. Organized solutions to collective problems -- of which organizations are key examples -- do not emerge spontaneously; instead, "they consist of nothing other than solutions, always specific, that relatively autonomous actors have created, invented, established, with their particular resources and capacities, to solve these challenges for collective action" (15). And they emphasize the inherent contingency of these particular solutions; there are always alternative solutions, neither better nor worse.

This is an appealing point of view to me for several reasons. First, it is consistent with the view I've advocated for at various points about the plasticity of institutions (link). Second, it seems to fit very well with the ideas associated with methodological localism (link): Crozier and Freidberg seem to add support to the view that we can best understand a range of extended social phenomena as the result of the actions and thoughts of the socially situated and socially constituted actors who make up its various locales. Finally, though, the degree of freedom the authors attribute to actors seems to contradict another aspect of organizational theory that I've incorporated into my own thinking: the idea that there are in fact strong microfoundations for the workings of the regulative framework of an organization. On my account these microfoundations take the form of internally realized enforcement mechanisms like auditors, supervisors, and discipline administrators. The freedom of the actors is reduced by the mechanisms of enforcement through which their performance of their roles is overseen.

The authors use the idea of the "narrowing the field of play" ("champs d'interaction aménagés") frequently to describe the workings of an organization. Essentially this seems to imply that an organization commonly succeeds in ruling out certain strategies for the participants while leaving open others. And perhaps this converges with the point just mentioned: organizations succeed in limiting the freedom of choice of participants, though not down to a singleton set. For example: a junior faculty person may choose a strategy of flattering the department chair to increase the likelihood of receiving tenure; but he/she cannot threaten the chair with bodily harm unless support is provided.

So the framework and theory that Crozier and Freidberg offer seems to provide a good illustration of several insights into the nature of the social that have emerged from my own efforts to formulate a better approach to the philosophy of social science.  This is, of course, a somewhat personal reason for favoring a theory, but it gives me a motive to work through the book more carefully.

Here are a few passages that capture some of the unique perspective they offer.

"In short, this method is not so much aimed at organizations as a specific kind of social thing, as at the organized actions of people. This is the true subject of this book."

"This essay is ultimately a reflection on the relationships of actor and system. It is in effect concerning the existence of these two opposing poles that determines the method we follow. The actor does not exist wholly outside of the system which defines his freedom and the rationality that he can use in his actions. But equally the system does not exist except through the actor who sustains it and gives it life, and who alone can change it. It is the juxtaposition of these two logics which gives birth to the constraints on organized action that our method reveals." 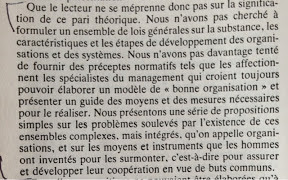 "The reader should not misconstrue the significance of this theoretical bet. We have not sought to formulate a set of general laws concerning the substance, the properties and the stages of development of organizations and systems. We do not have the advantage of being able to furnish normative precepts like those offered by management specialists who always believe they can elaborate a model of "good organization" and present a guide to the means and measures necessary to realize it. We present of series of simple propositions on the problems raised by the existence of these complex but integrated ensembles that we call organizations, and on the means and instruments that people have invented to surmount these problems; that is to say, to assure and develop their cooperation in view of the common goals." (11)

There are resonances in this text of other voices on the topic of the power of organizations. Foucault is mentioned only four times, and then only in footnotes; but the authoritarianism that Foucault attributes to modern institutions seems to be very much the point of view that Crozier and Friedberg want to refute. The book to which they refer is Discipline & Punish: The Birth of the Prison, a work that emphasizes the total control to which modern organizations aspire. Crozier and Friedberg reject this view in favor of one that emphasizes the agency and freedoms of the actors situated within the organization. And they take this to be an empirical fact, not a normative one.

The other voice that seems to be in the background in this argument is that of Bourdieu, who is mentioned not at all. Here the relationship is more ambiguous. The emphasis on agency within constraints that Crozier and Friedberg insist upon seems resonant with Bourdieu's theory of practice in Outline of a Theory of Practice (1972). But Bourdieu also advocates for some of the themes of domination and control that Foucault highlights; and to this aspect C&F are equally opposed.

This isn't to say that C&F deny the facts of power and exploitation that are so important to Marxist theory as well as Foucault and Bourdieu; in fact, chapter two is dedicated to an analysis of power. 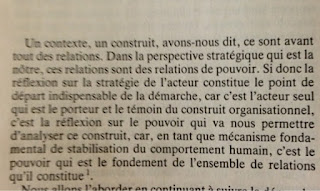 So they don't reject the facts of power and constraint. Rather, they reject the idea that these social systems of power leave actors with no alternative choices. In this respect I would put C&F in league with the position taken by James Scott in Domination and the Arts of Resistance: Hidden Transcripts. Agents are capable of forming their own perceptions of the social relations in which they find themselves; and they are capable of acting strategically in trying to gain advantage within those relations.

The final relationship that seems both important and somewhat invisible in the text is to Raymond Boudon, one of the primary advocates of rational choice theory in French sociology. C&T are interested in strategic action on the part of deliberative agents, and this brings their theorizing into a degree of alignment with game theory and the work of Boudon. This is not to say that they uncritically accept the premises of formal game theory. In fact they offer their own interpretation of the prisoners' dilemma, with a summary conclusion that it is an error to look at actors as socially disconnected individuals lacking ties to each other that would facilitate cooperation. But the broad framework suggests the importance of reasoning about the choices individual actors make, which leads to a degree of parallel with enlightened versions of rational choice theory.

In short, this is a highly stimulating book with complex relationships to other strands of contemporary French sociology. And its insights still seem important more than forty years after publication.
Posted by Dan Little at 6:54 PM

This was the first book I ever translated, back in 1977, under the title "Actors and Systems."

Thank u you so much for your linking of James Scott and michel crozier. The puzzle of relations between individual actions or passive resistance of the small one and the organization is getting clearer.